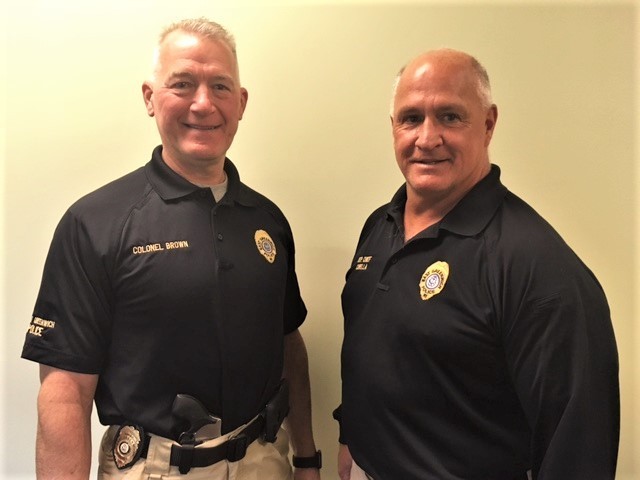 Above: EGPD Dep. Chief Stanley “Skip” Cirella, right, with Chief Steve Brown. Cirella retired April 30; he and Brown attended the police academy together and have served in EG for their entire careers.

Stanley “Skip” Cirella, EGPD deputy chief since 2014, retired Friday (4/30) after nearly 26 years on the force. He is taking a job providing court security at the U.S. District Courthouse in Providence.

Former Town Councilman Mark Gee congratulations Skip Cirella after he was sworn in as deputy police chief in 2014.

Cirella studied criminal justice as an undergrad at Roger Williams but didn’t go directly into law enforcement, instead opting to work as a private investigator for several years. But in 1995 he was hired by EGPD and one of his classmates at the police academy was none other than Chief Steve Brown.

‘We’ve been joined at the hip ever since,” joked Brown at the virtual Town Council meeting Monday night. Then, more seriously, Brown added, “He’s been a valued member of this department and a great friend for many years and we wish him well.”

Town councilors offered their thanks at the meeting Monday, including President Mark Schwager, who said, “It was the dozens and dozens of small things he did around town … he was just a longstanding presence. We really appreciate the public service that he did.”

In a recent interview, Cirella said police work wasn’t just about “getting the bad guy.” Rather he said it was about helping people. “I just really enjoyed the customer service aspect of it,” he said. “It was assisting people on a day-to-day basis.”

During his career, he never once had to fire his gun at a suspect, he said. His biggest achievements were rescuing people – a woman and her pets in an apartment above the burning then-Roberto’s Pizza on Forge Road, aiding a man who lit himself on fire in front of 300 Main Street, and helping another man who fell out of a second-story window at the Greenwich Hotel, all actions for which he won commendations.

Things have changed a lot since Cirella became a police officer but he recognized that things always change, recalling that when he first joined the EGPD, older officers on their way out the door would remark about how much things had changed, saying “good luck” like the newbies were going to really need it.

Still, he said, “current events right now make it difficult for police officers. I try to take the totality of the circumstances. People are second guessing.”

Even his own daughter Cassie, a senior at Toll Gate High School, asked her dad why police fatally shot a 16-year-old Ohio girl who was wielding a knife.

“She asked me why [the officer] didn’t use his taser,” Cirella said. “These are questions I’m getting faced with even in my own house. I really think police officers are getting judged before they’re even doing anything.”

But Cirella didn’t hesitate to condemn what happened to George Floyd in Minnesota last year, when a police officer there – Derek Chauvin – had his knee on Floyd’s neck for more than nine minutes, resulting in Floyd’s death. Chauvin was convicted of murder earlier this month.

“I am 1,000 percent in agreement with the way that verdict went down,” Cirella said. “The handcuffs are on, the fight is over – we learned that in the academy 26 years ago. At the end of the day, they are handcuffed. There was absolutely no reason for that.”

Cirella suffered a very public tragedy in 2017, when his older daughter, Gianna, then just 16, died of sepsis, a deadly blood infection that seemed to come from nowhere. The entire state, it seemed, grieved for Gianna and her parents and sister Cassie.

Today, the Gianna Cirella Memorial Foundation raises money for sepsis research. Cirella said his wife, Tara, is the main force behind the foundation’s efforts but he helps in the background. COVID-19 restrictions put a pause on some activities last year but the foundation is back this year with its Gi-Strong 5K run/walk at Goddard Park on Mother’s Day, May 9. (You can register or learn more HERE.) And they hope to have news out soon about a golf tournament – Cirella ran the first one two years ago.

Meanwhile, he isn’t going to be kicking back in retirement for very long. He’ll be off for a whole two days before starting his new job in Providence on Monday.