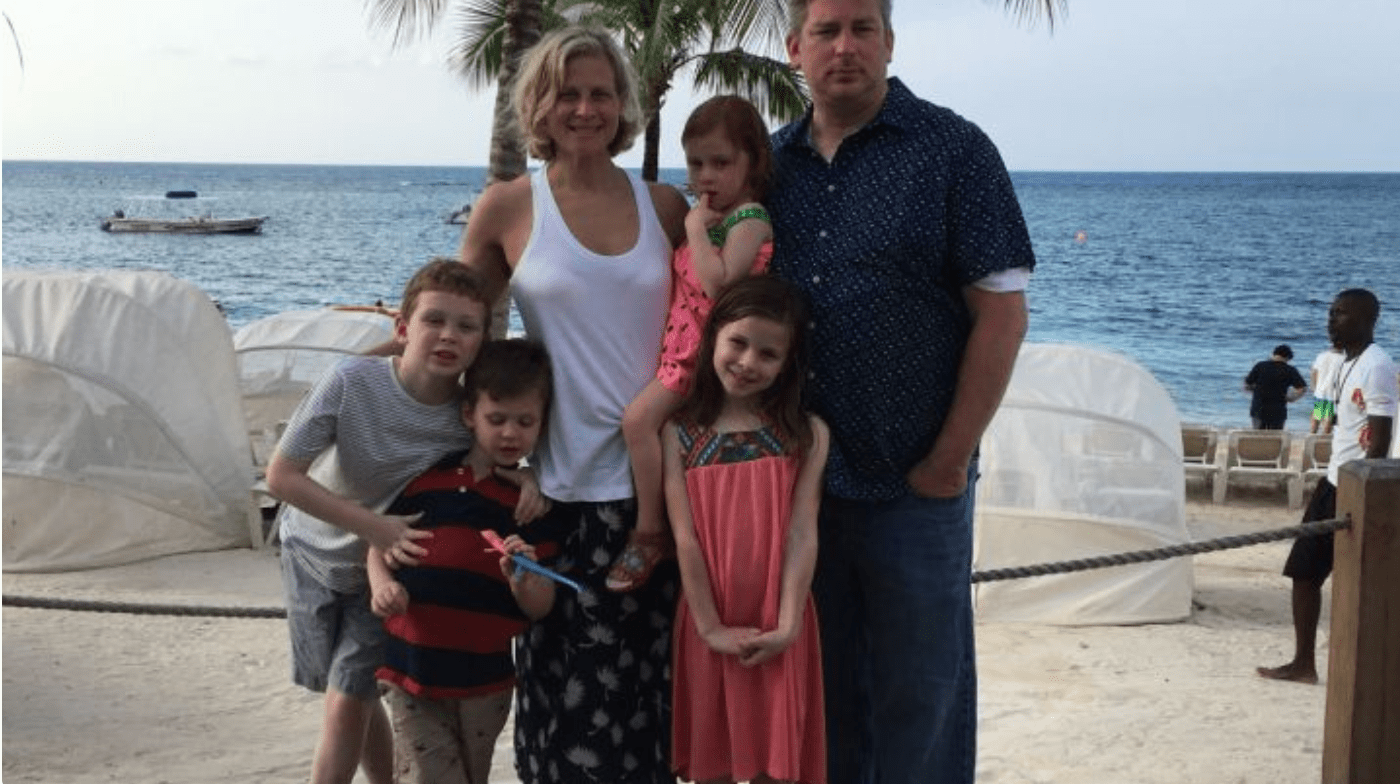 Josh Selle, 49, passed away suddenly early July 29. He leaves behind his wife, Sara Weintraub, and their four children, Parker, Hudson, Gigi, and Ruby; his son Benjamin Forest Selle of West Warwick; his father Terry Selle; and his sister Sasha Selle. Josh grew up in Providence.

Josh was a stay-at-home dad and a talented chef. He was also the glue holding together the Cedar Heights neighborhood in East Greenwich, where he and Sara made their home.

Neighbor and friend Kim Kinzie described it this way on Facebook: “My family moved to our neighborhood in 2012 and never could I have imagined that I was actually forming a second family…. When I first met Josh, I thought he was a quirky, funny guy. I enjoyed getting to know him at the bus stop each day, laughing at our shared knowledge of useless ‘80s trivia. I soon learned he was a chef and specialized in breakfast (my favorite meal). Josh treated all of us to many “sandwich parties” where he would ask you to bring three ingredients and would whip up these amazing creative sandwiches. He seemed at his most comfortable behind that grill cooking for his friends and family. I can picture his smile as he added bacon, jalapenos and/or pineapple to almost everything.

“My kids adored him, as he was like a second dad in many ways. He took my older son to Six Flags last year, led him and his friends in a Dungeons and Dragons campaign, and shared his wisdom about comics and movies. To my younger son, he was kind, funny Josh who made the best burgers and always had a place at his table for him. Telling my kids that he was gone was awful, because I know how much they loved him; how much we all did (and still do). I am sad beyond words, as this was so sudden…. We’ll miss you Josh….Cedar Heights will never be the same.”

Another neighbor, Jon Baumgartner, wrote this about his friendship with Josh:

“I met Josh only eight years ago, but the minute I met him, it felt like we had known each other our whole lives.

“We had only been in our new house three days when he, his wife Sara, and their four children came over to introduce themselves. The bond was instant. We spent countless hours together, becoming honorary members of their extended family. I could talk to Josh about anything, from obscure TV and deep cuts from even more obscure bands to theories on the latest Avengers films, to cooking advice, and the best hiking trails. He was always there for us, if it meant watching the kids for a bit, giving us a ride to pick up the car, moving heavy furniture, whatever.

His cooking was legendary. He had this otherworldly ability to put just the right pairings of ingredients together. I will always remember the one time I was ever skeptical. He told me he had a dream, and in the dream he made cheesecake burgers. He was very excited. I told him I didn’t think that was such a good idea. He made them anyway and they were absolutely divine, and I never doubted him again.

“He was kind, and caring, he genuinely listened to you, and remembered tiny little details about you. Sometimes he would text me, telling me to check my mailbox. I’d head out, and there would be a little present from him. Something he’d found while he was out that he knew I’d appreciate.

“I am absolutely gutted knowing he is no longer with us. His spirit will live on, and I will always cherish my memories of him.”

Jon’s wife, Maura Keating, wrote on Facebook that “Josh was one of the best people I have had the fortune to know.”

She continued: “Thank you for being my family. Thank you for letting me into your heart, for sharing your talent with me, your home, your family, all of the meals you magicked out of the air, the comic books we loved, the music and films that we argued about, the soda, the ideas, the bad jokes. YOU. I am broken without you.”

“Josh was a great dad and you could see how the kids all had a special bond with him,” said friend Joe Morel. “He really was an awesome chef. He usually was the one who got the “Dads” together for a night out and built up the community by throwing wonderful sandwich parties every year.

“He was also very creative and made all kinds of stuff for the internet. His memes, sometimes you understood them, other times you didn’t but they were always quirky and funny.”

“He was the heart and soul of our neighborhood,” wrote Jillian Bodoff. “He was each kid’s second dad, with his sarcasm, wit, amazing food, and warmth. We will all carry him in our hearts and miss him immensely. We love you, Sara, and we will love and watch over your children as Josh loved and watched over all of ours.

Josh’s life was celebrated recently with good food (of course!) and fireworks. According to his wife, Sara, “this was the perfect celebration of him…. It made our family smile and be at peace knowing he was with us in heart.”

A Go Fund Me was established for the Selle family. Find the link HERE.