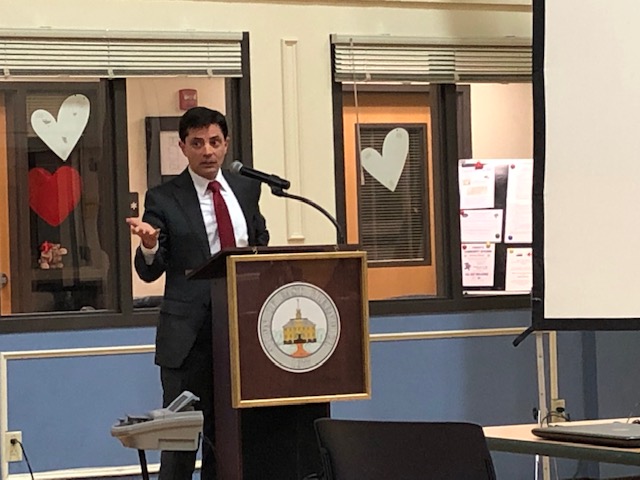 Above: Mike D’Amico during a Town Council budget presentation earlier this year.

His hiring by that city follows a pattern familiar to residents of East Greenwich, as Warwick has been in the throes of possible financial calamity, much as East Greenwich had been seven months ago. Shortly before D’Amico’s hire in EG, Sue Cienki (the former Town Council president who lost her bid for reelection in November) had said the town was bankrupt. In addition, relations with the firefighters union were at a impasse and had resulted in multiple lawsuits, arbitrations and grievance filings, as well as high legal bills. Seven months later, finances for the town and schools (D’Amico handled school finances also) have stabilized. The council approved a budget built by D’Amico that included a 21 cent residential tax rate increase. In addition, the council signed new contracts with the town’s five municipal unions that included multi-million-dollar long-term retirement benefit savings for the town. D’Amico was heavily involved in those negotiations.

D’Amico had applied to be town manager for East Greenwich but said Wednesday he had withdrawn from that process.

“I enjoyed my time with the town but I’m going to look for other opportunities,” D’Amico said before Solomon’s announcement.

D’Amico’s decision to apply for the town manager post had come with a complication: the Town Council had stipulated when it hired D’Amico that he would not be a candidate for the town manager job. The idea was to set a clean slate after what many, including a Superior Court judge, had decided was the flawed process undertaken by the previous Town Council (led by now-state GOP head Sue Cienki). 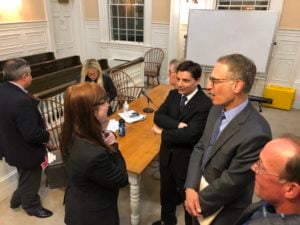 In that instance, Cienki’s Town Council had hired Gayle Corrigan and Linda Dykeman as consultants in spring 2017. Two months later, they hired Corrigan to serve as town manager after reaching a “separation agreement” with former Town Manager Tom Coyle. Within days, Corrigan fired the town’s finance director and hired Dykeman to serve in that post.

D’Amico said he decided to apply for the town manager position (which is currently being filled on an interim basis by Public Works Director Joe Duarte) because he had enjoyed working at Town Hall and thought he had skills that would benefit the town. D’Amico served as consultant through June.

“I liked everyone in Town Hall and I thought I could continue to do a good job to serve the town,” he said.

D’Amico said he had not been interviewed for the position but also not been notified that he was not being considered for the job.

Council Vice President Mike Donegan said the council had heard from D’Amico Wednesday morning that he was withdrawing from the town manager search.

“Consistent with the RFP, he was not eligible for the position and that’s why we didn’t interview him,” Donegan said.

Council President Mark Schwager said the council had interviewed seven candidates so far. He declined to talk about specific applicants, including D’Amico.

Councilwoman Caryn Corenthal said she was sorry D’Amico had withdrawn his name for consideration for town manager.

She said she understood his hiring would not have been a legal issue, despite the Council’s original stipulation against considering the person hired as consultant as a possible town manager.

“He did outstanding work for the town and he will be a great addition to Warwick,” she said.