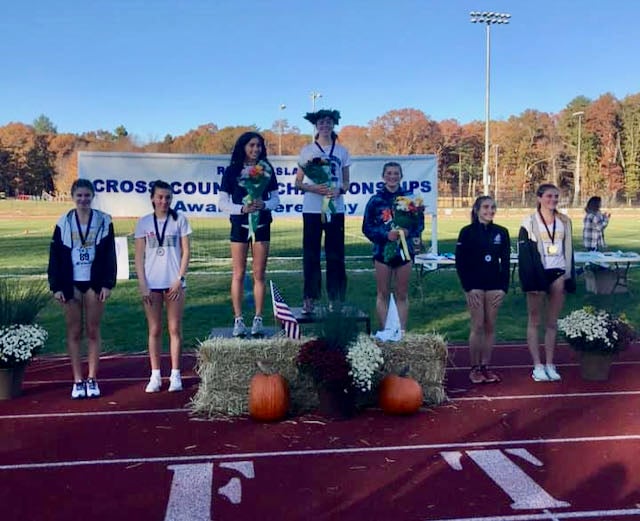 For the last official Rhode Island meet of the 2021 Cross Country season, EG’s Reese Fahys captured first place in the State meet for the second year in a row, running a 17:40.7 at Ponaganset High School Saturday (33.10 seconds ahead of second place finisher Sophia Gorriaran from Moses Brown, who finished with a time of 18:13:80. EG’s Rylee Shunney placed third with a 18:17:35 time.

The EGHS harriers had taken on Ponaganset’s famous covered bridge course the prior weekend for Class B and Junior Varsity State meets, where both the Girls and Boys teams qualified to run in the Nov. 6 state meet (and where the Girls and the JV Girls both placed first).

“I think my favorite memory of the season was watching our JV squad dominate and win JV states at Ponaganset this year,” commented girl’s coach Erin Terry, “It was so awesome to see girls believe in themselves and support each other and come together as a team to accomplish that goal. I am very proud of that group.” 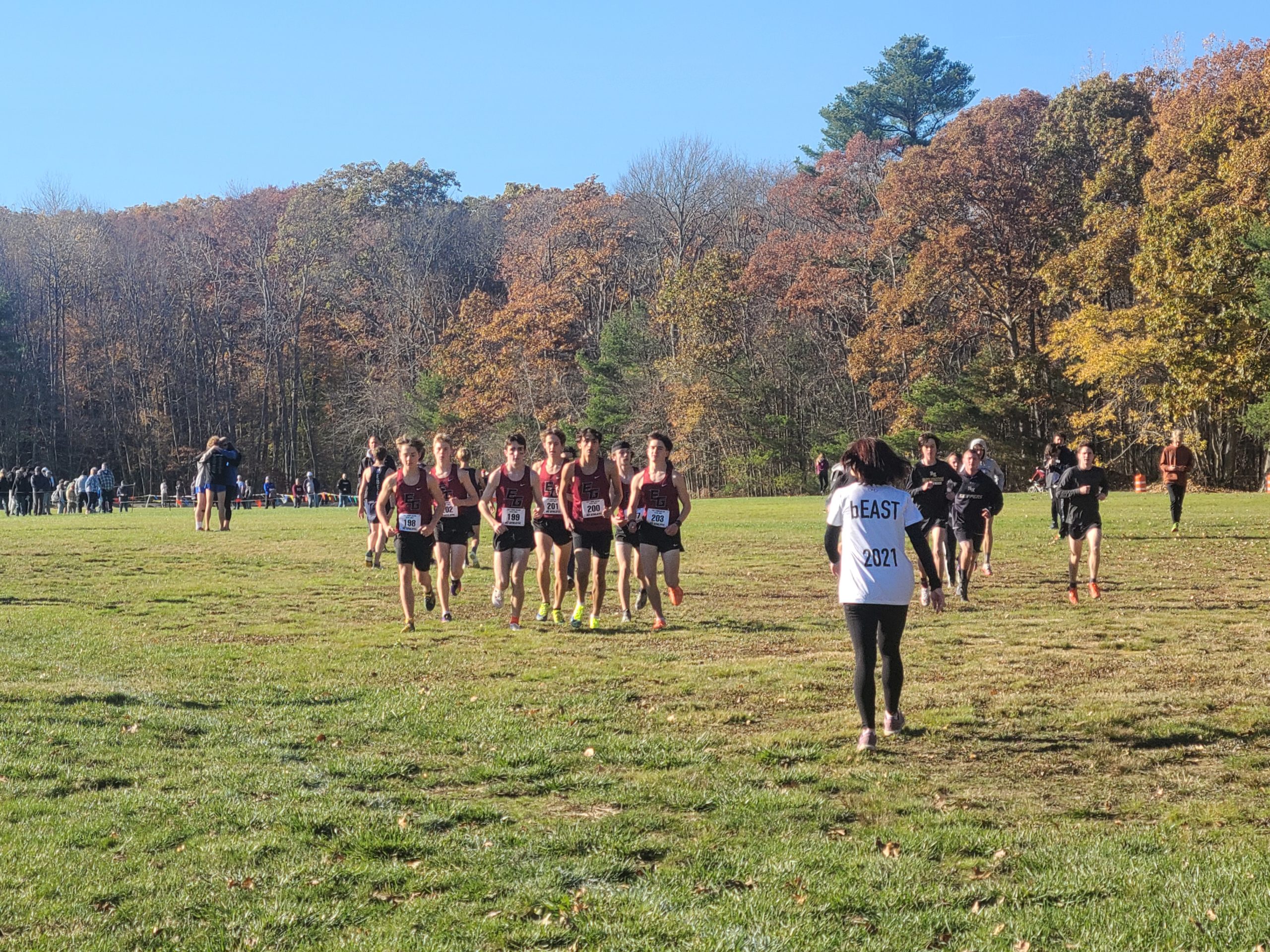 The Boys warm up Saturday, encouraged by assistant coach Jeanine Connolly (in the “bEAST” t-shirt).

At States, the Girls placed 3rd overall with juniors Reese Fayhs and Rylee Shunney finishing 1st and 3rd respectively. The girl’s team will be moving on to compete in the New England Championships this Saturday (11/13). The boy’s team finished 12th with junior Nick Martin leading the team in 20th place.

While the time for fall sports is drawing to a close, many of the runners spoke of great experiences this season.

The hard work for the team begins soon after the school year ends, meeting rain or shine all summer long to run. Despite the summer dream to sleep in late, the athletes choose to wake up for practice at 8 o’clock and beat the heat. From runs lasting over an hour to 21-3 (a core workout consisting of 21 pushups and 3 one-minute planks), the team works hard to prepare for the season ahead.

While every runner has a favorite distance, team members agree – the longer is better.

“I really love long runs,” said senior Esme Ginsburg, “It’s a great time to talk to my teammates and enjoy nature in the morning. It’s also a good way to get the day started.”

Fahys, a junior, echoed those sentiments: “I like long runs because it’s relaxing and I feel accomplished after running a lot of mileage.”

However, the team does have to cut it short on some runs and focus on strength and speed in preparation for their racing season once the school year begins. One of the most important things on the runner’s mind come race day is what to have for breakfast.

“I normally eat a bagel with almond butter and jelly in the morning before races,” said Shunney, “but I always go to Cheerios to snack on because they are so light.” 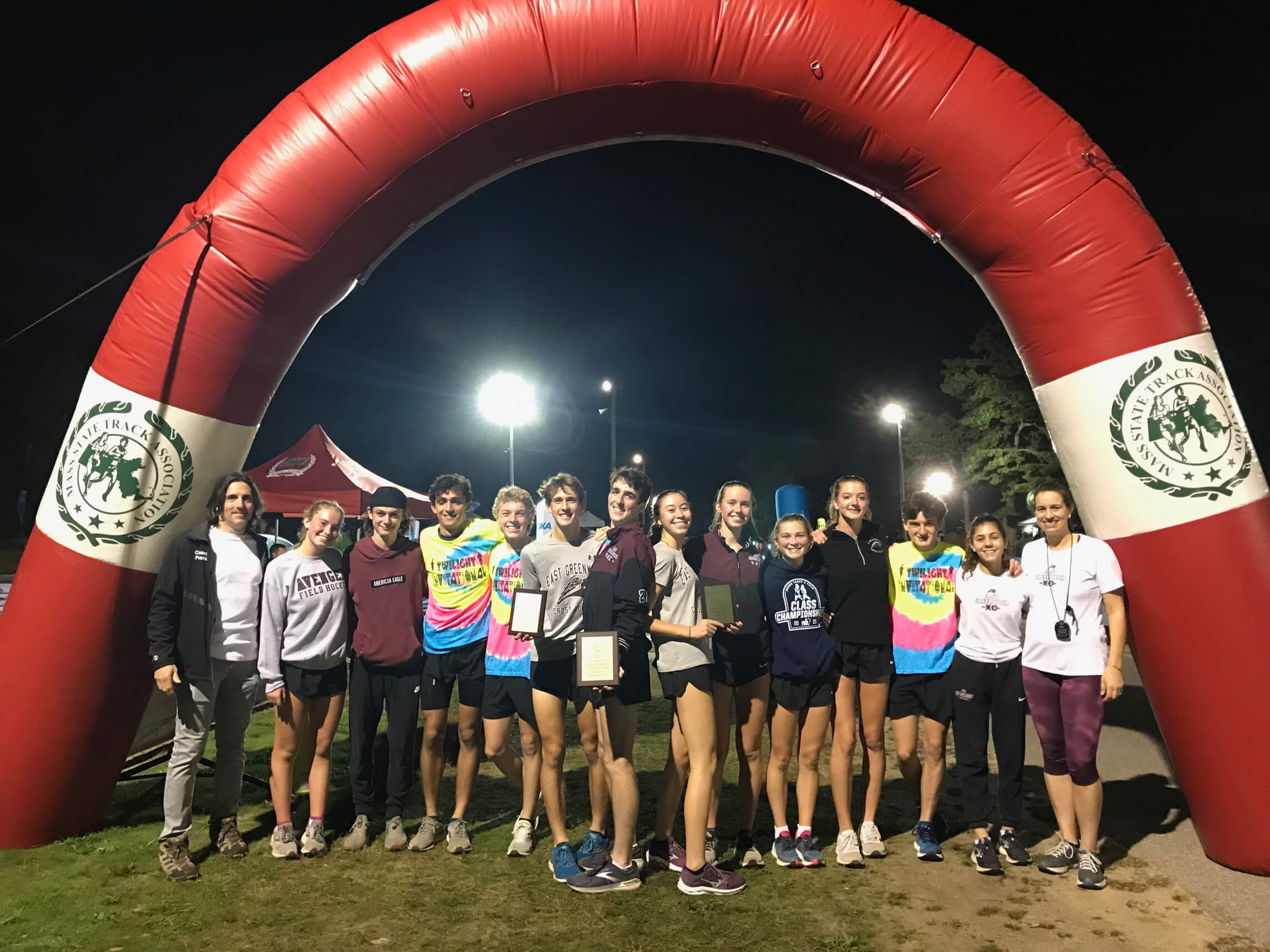 Leading up to states, the team competed in an assortment of different races across Rhode Island and Massachusetts.

“My favorite course was Deerfield Park in Smithfield,” said Luke Allen, a freshman, “I always do very well there, and it has great terrain. The surrounding area is very nice.”

Deerfield Park was home to the team’s first race of the season, the Injury Fund meet, as well as the Freshmen States.

The Varsity team also tackled the Wood’s Trail Run in Thetford, Vt., and the Great American Invitational in N.C.

“Thetford is arguably one of the hardest courses that we run but it is a wild ride,” said Ginsburg, “Not only is there the gorgeous scenery of Vermont but it varies so much and it’s really challenging which isn’t always a bad thing.”

Fahys described The Great American saying, “It was a really fast course with a good amount of uphills too. It was also in the woods with a wide trail so it had cool scenery.”

Racing requires both physical and mental stamina from the athletes. To prepare, some get motivated by the camaraderie of other team members or listen to pre-race anthems.

Alicia Chen, a sophomore, takes the latter approach. “I like to listen to music the night before. It helps me envision how I want my race to feel,” she said.

“I try to picture myself on the course keeping steady,” explained freshmen Max Herman, “but I also remind myself on the start line that I’ve already done everything I can to give myself the best race possible so now it’s time to let my body take over.”

For many on the team, the most important part of the cross country season is the bond that the team builds, more than the wins and loses.

As Shunney said, “Watching myself and others be successful and have fun this season, is the most rewarding part, along with all the friendships and memories we make at practice and at meets.”

We wish the Lady Avengers the best of luck at the New England Championships!

Morgan Walsh, a junior at EGHS, has been writing for East Greenwich News since 2020. She was a member of the 2021 EGHS Cross Country team.