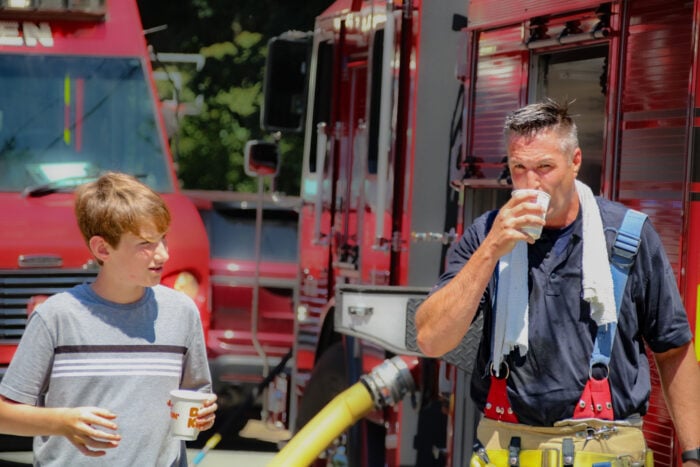 Above: Capt. Tom Bailey gets some cold water from neighbor Haven Knapp during a break from a house fire on Crestridge Drive Saturday, July 9. Credit: Tim Cure

No one was home when a neighbor noticed smoke at the roofline Saturday morning.

Firefighters put out a fire at 25 Crestridge Drive Saturday. No one was home at the time of the fire, but one EG firefighter was hospitalized for heat exhaustion.

According to EGFD Capt. Tom Bailey, it was fortunate the weather wasn’t hotter but 80 degrees was still plenty hot when dealing with a structure fire. The firefighter spent Saturday night in the hospital; he was able to go home Sunday, Bailey said.

It had already been a busy morning for the EG Fire Department when a call came in to dispatch about a possible house fire on Crestridge Drive. Both rescue trucks were busy, and both engines were out on other calls, but according to Bailey, the dispatcher sensed this was a legit structure fire and got busy finding help.

Bailey was with Engine 1, just leaving another call. The two-man Engine 1 team headed over to Crestridge and could see smoke coming from the roofline. Engine 2 arrived a few minutes later – a key development since no one could enter the building until there was at least one other firefighter on hand.

There was heavy smoke at the eaves of the single family ranch but it was difficult to tell just where the fire had started – the first floor or the basement.

“It was a really tricky fire,” said Bailey. “We had to get it from the first floor and the basement…. We were fortunate no one went through the floor because it was burned through.”

Bailey credited NKFD for the mutual aid it provided, including three engines, a ladder truck and a rescue.

Because the EG rescues were on other calls, a rescue truck from West Warwick FD took the EG firefighter to the hospital.

Bailey credited the neighbor who reported the fire – they relayed critical information to dispatcher Patrick Sullivan that the front door was warm to the touch – and Sullivan’s fast response.

“Dispatcher Patrick Sullivan did an astounding job made some smart decisions early on getting mutual aid, given the fact our rescues were not available right away,” said Bailey.

Among the EG firefighters who helped out Saturday were Lt. Bill Purcell and Lt. Ryan Grady, and firefighters Kevin King, Dan Andrade, Matt Mascariote, and Shane Newton (Newton is just out of the EGFD “academy,” so this was his first fire).

Bailey also said EG police did a “stellar” job – they were first on scene and helped keep firefighters hydrated while they worked the fire. In addition, a couple of youths from the neighborhood stepped up to provide water to firefighters.

“As we were coming out [of the house], there was an EG police officer and a couple of neighborhood boys helping us get hydrated,” said Bailey. “I was glad to see them when I came out.”

Providence Canteen also was on the scene, providing beverages and cold towels for the firefighters to help them cool down.

The house, with extensive smoke, water and fire damage, is not habitable. EG Fire Marshal Stephen Hughes and someone from the state fire marshal’s office were at the scene but as of Sunday no cause had been identified. 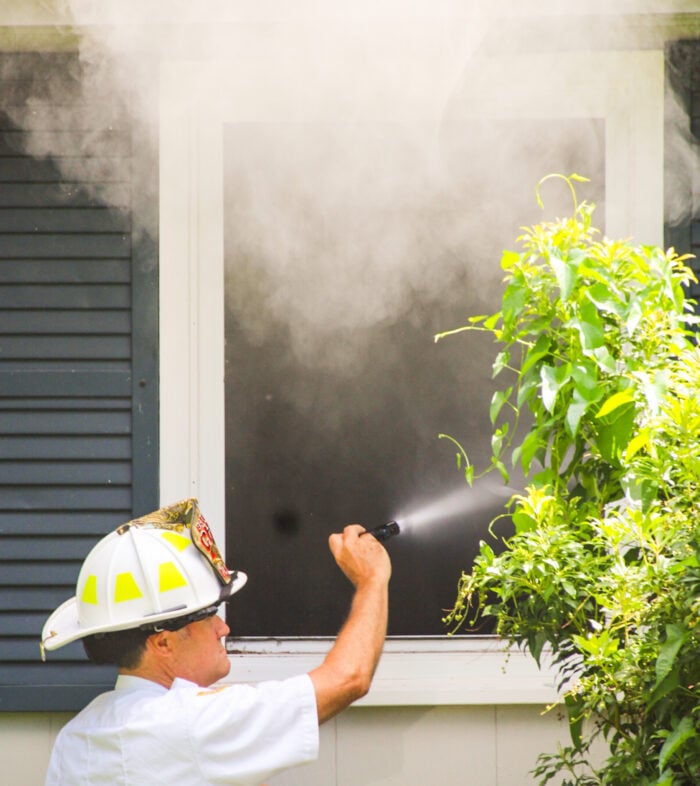 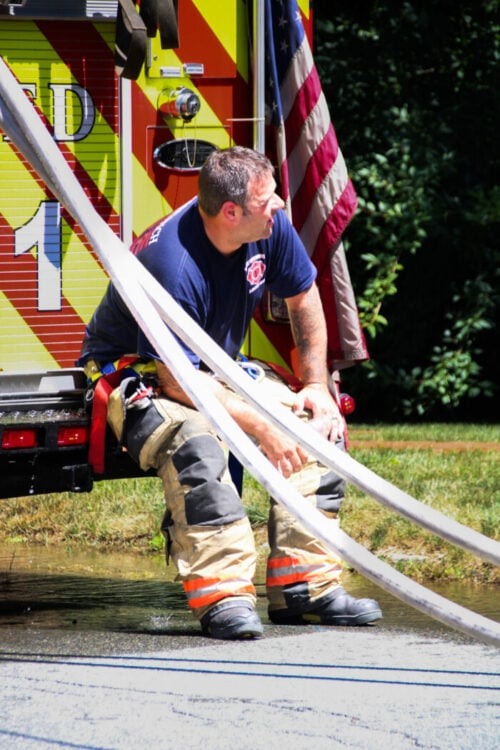 Matt Mascariote gets a rest while working the Crestridge fire. Credit: Tim Cure 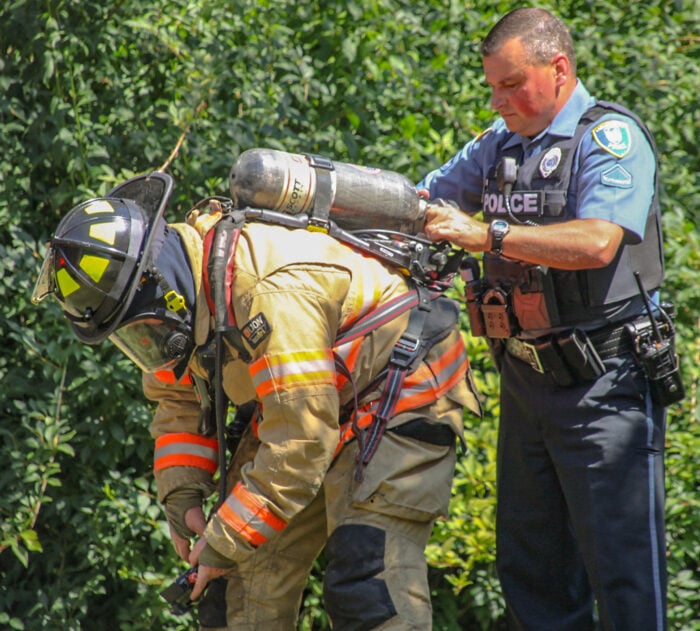 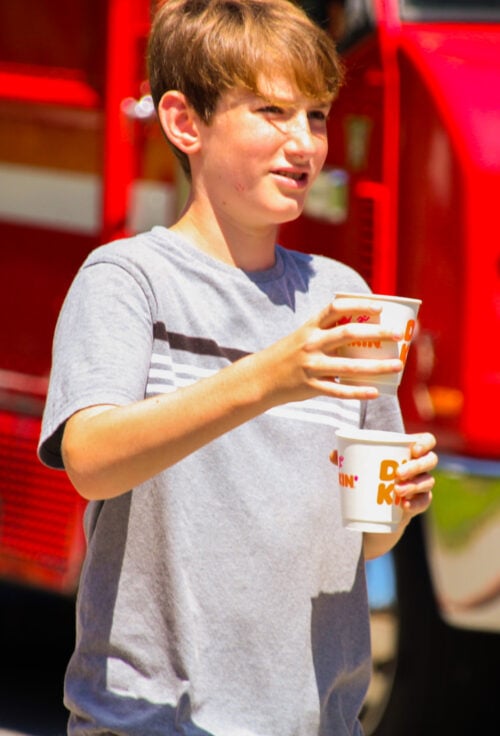 Water, anyone? Haven Knapp helps out at the fire. Credit: Tim Cure 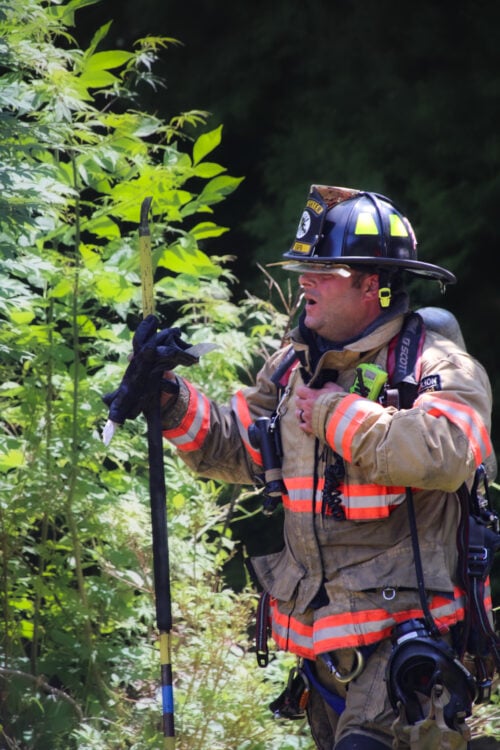 Lincoln Knapp, right, fills cups with water from the Providence Canteen truck, ready to pass them to his brother, Haven. The brothers live in the neighborhood. Credit: Tim Cure