Coyotes in the ‘Hood 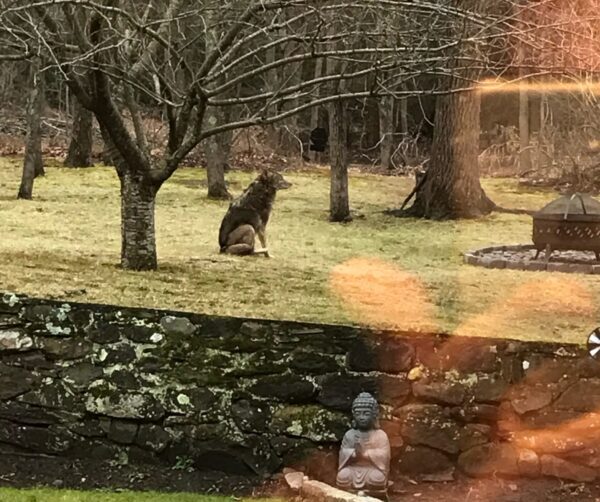 Above: A coyote just beyond the backyard of a house on Virginia Avenue that abuts the East Greenwich Cemetery.

There have been a number of social media posts of late – including from our own Instagram page manager, Stephen Susi – on the prevalence of coyotes around town. Sightings have been particularly numerous on the streets abutting the East Greenwich Cemetery off First Avenue, but also on the Hill and on the streets behind Cole Middle School.

What’s been remarkable is they are appearing during the daytime, running right down the middle of Virginia Avenue, for instance.

While it’s been alarming for residents, especially those who have ended up face-to-face with a coyote, state officials say in most instances coyotes are not a threat to people.

Rather, typical prey for coyotes are rodents and cats, according to DEM wildlife specialist Charlie Brown. Do coyotes go after dogs? Small dogs maybe, he said, those 15 lbs or less. Or dogs that are left outside unattended at night. Coyotes attack, he said, in “random, opportunistic events where the dog is at a distinct disadvantage.”

Sometimes, it’s the dog that instigates the fight, Brown said. A dog might chase a coyote and then the situation changes and the dog suddenly is in for more than it bargained for. Male coyotes don’t get more than 50 lbs, typically, Brown said. Females are in the 35 to 40 lb. range. But they can look larger right now because they have a winter coat.

Knollwood Drive resident Katie Yeaton recounted a recent confrontation between her dogs and a coyote.

“One of the coyotes was in my driveway a few weeks ago at dusk. My dogs were barking at it – luckily we have a fence – and it was just standing staring at them from about 15 feet away until I scared it away.”

She said she did that by yelling loudly. “Before I saw [the coyote], I could hear it rustling in the leaves on the side of my driveway. There is a family of bunnies that live over there so maybe it was hunting.”

But why are coyotes hanging out in residential neighborhoods right now?

Brown said there’s a biological reason and, possibly, a man made reason. First, to the biology. It is this time of year that parents kick their pups out into the world as they prepare for a new breeding season, which will begin in February. Coyote parents keep their pups close for months and then – it’s time for the young coyotes to get out and establish their own territory.

“Those young coyotes are in dispersal mode,” said Brown. “The adults will force them out. That accounts for a lot of sighting reports this time of year. The juveniles can be wandering around, getting the lay of the land.”

Brown explained that coyotes defend territories. When the young coyotes are forced out, they often end up in “no-coyote’s land,” so to speak. In other words, they can end up in our backyards and running down our streets.

The other possible (man made) factor is food availability. If the weather is really cold, coyotes have to look farther afield for food. Sometimes, they can find that food (aka a squirrel) hanging out under a bird feeder in someone’s backyard. Or maybe there’s a trash can without a tight-fitting lid. Or someone who puts animal products (bones, grease) in their outdoor compost pile. Occasionally, said Brown, a person might be feeding coyotes directly, thinking they are feeding stray cats. Don’t do it.

If you see a coyote in or near your yard, make sure there is nothing attracting them.

“Coyotes generally only become a nuisance in neighborhoods when there are unnatural food sources for them (uncovered garbage and compost, outdoor cat/dog food, etc.),” said Amy Mayer, an EG resident and URI wildlife specialist. “Keep the coyotes and your pets safe by making sure there is nothing left out that could encourage foraging.”

Mayer recommends this website HERE – it’s focused on Newport and Jamestown but there are great resources to learn more about coyotes, she said.