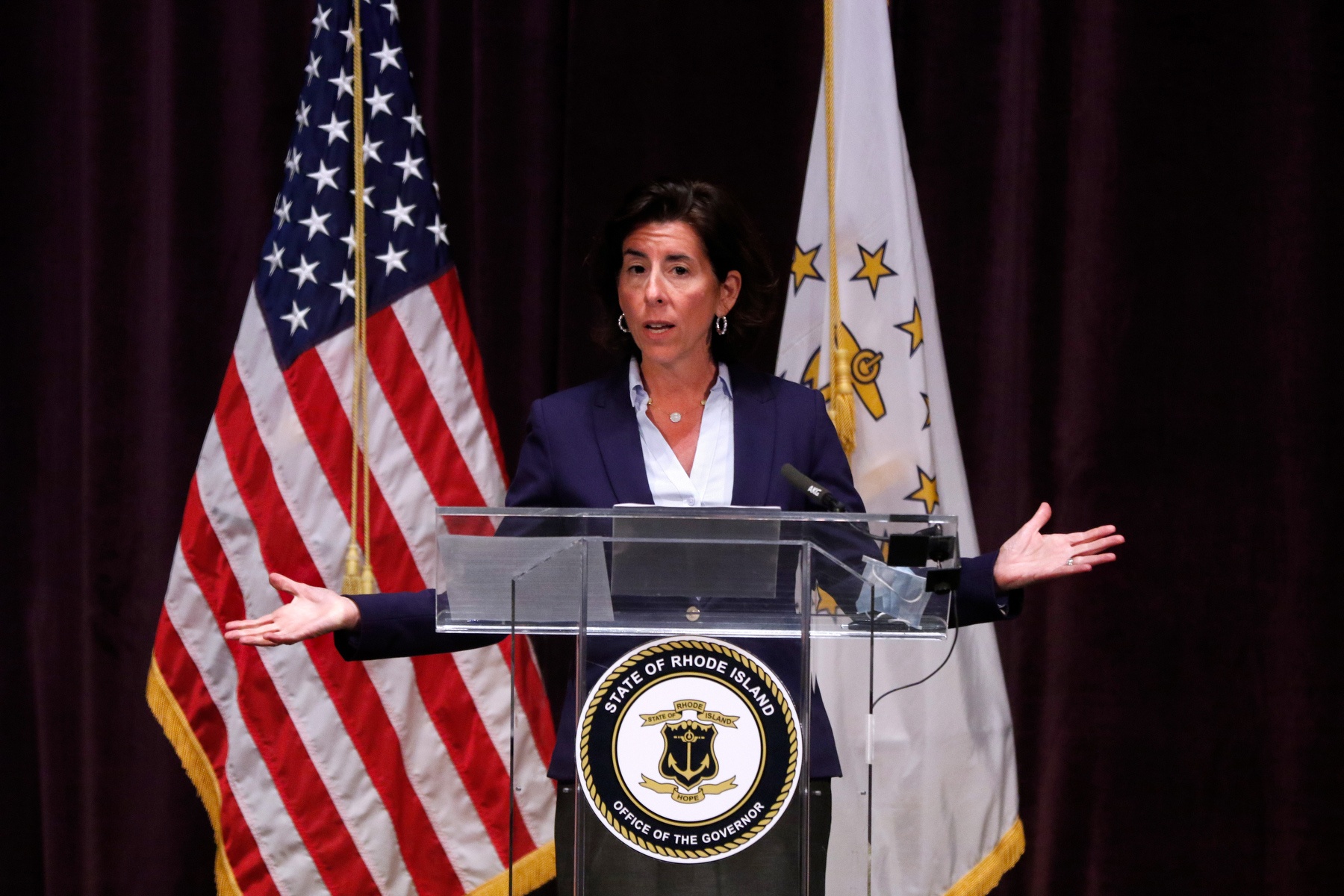 At Gov. Gina Raimondo’s press conference Monday afternoon, she confirmed Phase 3 will start tomorrow and presented updated guidelines for what it will look like, including tighter restrictions than originally planned for group gatherings. The revisions reflect the reality that while Rhode Island numbers continue to trend downward, much of the country beyond New England is experiencing a surge in COVID-19 cases.

“We want to enable commerce so people can get their jobs back but want to keep a lid on group gatherings,” Raimondo said.

At social gatherings – such as barbecues, parties, networking events – there’s now a limit of 25 people indoors and 50 people outdoors. Social gatherings with licensed catering – weddings, for instance – are an exception and can have up to 50 people indoors and 100 people outdoors. (Raimondo’s initial announcements on Phase 3 would have allowed 75 indoors and 150 outdoors.)  Since some people in the state may have planned for larger events based on her earlier comments, Raimondo asked them to contact the Department of Business Regulation at (401) 889-5550.

“We’d like to enable you to have your wedding the way you want it but we have to be really careful about the regulations, so we have to hear from you to help you have the wedding you planned and possibly let you go a bit higher than the 50 people indoors and 100 people outdoors,” she said.

For events open to the public – such as musical performances, festivals, religious services – up to 125 people can be allowed indoors and up to 250 people outdoors. A week ago, Raimondo said outdoor events could have an unlimited size. If an event will have over 100 people, Raimondo said she wants a plan to be submitted ahead of time that requires social distancing guidelines. She also told any places of worship that feel they can safely go over 125 to call DBR and figure out if it’s possible.

Still, she said, “you need to know smaller is better. Smaller is safer.”

For other places of public interaction – such as retail stores, restaurants, gyms, museums, office-based businesses, parks and beaches – indoor venues operating at a percent capacity can increase to 66 percent capacity with 6-foot spacing. Indoor venues operating at a square footage capacity can increase up to 1 person per 100 square feet with 6-foot spacing.

Seated venues can also open up to 66 percent capacity. Free-flowing venues can open at 100 square feet per person, as long as everyone stays 6 feet apart.

Businesses that are going to be coming online, including movie theaters, bowling alleys, arcades and indoor sports activities which have been closed will be able to reopen in Phase 3. For assistance to reopen, businesses can consult ReopeningRI.com or call the Dept. of Commerce at (401) 278-9100.

Raimondo updated guidelines around Fourth of July events as well, stating that none of them should go above 250 people outside. She told those planning events to submit a plan that shows precautions will be in place to require mask-wearing and social distancing.

“We want people to have a good Fourth of July but we don’t want an outbreak,” she said. “Someone said to me, ‘Are you worried about the Fourth of July?’ Absolutely, yes, I am worried.”

Raimondo also acknowledged that bars have been a hot spot all over the country and they will continue to follow the same guidelines in the state – bars that are able to provide seated service to groups at stable tables will continue to be allowed to be open. People will still not be allowed to mingle in close quarters or be served in front of a bar at these locations.

Raimondo announced a mandatory, 14-day quarantine goes into effect for anyone coming to Rhode Island from any state with a 5 percent or greater positivity rate. This currently applies to 23 states in America (none of them in the Northeast). The list of these states will be published on the Department of Health website and will continue to be updated. The exception to the mandatory quarantine would be if a traveler has a negative COVID-19 test in their home state within the past 72 hours and can attest to that.

“Summer is the season for travel in Rhode Island,” she said. “I want people to come here as long as they follow our rules. Come here and safely vacation. Get yourself tested.”

These rules will be enforced with signage and announcements around the state, including airports and train stations. Raimondo said the tourist industry will be closely worked with to help follow these rules. She urged tourists to have proof they know these requirements and will either quarantine or get tested.

Rhode Islanders who travel to one of these states and come back home will also have to follow the mandatory quarantine period or sign up to get tested at www.portal.ri.gov. If you test negative, you don’t have to quarantine.

Raimondo acknowledged it will be tough to enforce these travel rules but said they will do their best by promoting awareness through signage and reaching out to different places for help. She said cars with out-of-state plates will not be stopped and neither will people at rest stops.

The governor noted the four data points she’s used in determining if the state is ready for Phase 3:

Raimondo pointed out that only two states in the country continue to see a decline in cases and Rhode Island is one of them, alongside Connecticut. Meanwhile, nationwide, June 26 marked the highest number of confirmed cases on a single day.

“I want us to continue to lead the nation,” she said. “I don’t want setbacks.”

To that end, Raimondo issued a warning to Rhode Islanders in their 20s, urging them to follow social distancing guidelines. Cases among 20- to 30-year-olds were up to 60 and 70 percent since June 23.

“You guys aren’t following the rules,” she said. “We need you to do better. Chances are if you’re a young, healthy, active person who’s in their 20s, you won’t get very sick. But you know what you can do? You will spread that to an older person in your family who could wind up in the hospital or worse. You will contribute to an outbreak in your community.”

In welcome news, Dr. Alexander-Scott said the child diagnosed with multisystem inflammatory syndrome earlier this month was discharged from the hospital yesterday in great condition.