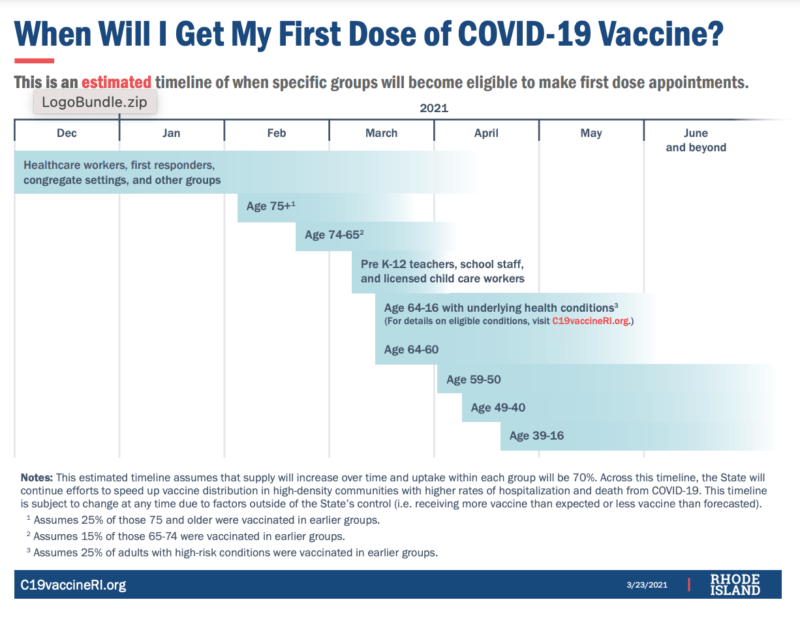 “Because we’re getting assurances from the federal government, we are confident we can open eligibility,” Alexander-Scott said. She acknowledged that opening up eligibility would not translate to immediate vaccination for those in the newly eligible categories.

Addressing the frustration many people have experienced when trying to schedule an appointment for vaccination, Tom McCarthy, executive director of RIDOH’s COVID response, said the state is establishing a preregistration process.

The plan is for notifications to begin the week of April 5. You can preregister at portal.ri.gov or by phone (844) 930-1779. Preregistration is not required, McCarthy emphasized, just another option. To start, the state will reserve 50 percent of appointments at statewide vaccination sites for those who have preregistered.

Gov. Daniel McKee announced two new state-run vaccination sites will open this weekend, with 400 appointments at each location – in South Kingstown and Woonsocket – to open up Friday.

A few business-related changes were also announced Thursday. Ten people can now dine together outdoors, up from 8. Self-serve seating is also going to be allowed. Another change: gyms and fitness centers can reopen showers. In reflection of additional information about how the virus spreads, cleaning of high-touch surfaces remains important but some of the paperwork businesses have been required to fill out will now be eliminated.

Alexander-Scott said the steadily increasing number of vaccinated residents means there are fewer people who are susceptible to the virus, yet the number of positive cases remains steady. Most likely, she said, this was because the U.K. virus variant was widespread in the state; she said perhaps as much as 40 percent of the cases were of the U.K. variant now.