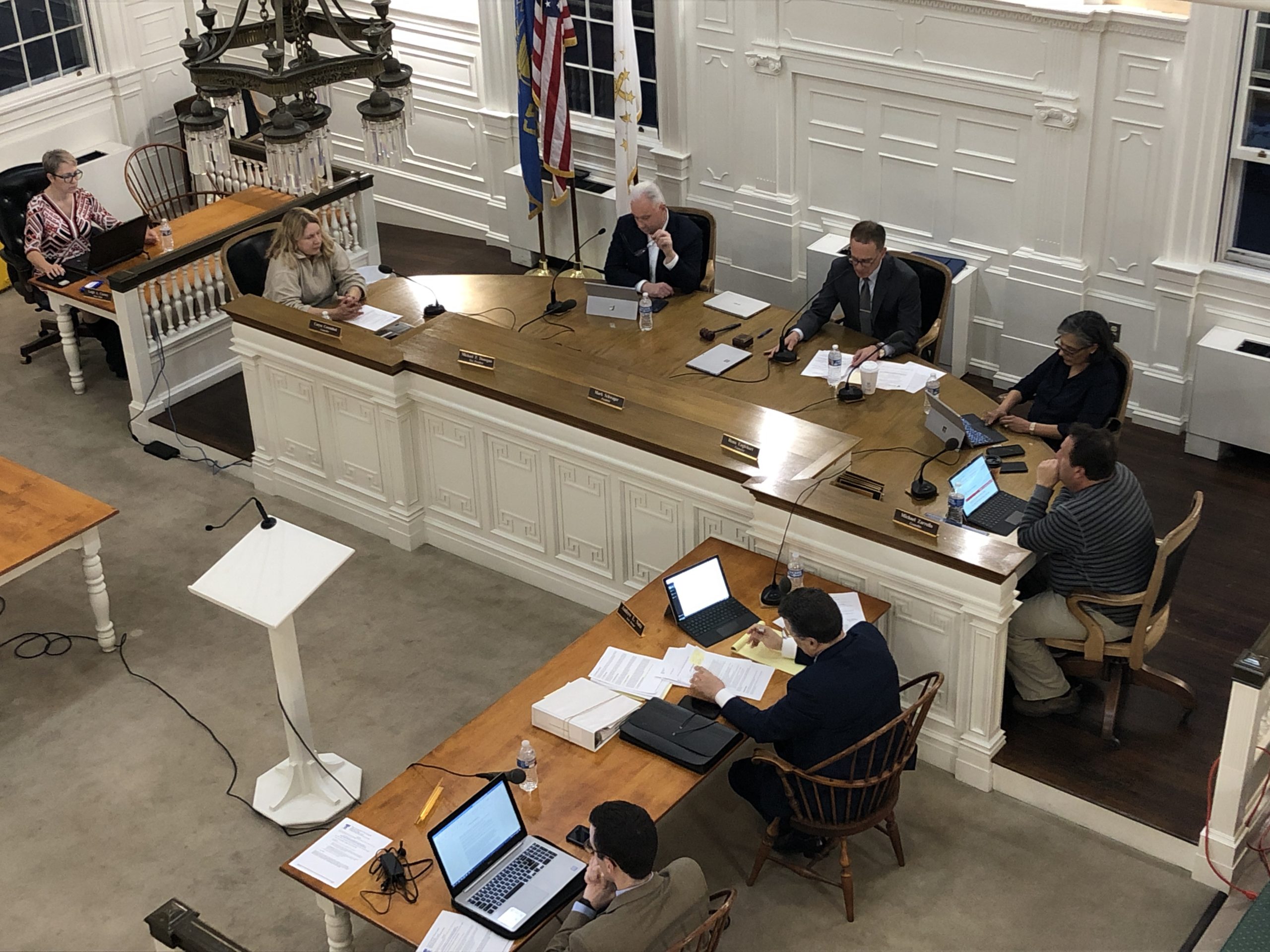 Above: The Town Council practices social distancing at its emergency meeting Monday night.

The Town Council voted 5-0 Monday night to give Town Manager Andrew Nota temporary emergency powers at a meeting at Town Hall where the only people in attendance were the five councilors and staff from both the town and the schools (and this reporter). The action, said Council President Mark Schwager, was “to remove barriers to action in response to COVID-19” in the event that it worsens, as has been seen in China, Italy and now New York.

“This step has not been taken lightly. We hope by taking these actions we can reduce the health risk to our community,” Schwager said.

As of Monday, according to Gov. Gina Raimondo, 21 people had tested positive for the novel coronavirus, with 149 tests pending and 2,300 known to be in self-quarantine (including the entire student body and staff of Cranston West High School). That places Rhode Island among the top six states in the country per capita. According to Dr. Nicole Alexander-Scott, head of the state Dept. of Health, Rhode Island has what’s referred to as “community spread,” where there are people with the virus whose transmission cannot be tracked to an individual source.

As a result, Raimondo ordered all restaurants to stop dine-in service starting Tuesday (3/17), permitting take-out and delivery services only. That hits restaurant-rich East Greenwich hard. Several local outlets are closed until the dine-in ban is lifted, but the majority of dining establishments are offering take-out and delivery service (find a list of all local venues HERE).

“We’re going to take a pause for a period of time,” said Nota about the restaurant closure Monday. “That’s probably the scariest thing … we don’t know when this will end.”

As of now, Town Hall is open for business, but Nota said he was working with staff in case more restrictions are put in place.

“We’re already looking at ways to streamline staffing,” he said. That said, DPW and Rec workers will be tackling their typical spring chores, such as street sweeping and field maintenance, as long as that is feasible.

“For the time being, we’re going to stay the course and provide the highest level of services,” said Nota.

But, he said, “we can’t do this alone … the community needs to be committed.”

In particular, Nota asked residents who might have an extra box or two of medical masks or gloves to drop them off at Swift Community Center to be used by the town’s first responders because supplies are tight.

“We know there’s a supply of lower-level gloves and masks in the community,” he said Monday night. “For anybody out there that has an extra box of gloves or masks, if they have enough and they have excess, we could use that extra supply.”

Meanwhile, the school district will be distributing free breakfasts and lunches to students 18 and younger starting Tuesday (3/17/20) from 11:30 a.m. to 12:30 p.m. at Frenchtown and Eldredge schools. Anyone picking up a meal must be accompanied by a student.

The town’s Senior Services program will be providing meals starting Wednesday. Contact Charlotte Markey at [email protected] to be added to that list. Meal pickups and deliveries will both be available.

Gov. Raimondo has limited gatherings to 25 or fewer, but that could drop to 10 people, as has been urged by national sources. One irony noted by Town Manager Nota is that this is the first March maybe ever where ball fields are in shape for play (not too soggy from snow and rain) but the town has had to shut down all public fields.

That said, Nota encouraged residents to get outdoors and said all EG parks would remain open, including playgrounds. He said parents should use discretion if they arrive at a playground – if it is crowded, don’t stop there.

The East Greenwich Police Department also issued some guidelines Monday, urging residents to call ahead if they need a VIN or background check. For VIN check appointments, call (401) 884-2244. For background checks and fingerprinting, call (401) 886-8629. In both instances, DO NOT come into the lobby – those calls are going to be handled by phone call only. The EGPD Community Room is closed until further notice. In addition, if you need to go to the police department for a court-ordered custody exchange, again DO NOT come into the lobby. There is a dedicated video surveillance camera above the front door that will capture the exchange.

For those who find themselves out of work because of this health emergency, WPRI has compiled information on how to apply for aid HERE.