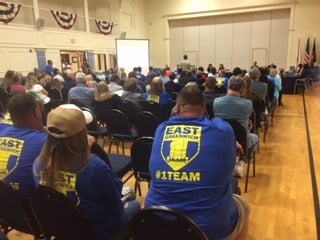 July 24, 2017 – In a procedural sleight of hand, the Town Council voted to remove the word “acting” from Acting Town Manager Gayle Corrigan’s title, making her simply the town manager of East Greenwich. The vote, 4-0, was taken after Town Solicitor David D’Agostino recommended the change, citing questions he’d received about the legitimacy of the “acting” designation. Councilman Sean Todd was absent.

“It certainly would put an end to any questions or challenges,” said D’Agostino.

“I think the concern of the community, and my concern – it’s very unclear – is this a temporary position of this individual or is this person appointed and going to remain in this position? Unless we have some kind of contractual agreement with Ms. Corrigan, that is going to be ambiguous,” said Councilman Mark Schwager after D’Agostino made his recommendation.

Council President Sue Cienki said she’d been talking to other town councils about their search processes, including North Kingstown and Smithfield. She said yes, a search would take place.

But then, for a moment, it seemed as if a vote would not take place. D’Agostino, trying to bolster the idea that the Town Council was not wed to Corrigan if it voted to remove “acting” from her title, read from the charter about the Town Council’s ability to hire or fire a town manager.

That prompted Deutsch to ask, “ So we have to do it with all five of us here? is that accurate?”

“It does say ‘the majority of all members of the Town Council,’” replied D’Agostino in apparent agreement.

“So we can’t do that tonight?” said Deutsch.

But D’Agostino voiced a change of heart.

“You have opened the meeting,” he said. “You have a quorum. So you can make the appointment this evening.”

There were loud no’s from the crowd. One person called out, “Listen to your constituents.”

But Cienki called for a vote.

All four councilors voted to approve the change.

Schwager clarified his vote after the meeting.

“I was surprised. It hadn’t come up before to change the designation. But it clarifies the situation for the residents. Now they know that Gayle Corrigan is the town manager,” he said. Before Corrigan was appointed in June, Schwager said he’d proposed they codify that it was a temporary position.

“You could have put it in a contract, she’s being hired in a temporary capacity to hold the position until a permanent town manager is appointed. That could have been put in a contract. There is no such wording. So let’s just call it what it is,” he said.

The Town Council was to meet in executive session after the regular session Monday night with one of the agenda items being discussion of an agreement with Corrigan. When the council was asked during public comment what Corrigan was being paid, Cienki said Corrigan had not been paid since July 1, when the contract with Providence Analytics expired. Corrigan is a principal with Providence Analytics, the firm hired in April to first review school department finances for up to $15,000. When the job was extended to include town finances, a fee of $150 an hour was agreed upon, according to Cienki. But that contract ended with the end of the fiscal year.

The discussion of Corrigan’s contract in executive session also drew the ire of one in the audience, David Caldwell, who argued that the Town Council could hold that session in public if it chose to.

“If you want to close it, [Corrigan] can demand it be open. But if you want to open it, you can open it,” he said.

“That is a correct reading,” replied Solicitor D’Agostino.

“That means it does not need to be in secret, correct?” said Caldwell.

Caldwell then asked Corrigan directly if she would agree to hold the discussion in public. She declined.

Resident Bill Higgins asked why the personnel manual had not been followed when Corrigan fired three town employees and hired a chief of staff and two others from the school department. The manual, he said, required posting the jobs first and allowing current employees to at least compete for the positions.

Resident Tracie Truesdell asked about the search and when it would start. Cienki said she wasn’t sure yet and that she’d prefer to wait until all five councilors were in attendance to hammer out those details.

“You appointed her town manager tonight,” replied Truesdell, in reference to the four councilors in attendance who had just voted to make Corrigan town manager, even though Vice President Sean Todd was absent.

The council also met with the School Committee to discuss consolidation efforts and a memorandum of agreement. Look for that story and others Tuesday (7/25/17).