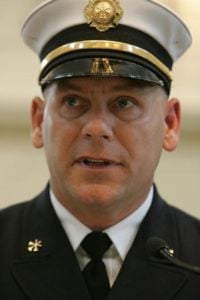 Peter Henrikson when he was fire chief of the EG Fire District. Credit: Providence Journal

The Town Council agenda for Monday includes a vote on Peter Henrikson as deputy chief for the fire department. Henrikson served as fire chief from 2010 to 2013, just before it went from a fire district to a town department. He accepted retirement after the merger.

The department has been without a deputy chief for the past year. Town Manager Gayle Corrigan decided to leave the post vacant as a cost-savings move. In April, she said she wanted to fill the position and announced she would be naming someone for the council to vote on at its May 14 meeting.

Henrikson’s wife, Kristen, just moved into an interim position as Corrigan’s assistant, taking her out of the fire department days before the announcement of her husband’s proposed return there.

Peter and Kristen Henrikson both served together in the fire district before Peter’s retirement in 2013. Peter Henrikson recently filed an ethics complaint against firefighter and union president Bill Perry, accusing him of nepotism. Perry’s brother, Jim, works for the fire department as well. That complaint is being investigated.

Peter Henrikson has been an unofficial advisor to Corrigan for the past several months, meeting with Corrigan as well as with the two interim fire chiefs who have served since Chief Russell McGillivray was let go in November. Kristen was offered her old job back as fire clerk last August, despite have received a $70,000+ settlement to leave that job the previous year.

Interim Fire Chief Robinson has a six-month contract that is up in July.

Also on the agenda Monday night is a budget hearing with the School Committee. The meeting takes place at Swift Community Center at 7 p.m.