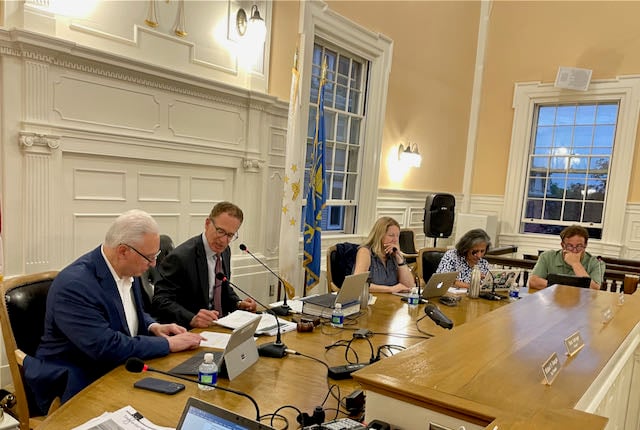 Above: Councilors Mike Donegan and Mark Schwager discuss budget numbers during their May 23 meeting.

The Town Council discussed the FY2023 budget last Monday night and one thing was clear: there appeared to be no appetite for giving the school district anything more than Town Manager Andy Nota has proposed. That means the district would have to figure out how to plug a $500,000 hole, since Nota’s budget gives the schools $38.7 million, an increase of $644,000 but not the $1.2 million increase the School Committee had sought.

Three councilors, Mike Donegan, Caryn Corenthal and Renu Englehart, made clear they thought the schools did not need such a large fund balance so the district could use $500,000 from its fund balance to balance its budget.

Nearly $800,000 of the district’s current $3.7 million fund balance is already spoken for ($365,000 in this year’s budget is coming from the fund balance and another $390,000 was recently allocated to pay half the cost of the high school’s artificial turf field replacement). Town finance director Trish Sunderland estimates the school district will end this fiscal year (June 30) with a $1 million surplus although the school district is not so optimistic.

For the past several years, the school district has carried a $2 million to $3 million fund balance, but as much as $2.1 million of that was restricted – until this year. That’s because that was money collected as part of the district’s health insurance plan but the district switched to the Interlocal Trust last year so that money is now just part of the unrestricted fund balance.

“It is a concern to me that they’re asking people to pay taxes so they can keep this money on their side. Part of this is to reach a happy median,” Englehart said. “I would like them to use their fund balance.”

“With all due respect, I don’t think they are not very accurate in their budgeting,” she said. “I don’t know why they need very much money at all because the town will cover it.”

The town holds the purse strings when it comes to how much the school district will get. Usually, the district gets at least a small budget increase from the town but that didn’t happen in FY2018, when the then-Town Council level-funded the district. While the current Town Council (elected in 2018, post level-fund) has voted to increase the district’s budget in the years since, for the School Committee there is a level of unease baked into the process.

Councilor Mike Donegan said it comes down to good fiscal policy and good government. “The town is the right place for a fund balance –where it can be used to pivot to wherever the need is.”

The town, meanwhile, has a generous 14 percent fund balance and Town Manager Andy Nota is looking to boost it to 17 percent. That won’t improve the town’s bond rating (which is near the top as it is) but Nota said it will give the town flexibility. Previous town councils have maintained a lower fund balance.

The School Committee, which met last Tuesday, discussed fund balance but Chair Anne Musella said it was not yet time to discuss how to resolve a possible budget shortfall, saying it made more sense to wait until the Town Council had acted.

A vote on the budget is not going to take place until next Monday or Tuesday. By town charter, the budget must be approved by June 10.