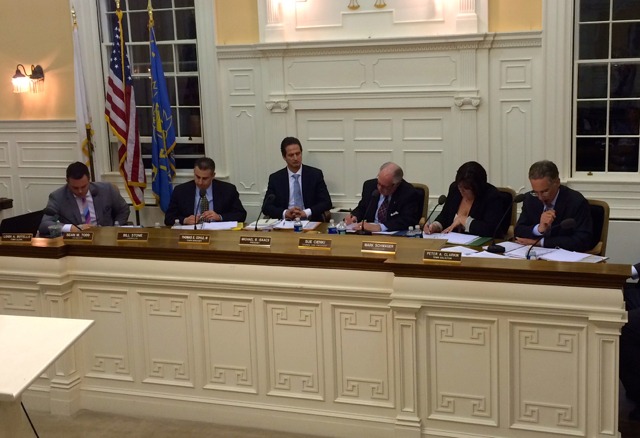 The Town Council voted 5-0 Monday night to approve a six-month moratorium on retail businesses that would allow the use of legal marijuana.

This was the council’s second look at a moratorium on marijuana-related activities. The council tabled the original moratorium at its meeting Feb. 23 after several councilors said the language was too broad. Town Solicitor Peter Clarkin presented a revised moratorium to the council Monday night, with some language deleted, but Councilor Mark Schwager again said he thought it went too far.

“I still find a lot of the aspects of this moratorium are too board. I still don’t understand what the urgent threat to health and the public is,” said Schwager, adding that hookah or vaping are not specifically tied to the consumption of marijuana.

Schwager also took issue with the inclusion of state-regulated “compassion centers” in the proposed moratorium. The state has allowed three compassion centers to open in the state (in Providence, Warwick and Portsmouth) – any additional centers would have to be approved by the General Assembly.

“I don’t know what protection is better than a state statute in place,” said Schwager. Besides, he said, the activities of compassion centers legal. “i’m not sure how you can exempt patients and their designated caregivers and not exempt compassion centers.”

“We had to have something before us to either vote on or modify,” said Council President Michael Isaacs. “The solicitor was asked to provide some framework…. As for the vaping and hookah lounges – I think we do need to look at that language, we don’t want to pick up more than intended. But we don’t want to be caught with something opening … “

“I share a lot of Dr. Schwager’s concerns,” said Councilman Bill Stone. “I think a blanket moratorium doesn’t work legally. The fact that we’re talking about hookah … as far as I know it has nothing to do with marijuana.”

Noting that hookahs have been around for hundreds of years in different parts of the world, Stone said the council could be accused of being culturally insensitive or ignorant about them.

It was Stone who offered the language confining the moratorium to retail businesses “where the consumption of marijuana is promoted or allowed,” noting that there seemed to be a concern that such an establishment could open on Main Street.

“I included the vamping centers because there’s one in Providence,” said Solicitor Clarkin. “That is exactly the type of activity we want to have rules on. Right now, I don’t think there’s anything on the books to keep one from opening right across the street.”

Councilman Sean Todd said he was concerned about the lack of regulations on Elevate, a medical marijuana vaping lounge in Providence, saying he would want to keep such an business off Main Street.

One of Elevate’s owners told the Providence Journal in an article Jan. 17, 2015, that he was required to get a retail license and a permit to operate on Sundays, but that was all.

On Tuesday, Todd elaborated on his comment: “I’ve got a young family and I don’t think it’s in the best interest of the community to be answering questions from kids about why people are getting high in a building.”

When asked how pot differed from alcohol, since many people drink expressly to feel a little “buzzed” when they drink, Todd responded, “One’s legal and one the federal government deems illegal.”

Marijuana has been legalized in some form in 23 states (including Rhode Island) and the District of Columbia, but it remains illegal on a federal level.

“I don’t believe in it. I don’t want my kids doing it,” Todd said of marijuana. “Keeping it up the street in Cranston or Warwick is fine. I just don’t think it’s right for our town.”

When asked why marijuana wasn’t right for EG, Todd said, “Because I live here.”

“I don’t think it’s a bad thing. It speaks to how many businesses want to come to our town,” Todd said.

Council President Michael Isaacs also elaborated on Tuesday, saying he wanted the town to study the issues “before we have places opening up that are established for the consumption of marijuana. Marijuana is not a legal project. Yes, it’s available for medical use. But we need to understand the ramifications: what we want to have for Main Street, what it would be like for other businesses, for people walking by,” he said. “With regard to alcohol consumption, there are regulations, bartenders have to be trained.”

Marijuana consumption, he said, “is a gray area that hasn’t been thought through.”

Isaacs said there was a difference between alcohol and marijuana and that the number of establishments that offer alcohol in East Greenwich was not too high.

“We don’t have a bunch of bars in East Greenwich,” he said. “There are bars but they are part of restaurants. When you’re talking about people and marijuana, it’s not dealing with a legal product.”

That, he said, is why the town needs to look at the issue: “We don’t have those kinds of things in place [like training for servers] relating to marijuana because it’s not currently a legal product.”

The Planning Board will take up the issue and offer its recommendations to the Town Council.