The Town Council announced Wednesday it has chosen Andrew Nota to serve as the new town manager. They will vote on his appointment in open session Tuesday, Aug. 6.

Nota currently serves as the town manager for Jamestown.

“He really had all of the things we were looking for when we set out to identify candidates” including municipal experience, managerial experience, local and state institutional knowledge and strategic planning experience, said Council President Mark Schwager.

Schwager said Nota will get a three-year contract, with a salary of $150,000, $10,000 less than Corrigan but around $27,000 more than he is making in Jamestown. The full contract will be available after Nota’s appointment next Tuesday. He is expected to start after Labor Day. 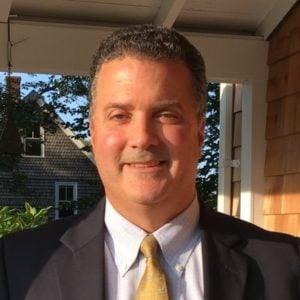 Nota has been town manager in Jamestown since 2014; before that, he was director of administrative services in South Kingstown from 2009 to 2014. He’s also served as director of parks and recreation for Narraganset. He has a bachelor’s degree in science and master’s in business from URI, as well as a law degree from New England School of Law. He lives in Jamestown.

Nota serves in leadership positions on the Rhode Island League of Cities and Towns, the state chapter of the International Cities/County Management Association, and the R.I. Interlocal Risk Management Trust. He’s also been involved in the Greater Newport and East Bay Development Corporation, the Governor’s Task Force of Rhode Island School Conditions Assessment, and the Southern Rhode Island Chamber of Commerce.

“I felt he would be a great community representative,” said Schwager.

Councilwoman Caryn Corenthal was also enthusiastic about the choice.

“His experience, education and temperament make him an excellent fit for our town,” she said. “I look forward to working with him.”

“He has an amazing amount of networking that he’s used to benefit Jamestown,” said Councilwoman Renu Englehart. “I would have liked to pick an East Greenwich candidate and we had several really good applicants from within the town but Mr. Nota was truly a stand out.”

While the town charter states town managers shall live in East Greenwich, state law makes residency requirements illegal. The last two town managers, Corrigan and Tom Coyle before her, did not live in town.