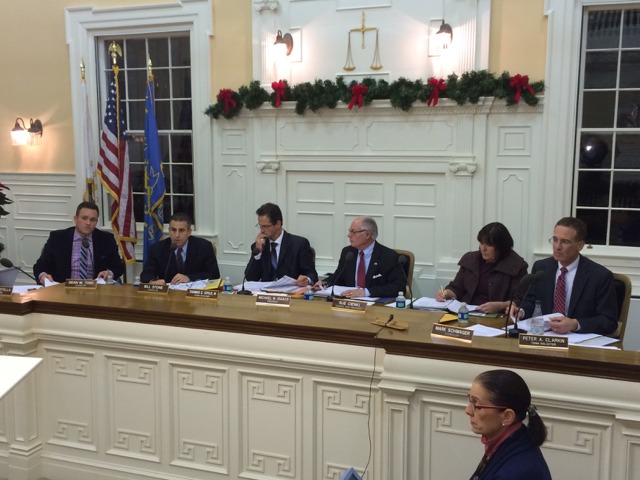 Four members of the Town Council Monday night agreed to sign a letter calling for a delay in the Dec. 11 vote by the State Planning Council on RhodeMap RI, citing the need for cities and towns to have more opportunity to review the economic development plan.

“I’m not proposing that we take a position on the merits,” said Council President Michael Isaacs, who drafted the letter.

But, he said, “I think the concerns, particularly for municipalities, have to do with understanding the interplay of existing state mandates and the Department of Housing and Urban Development that come into play under this plan … [and] the issues regarding municipal zoning and planning authority that needs to be understood better.”

RhodeMap RI came about after the state invested in 38 Studios and the video game company went belly up. The General Assembly passed a law calling for the creation of an economic development plan and the state Planning Council got a $2 million grant from the federal Dept. of Housing and Urban Development (HUD) to draft such a plan.

Under the legislation, the plan was to be submitted for approval by October 2014, two months ago. One vote on the plan has already been delayed, following a letter signed by five state legislators – including Rep. Anthony Giarrusso and Senator-elect Mark Gee – decrying the plan. The conservative Center for Freedom and Prosperity has spearheaded the effort to discredit RhodeMap, citing fears of HUD-funded low-income housing projects. There are no such projects attached to RhodeMap, although the plan does call for better access to basic needs (food, housing, health).

A second vote is scheduled for Thursday, Dec. 11.

Isaacs, on Monday, raised the specter of a loss of local control, citing two projects in East Greenwich as cautionary examples. The first was Wellington Woods, a 450-unit development proposed in 2004 for the land now occupied by New England Tech. Some of the units would be designated “affordable housing” units, thus potentially allowing the development to exceed local density regulations. Wellington Woods never came to be. Instead, the former Brooks Pharmacy Corp. bought the property and built a headquarters building there. The building became the main campus center for NEIT after Brooks was bought by Rite Aid and New England Tech bought it.

The second development mentioned by Isaacs was the 10-unit East Greenwich Housing Authority development now being built on South County Trail south of Chef-a-Roni. He said questions about increased traffic and density would have been better addressed had the plan been vetted through the town regulatory process. EGHA, as a separate municipal authority, is not subject to East Greenwich regulations. The plans were, however, submitted to the town’s Technical Review Committee, at the request of the EG Planning Department.

On Tuesday, EGHA Director Marcia Sullivan said she wasn’t aware the Housing Authority development would be mentioned at the council meeting.

“We would welcome, and I don’t think it would be a problem, to have a conversation with the Town Council about their concerns,” she said. Fencing had been added at the back of the property at the request of one homeowner, she said, and she had not gotten any complaints about the project recently.

On Monday, in addition to Isaacs, councilors Sue Cienki, Sean Todd, and Bill Stone all said they would sign the letter. Councilman Mark Schwager was the lone member who said he would not sign the letter.

Cienki said the more she read of the report, the more questions she had. In particular, she said, “I’d like a cost-benefit analysis of what the plan includes and I’d like to know how the federal mandates are going to supersede our state mandates which will ultimately supersede the local mandates.”

Todd said he, too, had questions, and he noted that the plan included the phrase, “social equity.”

On Tuesday, Todd elaborated, “I certainly believe in equality for all people of different races, backgrounds, and economic situations, but I believe the way this document addresses the issue will generally give more authority to ‘bigger government’ at the expense of ‘local governments,’ which I oppose.”

After Monday’s meeting, Stone said while the plan contained a lot of positive things, “I think there’s a lot of public confusion about what it means and what its effect is. If you’re going to start setting an economic prescription for the state, people should generally understand what that’s all about.”

Stone said he didn’t think the plan would constrain economic development authorities, but noted, “It certainly is written that way. It doesn’t say, ‘We recommend,’ it says, ‘It is state policy that these things will take place.’” And some of the recommendations are pretty specific around say development projects having to have elements where local people are hired. Does that have the force of law? I think that’s part of what the concern is about.”

Schwager, alternatively, said, “The process has generated a tremendous of heat and I don’t see continuing the process to generate any more light.”

As for municipalities needing more time, Schwager was unconvinced.

“I think we have adequate representation to look at this plan through the Rhode Island League of Cities and Towns. We have three members of the Rhode Island State Planning Council that’s going to vote on RhodeMapRI from the League…. We have a lot of people looking out for our interests.”

Beyond that, he said, “It’s a plan, only a plan. It’s an array of options … it is not a mandate, it is not legislative.”

He applauded the fact the Planning Council got outside money (the federal HUD grant) to pay for the plan, which had to be done after the General Assembly pass the law calling for such a plan. And he said the fears of HUD control over the process would be no more likely than when towns like East Greenwich accepted HUD grants for such things as athletic fields and the senior center.

Later in the meeting, during public comment, resident Pam Gencarella spoke out against RhodeMap RI, praising the council’s decision to send a letter seeking a vote delay.

“The critical part is, the 180 pages of RhodeMap, while that’s a guideline, what you don’t see is the eventuality of what the HUD money leads to,” Gencarella said. She also referred to the need for a cost-benefit analysis.

On Tuesday, Town Planner Lisa Bourbonnais said cost-benefit analyses are not typically done for plans – they are done for projects that could grow out of a given plan. And, she said, RhodeMap RI was a plan.

“RhodeMap is not a law or a regulation. It’s a plan, it establishes a vision and some policy.”

You can read the whole plan here or an executive summary here. These are the six goals of the RhodeMap RI economic development plan:

Goal One: Provide educational and training opportunities to activate a 21st century workforce.

Goal Six: Make Rhode Island a state where our companies, our workers, and the state as a whole can develop a competitive advantage.