The 10 people vying for one of the 5 seats on the Town Council met in the auditorium at East Greenwich High School Monday night and it was clear from the outset that they fell into two camps: the recent changes may have been tough but the town is on the right track or, town officials have been reckless and secretive, creating problems, not solving them.

About 150 people turned out for the forum, presented by East Greenwich News and the EG Chamber of Commerce and sponsored by the EG Rotary Club The event was moderated by EG resident and Rhode Island Public Radio’s Chuck Hinman, who asked questions drawn from those submitted by residents and chosen at random.

The first question – what can be done to heal the town’s “big divide”? – jumped right into the issues that have unsettled the town since the swift passage of the fiscal year 2018 budget and subsequent departure of Town Manager Tom Coyle in June 2017.

Town Councilman Mark Schwager said the town needed to bring the public back into the governing process and improve relationships with the School Committee, town employees and residents.

“But East Greenwich needs a team to do this, so we need new leadership and a new team,” said Schwager, the lone Democrat on the current council and typically the only dissenting voice. 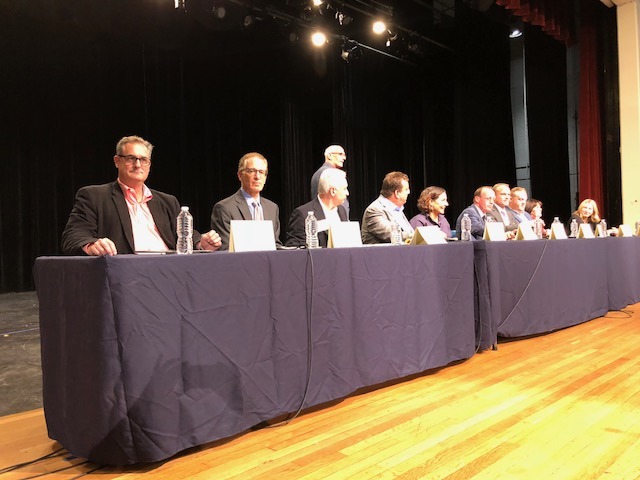 Councilman Andy Deutsch, a Republican, said talk of disharmony was itself the problem, noting that he had such a great relationship with one of the School Committee members, he lent his sound system to him for a party.

“It’s nice to have a good personal relationship with members of the School Committee and I think that’s important. But the thing that’s really important are your votes. Your votes are what determine your relationship with the schools, not your social camaraderie. And you voted to level fund our schools and that damaged our schools. We had problems providing services due to that vote.”

Republican Chad Callanan said he could build bridges and said he didn’t care who was on the council – ”I’m going to work with them.”

Sean O’Leary pointed out that he was running together with Andy Deutsch, even though he’s an independent and Andy’s a Republican.

“That is a signal towards the harmony that even though we’re not of the same party, we expect to work together,” O’Leary said.

Schwager said the town’s strategy with the firefighters was “flawed.”

“The current negotiating team will not reach an agreement with the fire department. They are at loggerheads,” he said. “We need a new team … to sit down with our fire department.”

Democrat Renu Englehart noted that the town walked away from a deal struck with the firefighters in December that would have reduced overtime by cutting the platoon size down from nine to eight, using that ninth firefighter as a floater, as had been the case before this contract. And, she said, the town finance department has not produced a budget report since April.

“How can we know what the numbers are?” she said.

“Our town is all fire, all the time. But the firefighters are just one component of our $62 million budget and one part of our municipal government,” said Democrat Caryn Corenthal. “Let’s have a good faith negotiation with, yes, respect and compromise. Hire a competent lawyer to negotiate. I have confidence that we can negotiate without maligning town employees, yet looking out for the taxpayers.”

Callanan said the purpose of unions were to serve their members: “They don’t have your interests at heart.”

He added, “You have to be prepared to bargain from a position of strength and also to walk away when required. And they have to believe that you will do that and I will do that. You also have to have a plan in the event you’re not going to come to an agreement. We’re going to get a good deal next time or there won’t be a deal.”

Independent Bill Higgins said everything needed to be looked at, including what the town has been paying the acting fire chief.

“Right now, we’re paying the equivalent of $135,000 a year to a fire chief who’s working four days a week and we’re paying his lodging because he lives out of state,” said Higgins. Acting Chief Kevin Robinson lives in Massachusetts.

Council President Sue Cienki said while she and Mark Schwager signed the last firefighter contract, they were acting in a policy capacity and had relied on town employees.

“The people that negotiated that contract were our town manager, our then-solicitor, our fire chief and our finance director. All of those people are no longer here. That is leadership,” she said.

On the question on whether or not the Town Council should use the town’s rainy day fund to keep taxes from going up, Deutsch said he supported when the Town Council did that in passing the current budget (the council approved using $1 million from the town’s fund balance to hold taxes steady). He said it was a strategy ahead of negotiations with the unions next year – less money in the budget, less money for the unions.

“Taking that money puts us into a better position for negotiating position,” he said. Cienki affirmed that stance.

“When you talk about going in and raiding the rainy day fund, it’s a strategy. It’s a strategy. We are not going to lower our bond rating here,” she said.

Democrat Mike Zarrella said the council should not be using the fund balance to balance the budget now, in a time of relative prosperity.

Everyone weighed in on the question of whether or not if elected they would keep Town Manager Gayle Corrigan. Schwager, Donegan, Zarrella, Englehart, Higgins and Corenthal said they would not. Callanan, Deutsch, O’Leary and Cienki said they would. Here’s a video clip from that portion of the forum:

You can watch the Facebook livestream of the entire forum here. A higher quality video will be available in coming days.