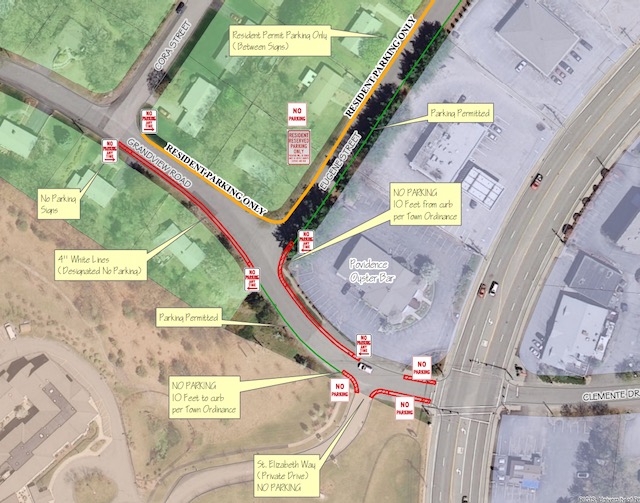 Above: The new parking plan for Grand View and Eugene streets.

It took several months for the residents of Grand View and Eugene streets and several years for the residents of Sleepy Hollow and Valley roads, but they now have new parking rules they like for their neighborhoods to help with the onslaught of patrons to nearby restaurants. On Monday night (1/10/23), the Town Council closed the public hearing on parking changes for Grandview and Eugene as well as Sleepy Hollow and Valley roads, with a vote on the new rules anticipated at the council’s next meeting, Jan. 23.

The issue for the Grand View neighborhood arose when Providence Oyster Bar opened last spring in a building previously home to the gift shop Sweet Twist. It turns out, there were lots more people – and cars – visiting the restaurant than had been the case for the gift shop. And many patrons opted to avoid the restaurant’s valet and parking lot, parking on nearby streets instead.

For residents, the change was sudden and unpleasant and they reached out to town officials for help. But crafting parking ordinances is not quite as simple as it may first appear and, because new ordinances require three readings, even if readings happen in quick succession, that would still take at least a month.

In this case, the situation on Grand View prompted the town to consider changes to parking on Sleepy Hollow too. Issues there had been on a slow burn for years, with patrons, workers and delivery trucks using Sleepy Hollow if they needed to get to Supreme Pizza or Natale’s on South County Trail, creating dangerous driving conditions.

On Sleepy Hollow (see below), there will be no parking allowed on either side of the street from South County Trail to Valley Road and around both corners at the Valley–Sleepy Hollow intersection.

At a public hearing on the changes Nov. 28, six residents from the Grand View neighborhood were present and all raised their hands in agreement that they were satisfied with the plan. The public hearing was held open until this past Monday to finalize details like parking sign placement.

“I’m happy that they listened to us,” said Grand View resident Anne Giuliano after the November meeting. “We stuck our noses in it. You have to do what you have to do.” 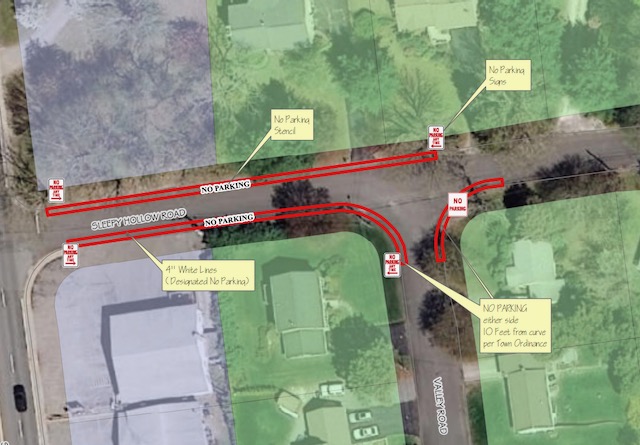