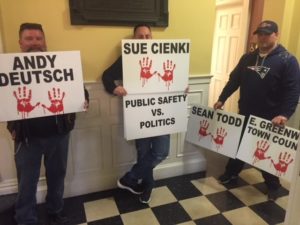 The rationale behind the reorganization is to lower fire department expenses. Under the plan, Town Manager Gayle Corrigan proposed laying off 6 of the town’s 36 firefighters and adding two “floaters” to each of the three remaining platoons to decrease overtime.

(Click here to learn more about how the three-platoon system works in North Kingstown.)

No changes, however, will be made to the current fire department structure pending Superior Court Judge Susan McGuirl’s ruling on a lawsuit filed by the town in December seeking permission to take such an action in the middle of a valid contract. The firefighters contract with the town does not expire until June 30, 2019. A hearing on the issue is set for May 14.

According to Town Solicitor David D’Agostino, the vote was needed to shore up the town’s argument that it already has the management right to take such actions. But, he said, that does not mean the town will automatically switch to a three-platoon system if the judge rules in its favor.

“The implementation of the plan is contingent on more than just a favorable decision by the court,” said D’Agostino. “For example … the number of firefighters out on IOD [injured on duty] status could prevent the implementation of the reorganization because of manpower considerations. Another consideration is that the timing of any reorganization would best coincide with the close of a payroll week, so that the Town would begin … at the start of a new pay period.”

D’Agostino said an additional vote on timing of the shift structure change would be necessary.

In her comments on why she planned to vote in favor of the EGFD restructuring, President Cienki spoke about the need for the town to “start thinking differently” regarding the town’s financial situation.

“We need to have options … for how we’re going to handle our responsibilities,” she said. “This gives us an option of how we can control costs.”

Councilman Schwager said he couldn’t support the plan because it would only further damage relations between the town and the firefighters.

“This is not a recipe for reaching a negotiated agreement with our town employees. And we will have to reach a negotiated agreement unless we want to be in court for months or even years,” he said. “The challenges we face as a town requires both the firefighters and the town find a reasonable solution together. The council’s current strategy has closed the door on the necessary conversation with the firefighters.”

After the meeting, Cienki said the town was willing to negotiate with the firefighters.

“Any time they want to sit down, the town is ready,” she said. 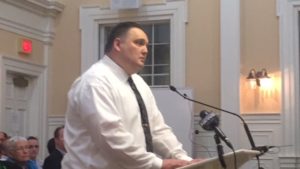 “We are always willing to negotiate and all the town has to do is contact me and request a meeting,” Perry said. “This town manager and Town Council have never reached out to us to negotiate.”

In December, the union agreed to cut the number of firefighters per platoon from nine (an increase they got in the current contract) to eight, enabling the town to restore one floater per shift with the potential to save in overtime costs. Council President Cienki said Monday negotiations broke down because the town wanted to talk about benefits, not just staffing issues.