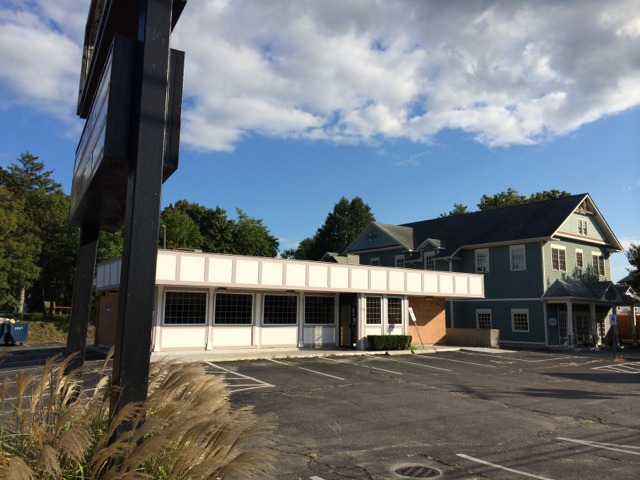 The Town Council approved a beverage and victualling license for the proposed Churchill Cigar Bar at its meeting Monday night, 5-0. The new license brings the number of B-V licenses to 36.

Churchill Cigar Bar is set to go into the space formerly occupied by Scrambler’s restaurant at 564 Main Street. Owner John Kent said the bar would serve food, but did not elaborate on specifics.

Although the vote was unanimous, the application did prompt some discussion about the town’s liquor license cap, which the council first voted to increase before granting the new license.

In particular, Town Council candidate Ed Field spoke out against the continued increase in the cap. In recent months, the council has approved new liquor licenses for Regency Cigar, Cobblestones Pizza, an Asian restaurant under construction next door to Cobblestones on Post Road, and Dante’s Kitchen. In each instance, the council first voted to increase the cap, then voted on the license application itself. (Resident and former Town Councilman Carl Hoyer also addressed the issue in this letter to the editor.)

“Somewhere along the line somebody needs to say how many are going to make sense for the town,” said Field in an interview Tuesday. He also said he thought use the word “cap” was misleading.

“There’s a misunderstanding about what the cap is and why we have one,” said Town Council President Michael Isaacs in an interview Tuesday. “The cap is part of the town’s enforcement mechanism and regulatory structure. … We have an licensing structure that provides for consideration of each license on it’s own merits.”

Isaacs noted that new restaurants add to the tax base and add to the 1 percent meal tax the town recoups.

Every license comes up for renewal yearly.

“Based on what I saw in Providence, I didn’t see anything objectionable to what they’re going to do in East Greenwich,” said Gee on Tuesday. “It was nicely decorated, it was respectable.”

Gee said he was not bothered by the number of liquor licenses the town has granted in recent years, based on the types of establishments involved.

“That doesn’t concern me, if it’s a nice, respectable, well-run business.”

He also addressed the concern voiced by some that East Greenwich didn’t “need” another cigar store. In addition to Regency Cigar, there’s the Humidor Smoke Shop in the Benny’s Plaza.

“If there are that many cigar smokers … then more power to them,” Gee said.