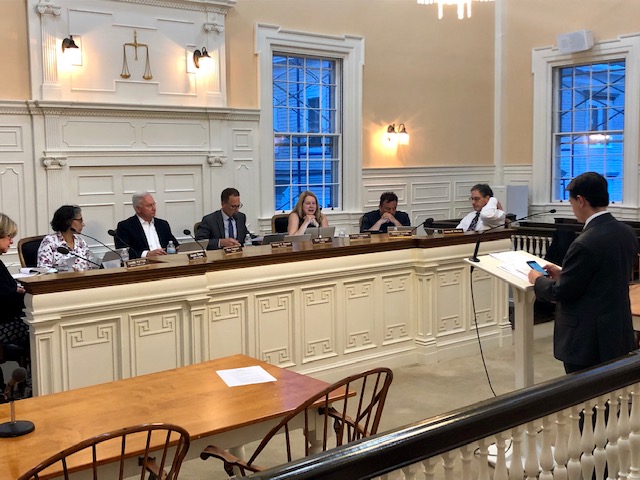 One by one, consultant Mike D’Amico took the Town Council through the language changes and financial implications of the four remaining municipal union contracts up for ratification. And, one by one, the Town Council voted to approve the contracts, after being assured that each of them complied with the Supreme Court’s 2018 Janus ruling allowing non-union employees to avoid paying union dues.

The council approved the firefighters 2019-2022 contract in late April, gleaning savings with a return to 8-man minimums per shift, with one floater, from the 9-man minimum and no floater contract that was approved in 2016. That contract also set the standard for a number of issues in all five municipal contracts.

Additionally, as in the firefighters contract, once a retiree becomes Medicare eligible, the town will only provide gap coverage, with the town’s payment toward the premium capped at $250 a month. And the unions agreed to a change in retiree benefits for new employees. According to the town’s actuary, for police that will lead to reductions in the OPEB liability of $2.6 million in 2020, increasing to $5.4 million by 2028. (OPEB stands for “other post-employment benefits … i.e. health care.) For municipal employees, the liability would drop by $746,000 and $1.3 million respectively. For DPW workers, the numbers are $686,000 and $1.3 million. The handful of members in the non-police union made calculating the exact OPEB savings impossible, D’Amico said.

“We went through these really fast tonight,” said D’Amico after votes on the four contracts. “It’s not common to get all five unions to agree a zero percent increase in the first year. And even the 2 and 2 [percent increases in years 2 and 3] … the average raise across the state was more than that. I don’t want that to get lost in the shuffle. That is not routine,” said D’Amico, crediting the unions.

“The changes we made in these contracts mean the OPEB liabilities will be less than they are today,” D’Amico added. “The long-range savings to the town are huge.”

(This was D’Amico’s last Town Council meeting as a consultant to the town. His contract is up the end of June.)

“The unions really met us everywhere we needed them to,” said Councilman Mike Donegan. “All you have to do is read the newspapers to really appreciate how the bargaining side and the labor side came together.”

Find Council President Mark Schwager’s comments about the process below: