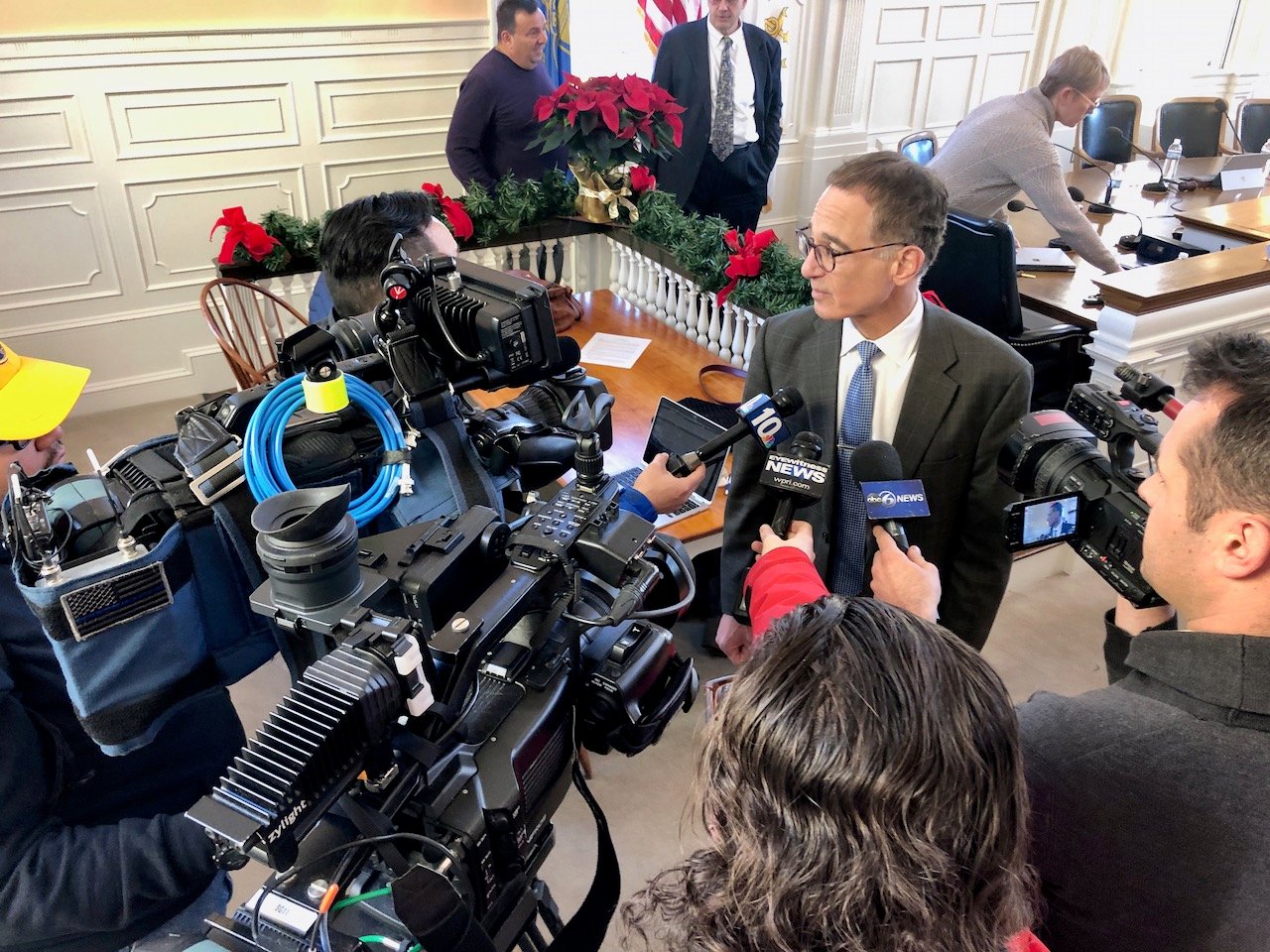 The council first met in executive session to discuss both actions, as well as the appointment of fire Capt. Thomas Mears to serve as acting fire chief. They then resumed the meeting in open session and made a succession of 5-0 votes, starting with Corrigan, who they dismissed “without cause,” granting her 6 months severance ($80,000) and health benefits as per her contract. (Read about what led to Corrigan’s ouster here.) 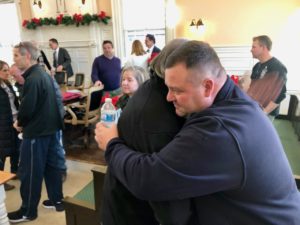 Acting Fire Chief Mears, right, receives a hug from George Anderson, who served as deputy fire chief in 1988, when Mears (age 16) started at EGFD as a volunteer.

They then voted in Duarte. Neither Corrigan nor Duarte were present at the unusual Saturday morning meeting. The council also voted to accept the resignations of acting Fire Chief Kevin Robinson and Deputy Fire Chief Peter Henrikson and appointed Mears to be acting fire chief.

“Our feeling was the best way to move forward was to have Ms. Corrigan leave without cause and we begin our recruitment for a new manager,” said Town Council President Mark Schwager after the meeting. “Our platform was open and effective town government, excellence in education and strong sense of community. We want to bring in someone we can work well with to put our policies in place.”

Schwager said he had talked with all five department heads considered for the job of acting town manager. “Every one of them said, ‘Whatever it takes to help the town,’” he said.

Corrigan, Duarte, Mears, Henrikson and town department heads Wendy Schmidle (IT), Leigh Carney (town clerk), Steve Brown (police), and Lisa Bourbonnais (planning) had been notified about the meeting. All waived their right to have discussion of their job performance in open session. Because of that, according to Town Solicitor Andy Teitz, no public comment was allowed about those personnel decisions.

Schwager said as director of public works, Duarte works with every other department in town and his department is also the largest in the town. Duarte also has served as acting town manager in the past when the town manager was away for a week or two (although not under Corrigan, who had Schmidle fill in during her absences).

The council also voted to issue a job posting for a consultant to work with the acting town manager, particularly with regard to finance and budget issues. The town and school department are without a finance director following the resignation of Linda Dykeman from that role Nov. 9. The deadline for resumes is Dec. 14 and Council President Mark Schwager said after the meeting he hoped to have someone in place before the end of the month.

Whoever is hired to serve as consultant will not be eligible to apply for the permanent town manager position (RFQ for Operations Consultant). Schwager said he envisioned the consultant job would last two to four months. Among the first orders of business will be to get the fiscal year 2018 year end report, as well as an update on the current year. Planning for the 2020 budget must be factored in as well, said Schwager. He said he would be talking this coming week with the town’s independent auditor, Baxter, Dansereau, on their review of FY2018. Corrigan and former Town Council President Sue Cienki had been withholding that information, saying the audit needed to be fully complete before any update was released. Fiscal year 2018 ended June 30. After the election, however, Corrigan said the town had a $2 million deficit; Cienki said EG was bankrupt.

The Town Council’s next meetings are Wednesday, Dec. 5, and Monday, Dec. 10.

East Greenwich News exists as a community resource. It will be better and stronger with your support. Click on the button or link below to keep local journalism alive and strong. Thanks!