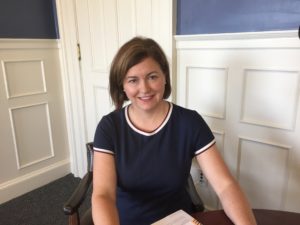 Town Manager Gayle Corrigan in her office at Town Hall.

In the three and a half months since “East Greenwich” and “Gayle Corrigan” were first uttered in the same sentence, a lot of has changed in that relationship.

Corrigan and her colleague Linda Dykeman were hired under the consulting firm name of Providence Analytics by the Town Council in April to review the School Department’s finances. Then, in May, the Town Council decided to let Providence Analytics review the town’s books. The results, presented at a Town Council meeting June 5, offered no startling fiscal revelations, but they did start a snowball effect that saw the Town Council passing (4-1) a budget three days later amid rumors that Town Manager Tom Coyle was on his way out. One week after the budget was passed, Coyle was indeed out – “separated” from the town in an agreement that included a six-month severance package. The new town manager? Gayle Corrigan. Ten days later, town finance director Kristen Benoit was fired and Corrigan’s consulting partner Linda Dykeman was hired to that position.

Town Council President Sue Cienki has said a search for a permanent town manager will take place but has offered no timeline.

For her part, Corrigan said she is too busy to even consider that position.

“Right now I’m just focused on streamlining operations here and the things that need to happen,” she said in a recent interview. “They haven’t come out with a posting yet. When they do, I’ll make my decision then. Right now, I don’t really have the time to think about that.”

Corrigan acknowledged East Greenwich’s finances are in good shape – “East Greenwich is not like Central Falls,” – but said she brings expertise in finance to the job.

“If you look back at some of the contracts, the fire contract, some of the things that were in that contract. They existed but they hadn’t really been analyzed,” she said. “Someone has to have a background, has to understand financially what’s happening.”

Corrigan said she was not worried about the appearance of both she and Dykeman getting top municipal jobs after being hired as consultants.

“In terms of being consultants, we’re both CPAs. I have an MBA. It’s a common practice,” she said.

Corrigan and her husband, who is Russian, live in Cowesett with their two children. They met and married while she was working in Russia and they moved to the U.S. in 2003. Corrigan grew up in Cranston and is a graduate of Cranston East but decided on Cowesett after her parents moved to the area. After 14 years as a close neighbor, she said she’s very familiar with East Greenwich and does a lot of her shopping here. Rasa, on Main Street, is a favorite restaurant, she said.

Corrigan, who earned an MBA from Boston University and eventually became a CPA, went to work for Senesco Marine, in Quonset, from 2004 to 2010. According to a document from the Rhode Island Commission on Human Rights published by Parker Gavigan at NBC 10 in 2012, Corrigan was fired from her job at Senesco for “violating her fiduciary duties.” The document alleges Corrigan, while an officer of Senesco, ran a staff leasing company that provided contract labor to the company, at a profit to her and without Senesco’s knowledge. (Corrigan did not respond to a request for a comment about past or ongoing litigation.)

Corrigan met East Greenwich resident and former R.I. Supreme Court Judge Bob Flanders, during her tenure at Senesco. After Flanders was named receiver of the financially troubled Central Falls, he hired Corrigan to serve as his chief of staff. She spent nearly two years there, during which time Central Falls’ went into bankruptcy, union contracts were renegotiated, pensions were cut and the city emerged from bankruptcy. Corrigan went on to serve as deputy director at Rhode Island Housing. That job came in two parts: Corrigan was hired in May 2013, then fired in December 2013; she sued for wrongful termination, then got rehired in May 2014 in return for dropping her suit. She left RI Housing a year later and opened a consulting practice. Among her clients, most famously, has been Central Coventry Fire District, where she remains district manager/acting clerk.

Corrigan said she’s at the “tail end” of her work for CCFD.

Corrigan said her responsibilities at CCFD will not interfere with her work for East Greenwich, that she will “absolutely” be able to give as much time as needed to East Greenwich. In addition, she said, she has no outside consulting jobs now and “I’m not looking for new clients.”

Corrigan said she doesn’t view running the Town of East Greenwich as if it were a business but that there are things to be learned from business.

“It’s very different from business. There are a lot of barriers to it. You’re not going to take over the City of Warwick,” she said with a laugh. “You’re not expanding. You’re limited. There are a lot of laws. There’s a lot of regulations. There’s contracts. There’s CBAs [collective bargaining agreements]. In a business, you can just say, let’s forget that pension and go out of business. We can’t do that. What I try to do is put in some good accounting best practices.”

But Corrigan said those pension costs, for instance, can “crowd out” other things a municipality would like to spend money on, like infrastructure, so it was important to do what she could to keep costs down.

Corrigan defended the manner in which she laid off* three town employees June 30, pushing back in particular on former Finance Director Kristin Benoit’s claim she learned she was fired via an email from the town about the restructuring.

“We did contact her and she didn’t answer her phone,” Corrigan said. “There were some intervening circumstances that she knew and that’s why she wasn’t answering the phone. She can have her story. We have ours.”

She disputed that things could have been handled better – for instance, by allowing employees a chance to apply for consolidated or new positions.

“It was a very tough 10 days,” she said of her first days on the job. “It’s tough when you start any new job, especially coming after a very well-like town manager. I’m going to say, we handled things the best we could. I don’t think I could have handled them any better, given the circumstances.”

When asked about negative responses by residents to some of her actions, she said it was hard.

“It’s never fun to be personally attacked. I understand their frustrations, but I also understand whenever you’re having discussions about looking at things a different way, for instance, in terms of how we evaluate department heads, there’s always going to be dissension,” she said. “I feel it’s a healthy part of the process.”

For his part, Town Council Vice President Sean Todd said he was happy with the job Corrigan was doing and not concerned with her lawsuits against past employers or affiliations.

“We asked her and she certainly has her own side to these stories,” Todd said about Corrigan’s suits against Senesco, Rhode Island Housing and, most recently, the YMCA (where she served as board chair in 2016 – here’s a copy of her complaint, obtained by NBC10 WJAR). “I was comfortable with her response to all of it…. There are always two sides to the story.”

He continued, “She is absolutely the right person for the job. She’s done a lot already.”

Todd declined to elaborate but said there would be information forthcoming.

Todd said he was not concerned with Corrigan’s compensation. At $160,000 a year, with $24,000 in a retirement account contribution, Corrigan is among the very highest paid municipal chief executives in the state.

“I think this is one of the greatest communities in the state,” he said, “and we have a situation where we ought to be paying for talent.”

“She’s got a good track record in helping communities get to a better place,” said Bob Flanders, her former boss in Central Falls. “I think she brings a very solid base of knowledge about how a municipal government functions and she has a wealth of experience now in dealing wth difficult situations.”

As for whether or not East Greenwich needs a turnaround specialist is “irrelevant,” Flanders said. “The question is, can good management achieve efficiencies and … can a good manager and a good analysts help in that way. If they are going to have a manager that can help them do that, that’s a good thing.”

When asked if Flanders thought East Greenwich should be concerned about Corrigan’s litigious past, he said no.

“She’s proven herself over and over again as far as I’m concerned,” he said. “Having worked with her, I’m satisfied she is more than capable for the job.”

* “Laid off” replaces “fired” in the original version.