Corrigan Says Consolidation May Not Work 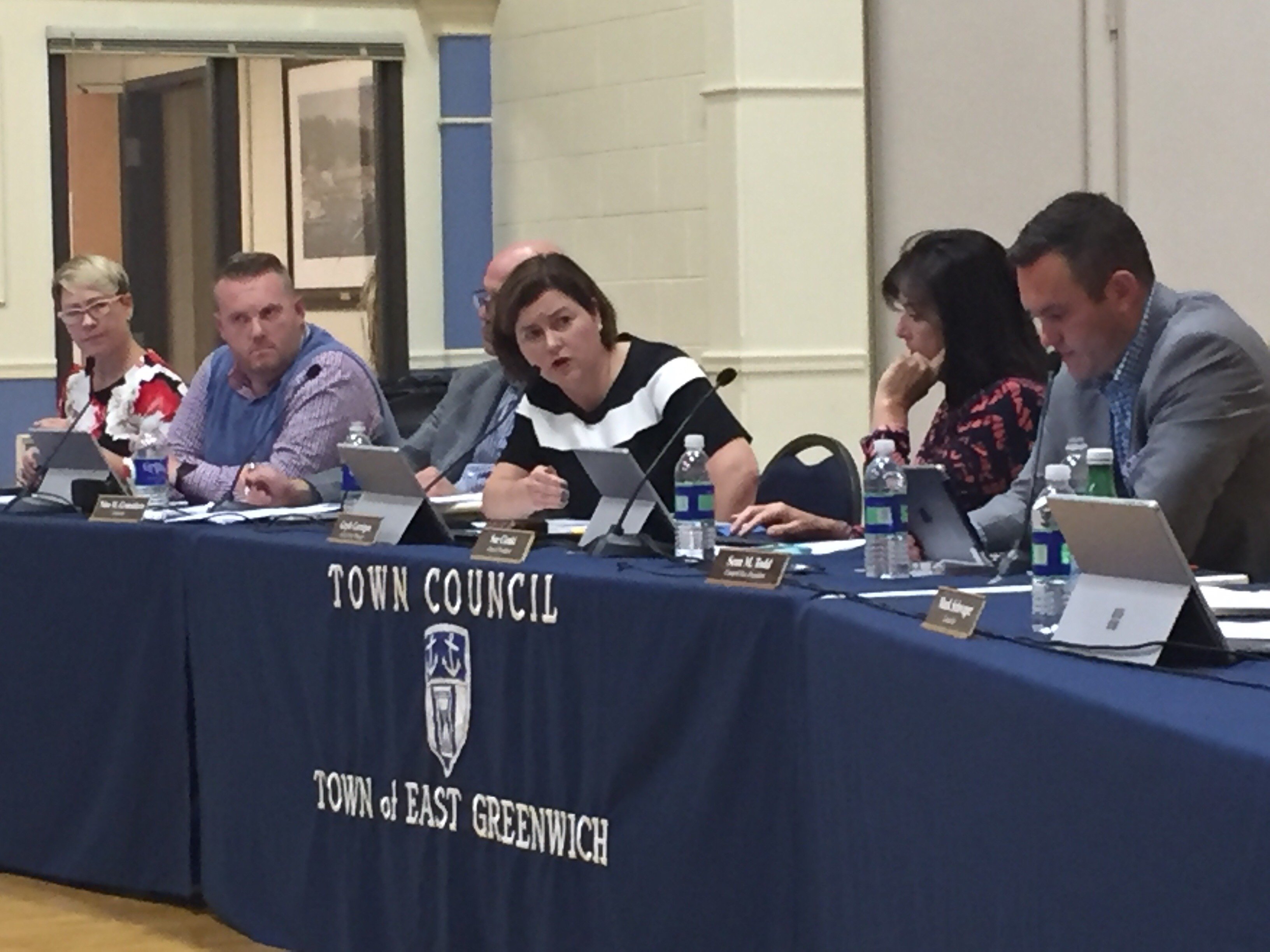 After coining the term “One Town” in June, Town Manager Gayle Corrigan seemed to want to lower expectations for further consolidation with the school district at the Town Council meeting Monday night at Swift Community Center.

“We’ve had several meetings now with members of the School Committee. It’s very clear that the path to consolidation will be a long one if we even get there, due mostly to concerns on the school side.”

Corrigan told the council she recommended shelving the draft Memorandum of Agreement (MOA) the School Committee had requested last June to memorialize both the town’s decision to take over the school district’s non-educational expenses and its pledge to allow the district to seek supplemental funding for special education if the need arose.

In September, the School Committee removed language in the MOA added by Town Solicitor David D’Agostino that referred to the town’s so-called “One Town” approach. School officials, according to Corrigan, said it was done because “the salaries and expenses assumed by the town in fiscal year ’18 were untethered to consolidation.”

On Tuesday, School Committee Chairwoman Carolyn Mark described the decision (made at the meeting Aug. 1) differently, saying the concern was that the expression “One Town” has no legal meaning and the MOA was a legal document.

“It can mean different things to different people – not something you want in a legal document,” said Mark. “The purpose of the MOA was simply to codify the decisions made in June.”

“We’re nearly one-third into the year,” Corrigan said Monday. “We really don’t have time to go back and forth in terms of semantics…. What’s ‘One Town?’ Define ‘One Town’?”

Corrigan added that the town was already paying the school salaries and expenses it had assumed. While that is true, the MOA also addressed the supplemental funding pledge, which has not yet been fulfilled.

One thing Corrigan said she wanted to do was to define the concept of documented need.

“What I’d like to do is shelve the Memorandum of Agreement but give a letter to [Supt.] Dr. Mercurio and the School Committee before their next meeting defining what is ‘documented need.’ I think that would go a long way to helping the School Committee and the schools’ understanding how we should work together in fiscal year ’18.”

Councilman Mark Schwager said the difficulties with the MOA could be blamed on the town’s approach to consolidation.

“Consolidation is something we’ve spent a long time talking about and trying to implement. The problem was the approach the council took to approach it unilaterally. You can’t dictate to the School Committee how they are going to spend their money…. You may have the best intentions, but there is another municipal body on the other side of the table that has the same statutory authority that we have. The only difference is, they can’t tax.”

Councilman Andy Deutsch brought up the suggestion he made the June 10 meeting when the council approved the 2018 the budget.

“I had an idea to keep a contingency fund for them because I knew they were going to have a tough time with this ‘One Town’ approach,” said Deutsch, noting that the idea had been dismissed by an unnamed councilor.

About giving the schools additional money, he added, “We’re very willing to do this but we need to show some documentation. You can’t just say, ‘We need more, we need more.’”

Earlier this month, school and town officials met to discuss having the town take over the district’s $45,000 sewer bill and to ask for additional funding (a supplemental appropriation) to cover the cost of opening an extra preschool classroom. Town officials said no to both requests – although Council President Sue Cienki did say she agreed with the idea of the town taking over the sewer bill in principle, just not this year.

On Monday, Corrigan said the reason the town didn’t give the school district extra money for the preschool classroom was because it was too early in the year to have a good sense of the school budget.

“The first quarter in a school budget – you might as well toss it away because school really only starts in September. July and August are not reflective of the monthly budgets,” said Corrigan.

According to the School Committee’s Mark, the district knew it would need additional funding in July, when enrollment spiked for the town’s preschool program – which serves children with special needs as well as typically developing peers who pay tuition. An additional class was opened – by law, the school district must provide for special education students.

“From the School Committee’s perspective, that was an appropriate request. When we met with the town to discuss the supplemental appropriation, their definition of demonstrated need was different than ours,” Mark said Tuesday.

While Mark welcomed Corrigan’s plan to provide a letter explaining the town’s idea of demonstrated need – “I was hoping she would because otherwise we’d be shooting in the dark” – she expressed concern that the town might spend the money it set aside to help the schools if the school district needed to wait until well into the year to prove its need to the town.

In June, when Corrigan, then serving as a consultant to the town, proposed cutting the special ed budget by $380,000, she said $330,000 would be set aside out of the town’s capital budget, to be given to the schools if there was a need, or else used by the town for capital projects.