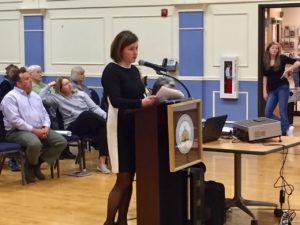 Town Manager Gayle Corrigan (left) presented another chapter to her look back at the 2013 merger of the East Greenwich Fire District into a town department, continuing her argument that it took place without due diligence and with grave financial consequences for the town. (Find her report here.)

As she has done several times in the months since she’s been town manager, Corrigan said the fire department was too expensive and needed to be fixed.

Her solution: restructure the department into three platoons that work 56 hours a week from the current four platoons and 42-hour work week. The town has sued the firefighters to be able to impose the restructure immediately; firefighters say they have a valid contract until 2019.

Corrigan’s report, while repeating arguments made in earlier reports, did take more exact aim at some of the people in charge in recent years. In particular, she cited what she said was the inexperience of former Town Manager Tom Coyle, former Town Solicitor Peter Clarkin and former Fire Chief Russ McGillivray in negotiating contracts.

However, Coyle served as police chief before becoming town manager and negotiated contracts in that position; Clarkin negotiated several rounds of contracts for three unions during his tenure in East Greenwich before adding the firefighter contract; McGillivray came from the larger West Warwick Fire Department and served as deputy chief in EG for three years before becoming chief. McGillivray and Coyle both hold master’s degrees in public administration.

Corrigan questioned the increase in the number of “service calls” (i.e. miscellaneous calls) between 2013 and 2014 (when the district became a department). As she said, the increase was due to the decision to classify alarm box resets as service calls.

In a phone interview Thursday, McGillivray (who took over as chief in 2013) offered this explanation for the classification change: “We were just trying to account for the hours and the work that the fire department was doing. When we went from the fire district to the fire department, I saw that social services and police department were very data driven and I wanted to get a better accounting of the work we actually did.”

Meanwhile, the total number of incident calls (including service calls) has risen steadily in recent years.  Even if service calls are subtracted, the fire department had more than 1,000 additional incidents in 2017 than it had in 2006, the year the fire district topped out at 36 total firefighters. In 2006 there were 2,386 incidents; in 2017, there were 4,121 (665 of them classified as service calls).

Corrigan also highlighted a jump in rescue billing rates between 2015 and 2016, but said she had not yet looked into the cause for the increases.

Former Fire Chief John McKenna (who served as chief from 2005 to 2010) was at the meeting Monday and during public comment he said that spike came after the billing company – Comstar – went from using a base rate and subcategories in its billing charges (for instance, separating out fees for starting an IV or using oxygen) to having one blended cost. McKenna, who now works in private industry, said the change was for all Comstar clients, public and private. McGillivray gave the same explanation Thursday.

In her report, Corrigan spoke about raises, saying some firefighters got a 48 percent raise in the current contract, while everyone else in town got 2 percent raises.

He said he did not know where Corrigan got the 48 percent figure.

During public comment Monday, Perry urged the council to talk to other municipalities where they have put in a three-platoon system. There have been four.

“Do your due diligence. We have an active contract,” said Perry. “I would hope that everybody would be adults and sit down instead of having attorneys become wealthy off the community. Nobody benefits from that.”

The last attempt to negotiate failed in December; both sides blamed the other side.

Corrigan said she would present “phase one” of her restructuring plan at the April 9 Town Council meeting.