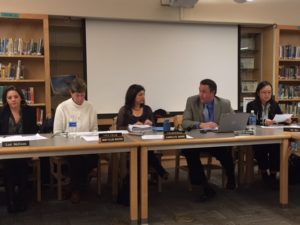 When the Town Council passed its budget for fiscal year 2018 last June, it underfunded the schools by $770,000, including a suggested cut by then-consultants (now town manager and finance director, respectively) Gayle Corrigan and Linda Dykeman to cut the special education budget by $380,000.

But the council held out the promise of supplemental appropriations if special education, in particular, and school expenses generally ended up costing more than was budgeted.

In fact, the Town Council voted to set aside $300,000 from the capital projects budget for just such expenses. If those expenses didn’t occur, the town would go ahead and use that money has it had been originally earmarked.

Nearing the end of the second quarter of the fiscal year, Town Manager Corrigan has laid out a tougher path to additional funding (Corrigan letter, Dec. 2017), including the requirement that the school department demonstrate what efforts it’s made to “remediate costs and operate in the most efficient and effective manner.”

The School Committee made one request already, in light of an additional pre-K classroom (cost $65,000) that was added over the summer because of increased special education enrollment. Corrigan and Council President Sue Cienki said they wanted to wait further into the year before considering such a request.

“It’s a very vague,” said School Committee Chairwoman Carolyn Mark at the the School Committee’s regular meeting Tuesday evening. “We were looking at criteria that was specific and we would be able to go around and document what our additional need is. And now there’s this amorphous sense of well, ‘If we think you’ll looked hard enough, then we’ll consider it.’”

Corrigan spells out four other criteria the schools must meet in order to obtain additional funds (see link to letter, above), including the current status of budget-to-actual expenditures. One of the actions taken by Corrigan shortly after she was named town manager was to appoint her colleague, Dykeman, to the role of finance director for the town. Not long before that, Dykeman had been hired temporarily to oversee school finances, which puts her in control of those numbers.

“I think we should make our request for the supplemental appropriation” at the joint Town Council–School Committee meeting Dec. 18, said Committeeman Jeff Dronzek.

“It’s not too early. The original confirmation was in the third quarter, which will start in January.” He added, “So, we basically said, we’re going to underfund our special education needs because you’re going to take care of them if the same thing happens that happens in any other year, where we end up with additional costs.”

“I was there at the meeting where there was a presentation to the Town Council,” said Committee member Matt Plain. “I don’t remember anything that resembles this. I don’t know that was the understanding of the Town Council and it certainly wasn’t the message at that time.”

“We presented [our budget] to the Town Council. They brought in their experts to redo the entire budget and move these numbers around. And now, [they’re saying] ‘Take money away from certain budget, but now, here you go, now it’s your problem. Good luck.’ … Needless to say, I’m pretty frustrated that that is … the town manager’s response to this process.”

Chairwoman Mark said she was worried it would be hard to even get the Town Council to consider a supplemental request.

“She seems to be making clear that it will only be considered by the Town Council upon her recommendation,” Mark said of Corrigan’s letter. “I just want to make sure that the Town Council is afforded the opportunity to consider our supplemental budget request.”

Mark added, “I certainly would like to see this on the agenda for [Dec. 18]. It is a joint meeting. We will each be posting our own agenda. It would be nice if we had agreement about what is on that agenda.”

In terms of needs for this year, resident – and longtime EG elementary school teacher – Judy Stenberg asked in public comment about the possibility of hiring a retired librarian as a part-time long-term sub for the EGHS library, (which does not have a librarian this year).

And the hope of adding a curriculum director midyear also came up. Supt. Mercurio presented a job profile for the position, in the event the School Committee decided to try to fill that position this school year, despite a lack of funds. The panel decided to review the profile again in January, forestalling any possibility of hiring someone in time for the start of the second semester. Mark said it remained a possibility for a spring hire, if things were to fall into place.

The next School Committee meeting is the joint session with the Town Council on Monday, Dec. 18. The panel meets again Tuesday, Dec. 19, in regular session – its final meeting of 2017.