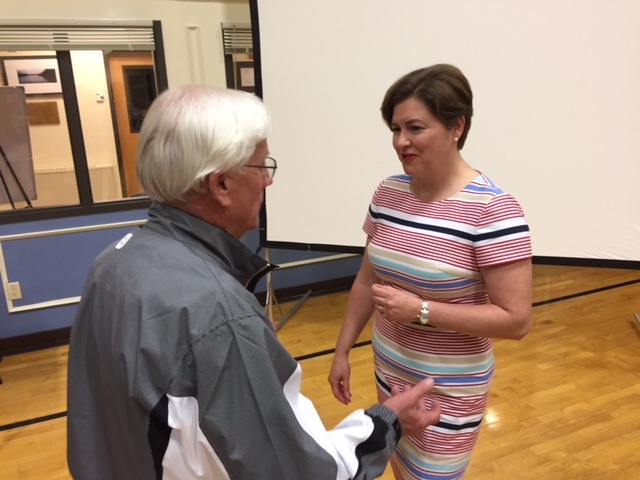 For the third time in just over a year, the Town Council voted Monday night to hire Gayle Corrigan to serve as town manager. The crowd was smaller – around 150 people in attendance as opposed to more than 500 – but no less vocal in its displeasure with the decision than it was last November, when the council approved Corrigan to correct an Open Meetings Act violation from the first time they voted her in, last June.

The vote was 4 to 1, with Councilman Mark Schwager voting no, just as he had the two previous votes.

Corrigan’s agreement with the town has no end date, meaning she can leave or be dismissed at any time. She would, however, get six months severance if she was fired, according to Town Solicitor David D’Agostino. Her salary remains the same, at $160,000 a year.

After the meeting, Corrigan said she would focus on the five municipal union contracts up for renewal in fiscal year 2019 (which starts July 1). She said she was also committed to “finding money to continue to fund the schools.”

As for whether or not she was competent, Corrigan said, “I am fit for the job and obviously the advisory committee and the Town Council agreed.”

One of those candidates, obviously, was Corrigan. The other was Russell Knight, who learned Thursday from a phone call with Council President Sue Cienki that the council had decided to go with Corrigan. 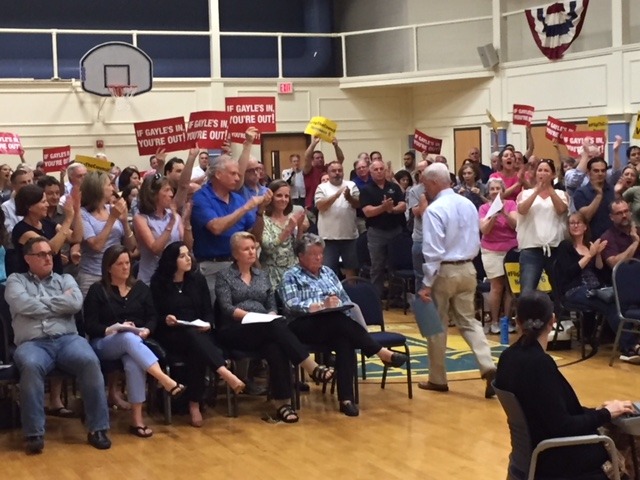 Russell Knight receives a standing ovation after he spoke during public comment Monday.

During public comment Monday – which Cienki switched to take place before the town manager vote – Knight spoke. He said he agreed that structural changes needed to be made and that he had the leadership and team-building skills to make those changes. But he also said he wished the Town Council and town manager well, that their success would be the town’s success.

What’s Happening in East Greenwich, And Why, Part 3

Resident Neal McNamara* questioned how the council could vote on Corrigan tonight if there had been two candidates that were considered. Didn’t that mean the council had actually voted in executive session, he asked. He suggested the Town Council had again opened itself up to an Open Meetings Violation, referring to the violation of the OMA in November over its vote in closed session to hire Corrigan in June 2017. That violation led to the special meeting in November at high school to repeat the vote on Corrigan in open session.

Town Solicitor David D’Agostino said the action taken Monday was legal. Later in the meeting Councilman Nino Granatiero said the decision to go with Corrigan had been made by “consensus,” not a vote.

Search advisory committee chair Jack Yena said the committee had felt good about both candidates it had recommended. He urged the residents to support the council’s decision. 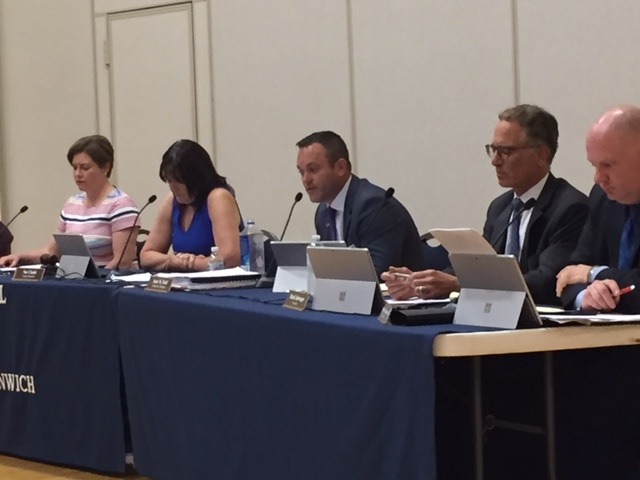 Council President Sue Cienki said Corrigan had accomplished many things since becoming town manager, including consolidating the town and school finance departments and getting a $50,000 loan repaid. She said other than the firefighters, relations with town employees were good. Council Vice President Sean Todd said he liked Russell Knight but decided to stick with Gayle Corrigan because of the five municipal union contracts up next year.

“Walking into five contract negotiations, I believe Ms. Corrigan is the right person,” he said.

In his comments, Mark Schwager said he was voting no on the Corrigan appointment.

“I share in the manager’s concerns surrounding a number of problems in town government that were brought to light over the past year,” he said. “… Identifying problems is only the first step; the other necessary skill is building a team and engaging the public to implement real solutions. And in this regard, the town manager has failed. Rather than working collaboratively to solve the challenges we face, the manager and the council majority have resorted to tactics that alienate and discredit valued community members, the School Committee, our public employees, and members of the local press.” (Read his full text here: Schwager Comments 6/25/18). 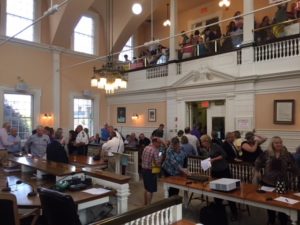 The meeting had been scheduled to be held at Town Hall but was moved to Swift Community Center after Fire Chief Kevin Robinson determined Council Chambers had reached capacity (115 people). Council President Sue Cienki said later they wanted to hold the meeting at Town Hall because the town had spent a lot of money renovating that space and that it was beautiful. She said it was moved to Swift for the comfort of those wanting to attend. The meeting, slated to begin at 7:30, began at 7:55 p.m.

Before the meeting, as he walked from Town Hall to Swift, 51-year town resident Arthur Vallelly said he was there because he was bothered by the quality of the discussion.

“It really turns me off,” he said. “I think a different approach could resolve the fire issue.”

*Full disclosure: Neal McNamara is married to this reporter.