The Boys team loses to Middletown in the state final

It was quite a golden season for the Cole Middle School soccer teams this fall, culminating in both teams making it to the state finals – on the same day, no less. The girls beat Kickemuit, 2-2 (7-6 after penalties). As it happened, winning during a shootout was the Cole Girls signature during the playoffs, winning that way in the quarter and semifinals, as well as the finals. 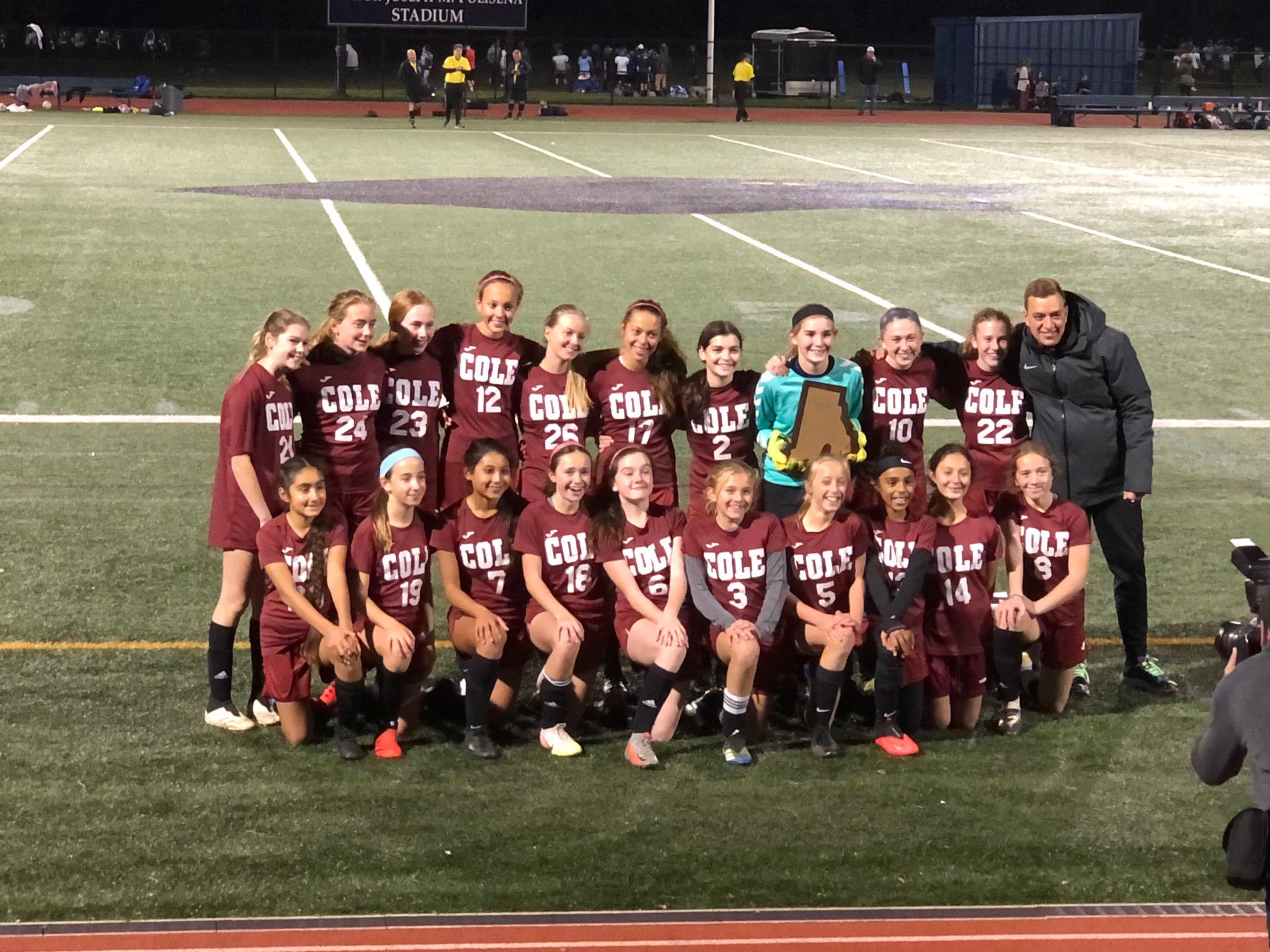 “Our goalkeeper – Elizabeth Johnson – saved 5 penalties in those shootout games and then took the winning penalty kick herself to win it for us,” said Coach Aleksej Skundrik. “Ella Kauffman was our player of the season – of the competition really.”

The team went 12-3-0 on the season. Skundrik said the schedule helped them out a bit, since the season is short and there’s little time for practice before the first games take place. But before the season even got started, he said, the team talked about its hopes for the season. The takeaway: they wanted to win the state championship.

“As we kicked the season off and got a few wins under our belts it was clear that certain things had played into our hands,” said Skundrik. “We were lucky enough to play some of the easier [teams] at the start of the season and some of the harder ones toward the tail end, which gave us a bit more time to improve as a team. With each game we played we were that much closer to our goal and the girls believed in our chances that much more.”

By the time the regular season had ended and the team was undefeated, they focused on those areas of the game that can change the outcome of a game: corner kicks and penalty kicks. Skundrik knew Johnson in goal would be hard to beat. The defense was strong too, with opponents going scoreless against the Lancers in the playoffs.

The work on both corners and penalty kicks paid off.

“We got our first goal in the playoffs as a result of our corner routine and we got both goals in the finals from it,” said Skundrik.

“The fact we won three of our playoff games in a penalty shoot out attests to the incredible mental strength and character of the girls and their resilience,” he said. “Everyone had their own contribution on the field during the season, but all the girls contributed equally in the winning mentality and overall team environment adopted by the group. That was what made us find ways to win games and that is what got us over the end line.”

“In Ella Kauffman we had the best player in the state who led the team with goals and assists,” said Skundrik. “She also led in the areas not often talked about enough; balls intercepted, header won, tackles won, and distance covered. However Ella’s greatest contribution was her leadership skills. She led by example by always putting 100 percent of herself into everything she did but she also had an incredibly positive demeanor which always brought out the best in her teammates.”

The boys also made it to the championship, facing the only team – Middletown’s Gaudet Middle School – that beat them in the regular season. They lost 6-0. Coach Jason Birkett said Gaudet was a tough competitor.

“They went undefeated all year. They were definitely the best team in the league and deserved to win,” he said.

“This was by far one of the most rewarding seasons for me,” Birkett said. “It was just a great group of kids; it was a lot of fun.”