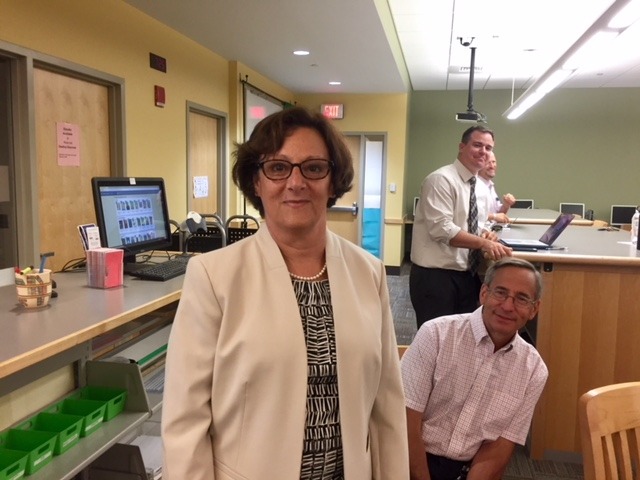 Perhaps we can excuse Alexis Meyer if she arrives late to work one fall day because she happens to turn onto Cedar Avenue on her way to her new Peirce Street office. That’s because as an East Greenwich educator, Meyer has only ever worked at Cole Middle School, first as a paraprofessional, then as a teacher, then as assistant principal and, finally, as principal. She has spent 22 years at Cole.

The School Committee approved Meyer’s appointment as the district’s long-awaited director of teaching and learning at their meeting Tuesday night.

Supt. Victor Mercurio has never had someone on staff dedicated to teaching and learning. The district had a curriculum director but that was more than 10 years ago.

“She has a deep appreciation and respect for not only the complicated processes of teaching and learning but also the human beings that are behind these processes,” Mercurio said of Meyer. He lauded her leadership at Cole through the construction of a new building as well as its change from a junior high to a middle school.

“That required a rethink of how we go about curriculum and instruction,” he said, adding, “At every step of the way, throughout her career, she’s been engaged in learning of her own on a professional level.”

“I have heartfelt mixed feelings,” she said Tuesday. “There will always be a piece of Cole Middle School in me.”

Meyer grew up in East Greenwich and attended East Greenwich schools, including Cole. She graduated from URI, where she she met her husband, Bob Meyer. They lived in New Jersey for five years, where Meyer worked in business. But after their first child was born, Meyer said she really wanted to raise her family near her family, so they moved to East Greenwich.

Although Meyer had a degree in education, her teacher certification had lapsed while she was living in New Jersey, so she decided to work as a paraprofessional while she worked on getting recertified – just to make sure she liked working in the classroom. She got a job at the then-Cole Middle School.

She did, and the rest is history.

As for what happens at Cole, Mercurio said they will  post the principal position right away but that Meyer will be on hand for the start of school.

“We want her to start as soon as she can but she obviously has obligations and responsibilities at Cole,” Mercurio said. “She’s the first person to say, ‘I need to be back here to open school.'”