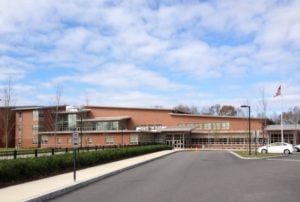 More than four years after the initial complaint was filed, the lawsuit against the town, the school department and various construction companies by homeowners over damage they say was caused by construction of the new Cole Middle School is slated to begin Monday (Feb. 29, 2015).

Scheduled as a 10-day jury trial, it will be heard before Superior Court Judge Bennett R. Gallo at Kent County Courthouse.

Three couples who live on Sarah’s Trace, just west of Cole, say construction of the new Cole Middle School caused cracks in their walls and foundations, threatening the structural integrity of their houses.

Construction on the new school begin in fall 2009. Homeowners Chris and Sue Lamendola, at 50 Sarah’s Trace, and Tom Hogan and Cynthia Pelosi, 40 Sarah’s Trace, sought help from the town early on, after they said they noticed cracks in their homes. They went public with their complaints in November 2009, filing a police report to document to the damage.

At issue, according to the homeowners, were the vibrations caused by construction machinery. Homeowners asked contractors to stop using large vibratory rollers to compact the earth but the construction team said they could not guarantee the structural integrity of the school building without using the rollers and use was continued.

Seismic readings taken by engineers hired by the contractor failed to show that the vibrations were sufficient to cause the kind of structural damage reported by the homeowners so insurers refused to cover costs of repairs. The homeowners, meanwhile, questioned the validity and timing of the seismic readings.

The Lamendolas and Hogan/Pelosis filed their lawsuit in February 2011, with plaintiffs Keith and Wendy Amelotte, at 35 Sarah’s Trace, signing on a short time later.

In July, the Town Council approved a settlement with the three Sarah’s Trace homeowners that reduced their property tax bills by 50 percent over four years (2013-16). The cost to the town will be around $70,000 – the exact cost won’t be determined until the tax rate is set for fiscal year 2016. Included in the settlement, the town agreed to pay up to $8,000 in legal fees and court costs.

The homeowners (plaintiffs) have so far subpoenaed 16 people to testify in the trial. Here’s the list of those subpoenaed as of Feb. 24, 2015:

Bob Durante – member of the EG School Committee from 2008-12

Ilene Hoffman – resident of 47 Lillibridge Drive; has complained about damage to their home from the construction

Peter Hoffman – resident of 47 Lillibridge Drive; has complained about damage to their home from the construction

Michael Isaacs – president of the East Greenwich Town Council from 2004 to present.