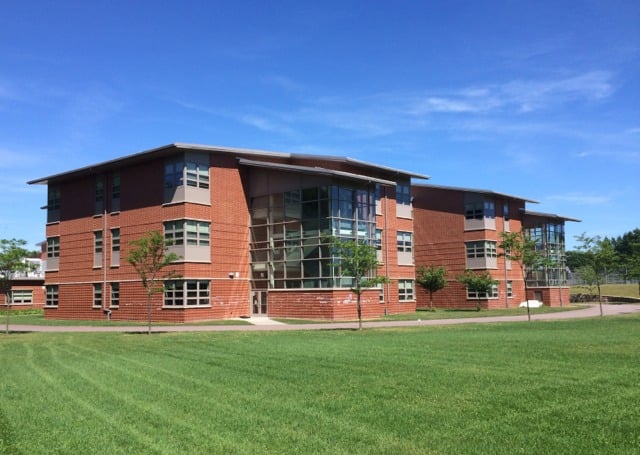 Supt. Victor Mercurio took the stand Thursday as the first of potentially dozens of witnesses in a lawsuit brought by homeowners against the town and several companies over construction of the new Cole Middle School in 2009 to 2011. The homeowners say vibrations during construction caused cracks in their houses.

The homeowners are three couples – Chris and Susan Lamendola, Tom Hogan and Cynthia Peloso and Keith and Wendy Amelotte – who own houses on Sarah’s Trace. The Lamendola and Hogan/Pelosi properties abut Cole Middle School; the Amelotte house sits across the street. They filed suit in 2011 saying construction of the new school building damaged their houses and that the town and other defendants were negligent.

The jury trial is before Superior Court Judge Bennett Gallo.

On Thursday, plaintiff’s lawyer David Maglio asked Supt. Mercurio about events that took place after Chris Lamendola first notified the town that his house was being damaged by construction vibrations, in December 2009 (construction began in November 2009).

Did Strategic Building Solutions (SBS – the c0mpany hired by the school department to manage the project) tell you the vibrations were anything out of the ordinary for this type of construction?

Seismic monitors were put in place to protect the homeowners, correct?

Use of smaller earth-compacting equipment was never attempted?

Yes, it was never attempted.

Did someone say that earth-compacting vibratory rollers had to be used because they were specified?

The new school was open in April 2011, allowing the then-8th graders a chance to experience the new building. Was it mandatory that it open in April?

In June 2010, then-School Committee Chairwoman Jean Ann Guilano ordered the contractor to stop using vibratory rollers. “Construction change directive #6” was drafted to make that action official but it was never signed because the School Committee never voted to approve it. Mercurio said he didn’t recommend approval because the architecture and engineering firm SMMA “wouldn’t sign off” on the project if the directive was signed. SMMA said changing the method of construction could risk the structural integrity of the building so it would withdraw its warranty.

Jay Gowell, head of the advisory School Building Committee from 2005 to 2012, was next to be called to the witness stand. Gowell, resident of East Greenwich, served as a volunteer on the panel.

In answer to Maglio’s questions, Gowell said original construction cost estimates for the new Cole had been in the $30 million range but bids came in much lower because of the recession. The big by Gilbane was $22 million. Gowell explained that while other sites were considered, the school was built on the same property as the old Cole because it was the only one that really worked.

After the homeowners complained about damage and SBS recommended they install seismic monitors, Gowell said he asked why they hadn’t done that before but said he was told the type of work being done didn’t usually cause vibration damage.

Attorney Maglio brought up several emails that Gowell either wrote or was party to, including one in which Gowell said “a citizen” (he admitted it was Lamendola) was being given a lot of attention and was wielding more political clout than the rest of the town.

The town had already spent $1.1 million on Mr. Lamendola, Gowell told the court. He’d explained that complaints from Lamendola after the new school was designed had prompted the committee to move the site of the building 100 feet farther away from the property line shared with the Lamendolas. That redesign cost $1.1 million.

Maglio, however, asked Gowell if there weren’t other people, in addition to Lamendola, who had both expressed concerns about placement of the new school building and had complained about vibrations during construction.

In another email to SBS head Jon Winikur from July 2010, Gowell called both Lamendola and the Town Council “entirely unreasonable.” The Town Council had been pressuring Gowell and Winikur about the homeowners’ complaints.

When questioned about the emails by defense attorney John Donovan (for Manafort Construction), Gowell said he felt bad that Lamendola was so upset since “we had taken extraordinary steps,” including moving the school building and installing seismic monitoring devices.

“It just seemed like, at every step, no matter what we did, it wasn’t enough,” Gowell said.

Maglio then reminded Gowell about an incident in which a construction worker was arrested for throwing a rock at Lamendola, who often watched construction from behind his property line.

Jon Winikur is due to testify on Friday, but only after the jury gets to see the three houses and the middle school in a visit to the area Friday morning.

After the jurors were dismissed for the day, defense lawyers asked that they be allowed to go through the plaintiffs’ houses before the jurors in case there might be something inside that could prejudice the jury. An angry Maglio said he withdrew his consent for the tours, which had been sought by the defense.

“It’s insulting to suggest they would stage their houses to illicit sympathy,” said Maglio.

However, Judge Gallo agreed to let a couple of the defense lawyers preview each room before allowing the jury access. If there was an issue, it would be dealt with before the jury entered the room.