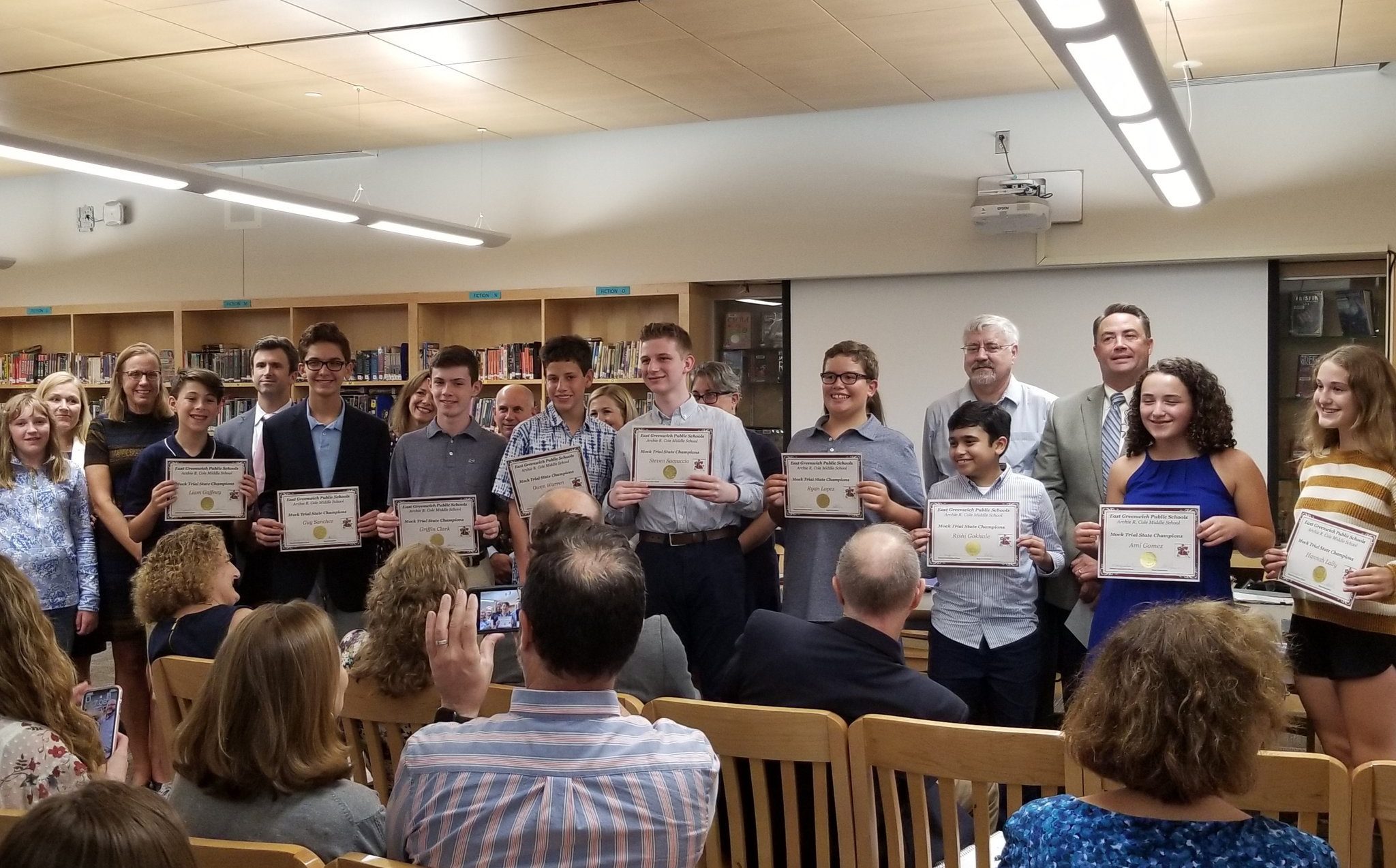 The Cole Mock Trial team, reigning middle school champs after winning the competition last spring, will start meeting soon to prepare for the 2020 competition but the sweet taste of victory is still present for the team’s coach of several years, Cole social studies teacher Jody Mangiarotti.

“This was the first Cole team to win,” she said in a recent interview. “They took a great amount of pride in it and they worked so hard.”

The Cole 2019 Mock Trial team after the competition.

While they have lost a few students to high school, many of last year’s sixth and seventh graders will return, along with any new students who make it The process of getting on the team may be hard but once you’ve made it, you are on. You don’t need to try out again the following year.

“It’s a very fair tryout,” Mangiarotti said. Preparation is key. Older students do not get preference; everyone is on the same footing, she said. “It all comes down to the tryout.”

Last year, 17 students were on the team. As many as 60 students have tried out in a single year.

Mangiarotti has been coaching for about 10 years, she said, ever since now-Eldredge Principal Dan Seger (then a teacher at Cole) asked her to coach with him.

For several years, parent Mike Donegan (now on the Town Council) helped out with legal prep. Now Melody Alger, also a parent, is providing the legal prep. And there’s a lot of prep.

Every year, the team gets a new case. Last year’s case was about a distracted driver, but in the past the cases have been about a murder and a cult to name a couple.

The team has to prepare to both prosecute and defend the case – they only find out at the competition which side they get. Three teammates play witnesses, one expert and two civilian witnesses. Two other teammates play lawyers, one for the opening and one for the closing. For the 2019 competition, both lawyers for the Cole team were 6th graders.

Mangiarotti credits Alger with excellent legal coaching, teaching the students how to handle cross examinations, how to behave before the judge, and how to deal with the jury.

“You have to build your case brick by brick,” Mangiarotti said Alger told the team.

“They took their jobs so seriously,” she said.

One extra thing the team did last year that may have made the difference, Mangiarotti said, were several “mock” mock trials they practiced, which helped them iron out any kinks. They also got to see the high school team compete, which helped.

So, starting later this month and going all the way until June, the 2020 Cole team will be meeting twice a week, building their new team . . . brick by brick.

Help us keep reporting! Become a sustaining donor or make a donation by clicking on the link below. Thanks!