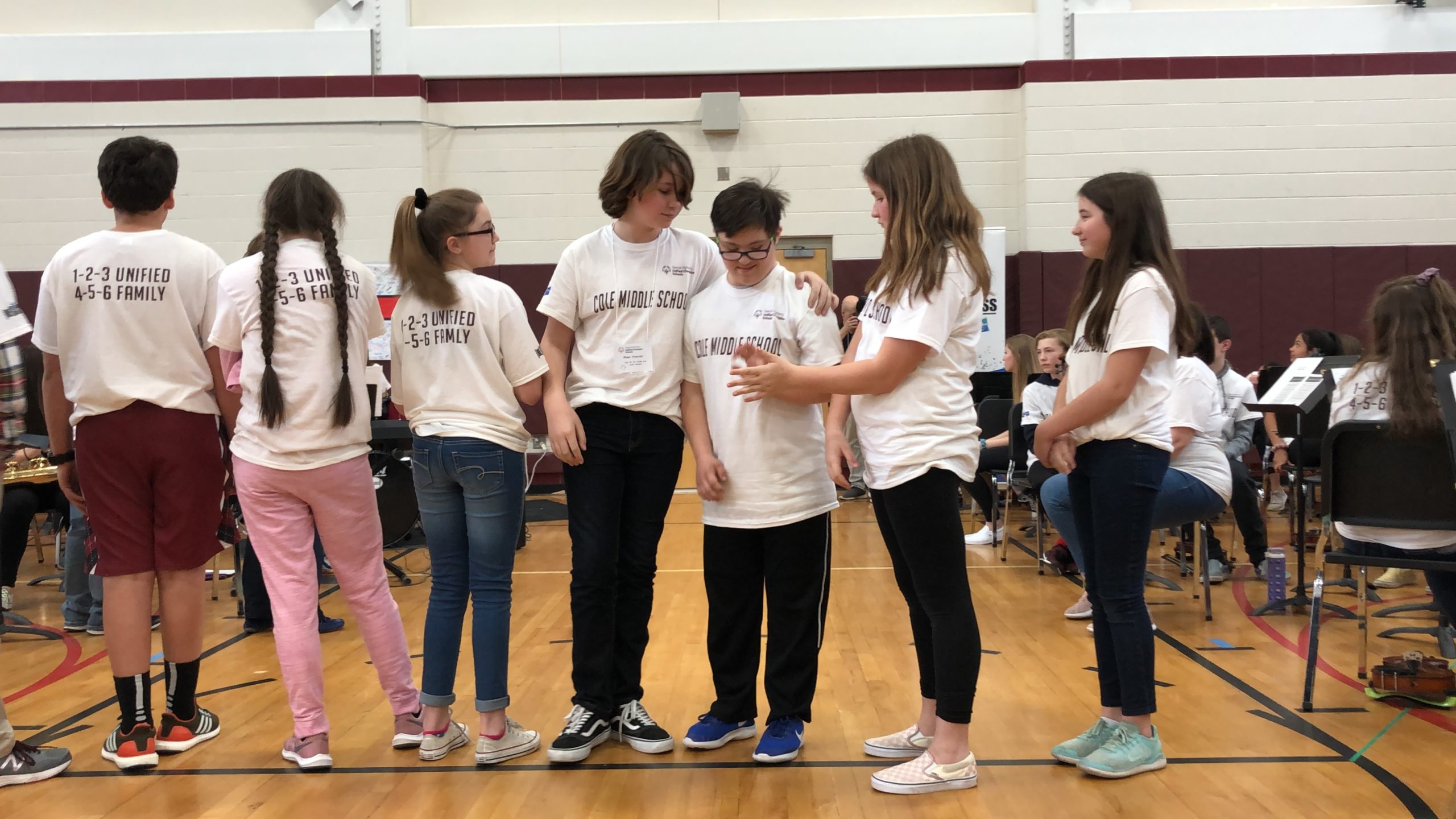 Above: Members of the Cole Unified Cross Country team get ready for the banner unveiling Friday.

Billy Gilman, former Patriots player Patrick Pass, and a host of state and local bigwigs joined the student body of Cole Middle School in the gymnasium for a rollicking celebration of the school’s designation as a Special Olympics Unified Champion Banner School Friday. But the real stars were Unified athletes themselves, two who spoke of the importance of Unified Sports and one whose solo during the Cole Chorus’s rendition of “This Is Me” brought down the house. (Find videos of the speakers and the Cole Chorus at the bottom of this post.)

“I learned through Unified sports by learning from my team members. Best Buddies and Unified sports helped me to feel more comfortable around people,”  EGHS senior Chase Manning told the crowd. Manning, accompanied by three of his teammates, has played on Unified teams for years. “Having friends can help me make a big difference in life,” he said.

Cole is the only middle school in Rhode Island to have earned National Unified Bannner School status. The path to that recognition began 10 years ago, when East Greenwich High School joined nine other high schools in the state to form a Unified Basketball league. Unified sports pair students with disabilities (athletes) with typically developing students (partners). Aspects of the games or meets are modified to accommodate the athletes – in volleyball, the athletes get two changes to get the ball over the net for a serve, for instance. But competition can be tough and full of drama as the points see-saw back and forth. Still, sometimes there’s the situation where an athlete might miss a shot in basketball, say, and a player from the other team will rebound, then return the ball to the athlete for another try. 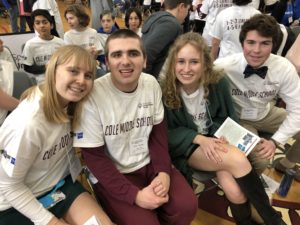 EGHS now has Unified Volleyball as well as basketball. Cole first started with a Unified Basketball team in 2014. Two years ago, Cobain and Cole Unified coach (and science teacher) Adam Scott, wanted to add a second Unified sport at the middle school and opted for cross country. The league wasn’t quite ready to take that on so, with the help of Chris Hopkins and Casie Rhodes from Special Olympics, Cobain and Scott established a pilot program last year, together with North Kingstown and Coventry.

“We held a meet at each one of our schools to try to figure out. What’s the appropriate distance? How will the kids handle it? How to manage it,” Cobain explained. “We went through that trial year and went back to the league and said, we have the answers and they adopted it this past year. Now we have full-time cross country and basketball here.”

Cobain, who’s father served as special education director in Bridgeport, Conn., said adding Unified sports to the EG athletic program was a natural for him.

“I spend my days dealing with what we believe to be our partners’ athletic world,” he said. “For this opportunity to create another whole set of opportunities for all athletes, including our athletes in our Unified world, was such an amazing opportunity that I couldn’t turn it down.” 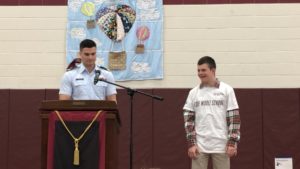 Kyle and Matt Carosotto, brothers and Unified participants past and present.

Kyle Carosotto, EGHS Class of 2012, is a member of the U.S. Coast Guard now but back in high school, he was on the Unified Volleyball team the year it was established. His mom, Patty Carosotto, was the coach. The inspiration for them both? Kyle’s younger brother, Matt, now an 8th grader at Cole.

“It’s an amazing thing to see what it’s become from just my mom taking over the coaching and my joining the team when it was something small. And now seeing a whole school coming together for this award, it’s honestly an amazing thing. I’m so happy to be part of it,” Kyle said before the assembly began. Later, he would talk about how his Unified Volleyball experiences – including a national championship in 2012 – shaped him.

When the performances and most of the speeches were over, it was finally time for the unveiling of the banner. Cole’s Unified athletes were called up one by one and then a countdown and there it was, Cole’s Special Olympics Unified Champion School banner took its place on the wall in the gymnasium.

Cole students link arms as the banner is about to be unveiled.

Adam Scott, who also advises the Cole Best Buddies program, was the last to speak.

“We are Cole and there’s a sense of community and family that makes us what we are and why we have received these tremendous recognitions. It’s how we interact with one another in the hallways, the fields, the courts and the classroom. It is how we include each other instead of pushing people away. It is how we have created a school community here at Cole and in East Greenwich that promotes friendship over bullying, inclusion over exclusion, respect over hurtful words and acceptance over putting someone down,” he said.

‘We all share this award together … including our Cole graduates who are now Avengers. You all have a piece of that beautiful banner. Each of you is a piece in our Unified family puzzle that makes us Lancers.”

Scroll down for videos and additional photos from Friday’s event.

It was a packed house Friday.

Leah Gendron spoke about the impact of Unified sports has had on her sons, one at Cole and one now at the high school.

Patrick Pass sign one of the Nerf balls distributed by Hasbro at the assembly.

East Greenwich News is a nonprofit corporation. If you like what you’re reading, please help us keep doing this work – click on the donate button below or send a check to EG News, 18 Prospect St., E.G., RI 02818. Thanks!