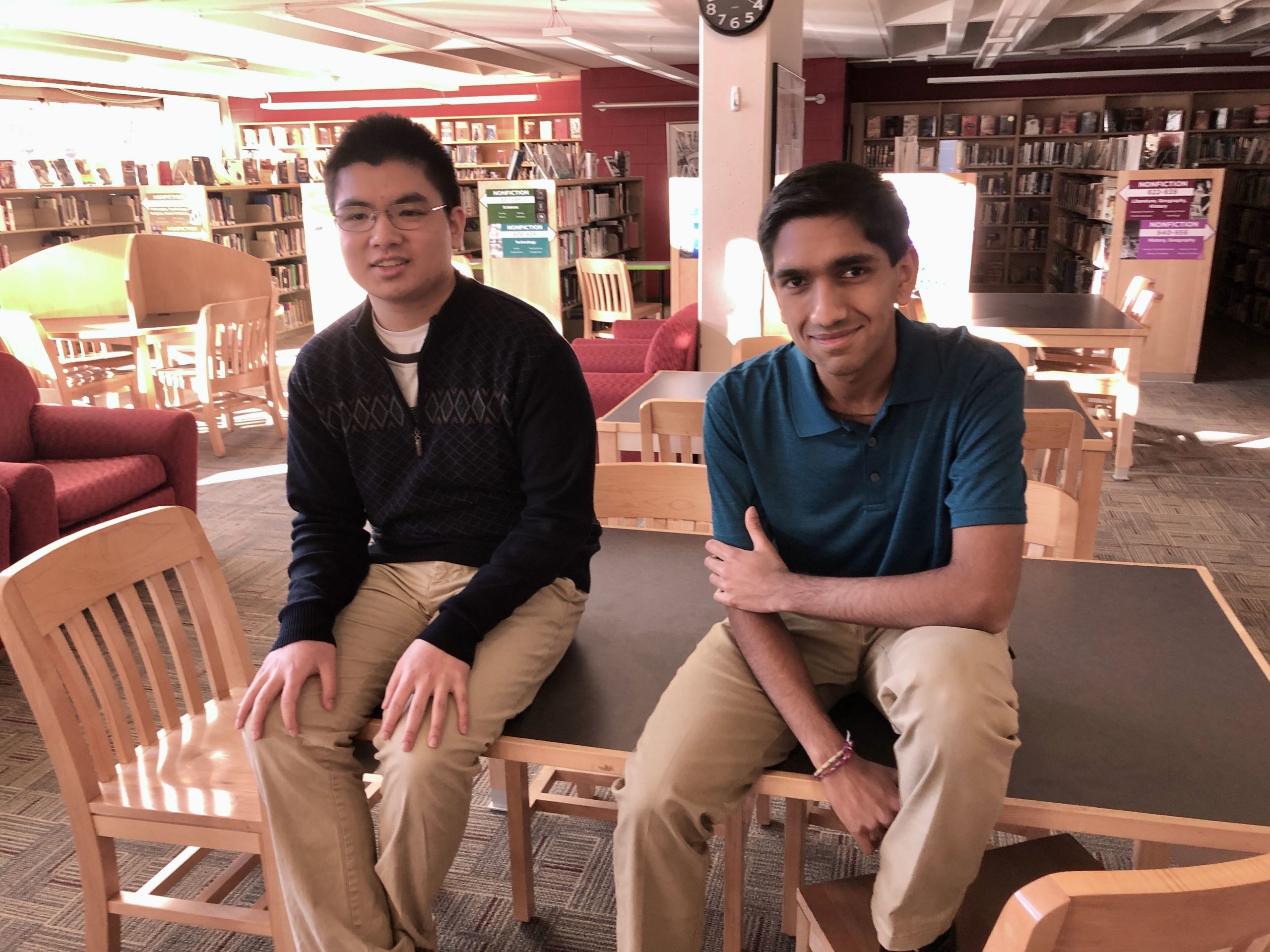 Above: Brant Wei (left) and Suraj Sait, salutatorian and valedictorian for the EGHS Class of 2020.

Suraj Sait and Brant Wei captured top honors earlier this month when they were named valedictorian and salutatorian, respectively, for the EGHS Class of 2020.

“It feels great, honestly. It’s like the culmination of four years of hard work,” said Sait, who goes by Sunny.

“It feels great to see the result of our hard work and to see it be recognized,” said Wei.

The two both happened to move to East Greenwich at the start of sixth grade – Sait from New Hampshire, Wei from Maryland – and they share a lot of interests.

Both are on the math team, are leaders in the school’s Future Business Leaders of America chapter and are part of Model UN. And they both play piano for relaxation.

Sait, who runs cross country and competes in track, has been active in student council and helped start up a school debate team this year. He’s on the Science Olympiad team and is a member of High School Democrats of Rhode Island. Outside of school, Sait does some tutoring and has done research at both URI and Brown. He also writes for East Greenwich News.

“I’m also deeply passionate about social activism, and have spoken in favor of financial literacy, climate reform, and participation in our democracy,” he said.

“I enjoy playing the piano, biking, swimming, and reading about global affairs,” he said about life outside of school.

So, do they ever sleep?

Turns out, they both do (which is perhaps a lesson in itself): Sait said gets six or seven hours a night; Brant gets seven and a half hours of sleep a night.

Still, both Sait and Wei concede it hasn’t been easy.

“It’s tough to keep working late at night, especially when you would rather sleep,” Sait said. “That, combined with juggling extracurriculars, family and friends, as well as personal time, made it really hard to maintain my motivation sometimes.”

Wei also spoke of the challenge of balancing everything.

The school has served them both well, they said.

“I had to work very hard to do well. I’ve always felt challenged by the curriculum,” said Sait.

“I think that East Greenwich High School is quite rigorous; however, I wish that there were honors geometry and civics classes,” said Wei.

With regard to student stress, Wei said he thought students needed some perspective.

“I think that it would be beneficial for students to read about people who have experienced more significant challenges, such as people who live in war zones and extreme poverty, or people who live with severe disabilities,” he said.

Sait said he thought students needed to learn that failure was acceptable.

“If there was some way to effectively communicate that one grade doesn’t decide your future, I think many students would feel less stressed,” he said. Sait got a B+ in Honors Algebra 2 his sophomore year. That may not have been a bad grade for most of us but, for Sait, that grade was “pretty devastating.” It was hard, he said, because it was (and remains) the only non A grade he’d received in high school. “That ‘failure’ taught me how to study and strategies that worked for me,” he said.

Sait discounted the idea that EGHS is too competitive. Sure, many students want to do well, but he said, if Wei had earned the valedictorian spot, “I’d be fine with that.”

“A lot of us have a love of learning that goes together with competition. I think it’s a really friendly competition and I think it makes us all better.”

Sait and Wei will both speak at graduation in June.