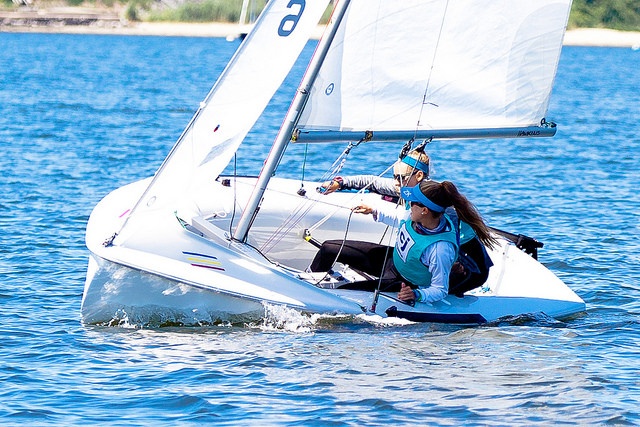 Next Monday and Tuesday, hundreds of sailors, parents, coaches, and volunteers will flock to Greenwich Bay, gearing up for a competition that will span two days and over 200 races. The occasion? The C.J. Buckley Regatta.

The regatta, held every late July, is named after a talented, competitive young sailor who tragically lost his life to brain cancer in December 2002. He was 16.

Seven months after his death, his parents and friends organized the first C.J. Buckley Regatta in his memory. Only 20 boats participated that year, but the event has grown. It’s gained such a reputation that since 2009, it’s been the Club 420 Association’s National Junior Team Racing Championship.

In sailing, team racing differs from fleet racing in a few ways. While fleet racing involves multiple boats vying to be the first to cross the finish line, like a marathon, team racing involves one team versus another, going head to head. Each team is composed of three boats, with two sailors assigned per boat. The overall team score is calculated by adding up the results of each boat in the team; first place receives one point, second place receives two, and so on. Because of this points system, teams must use various tactics to impede or slow other teams from crossing the finish line before them.

This year, 24 teams from around the country will come to enjoy the form of racing that C.J. did. Despite how large the regatta has become, it is still run and judged by volunteers – more than 75 volunteers make the regatta happen.

“Most umpires are college sailing directors,” noted Buckley, adding that “a core of families have been helping volunteer since the beginning.” 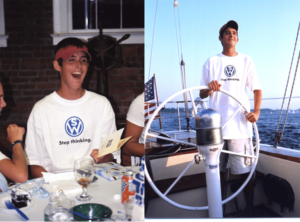 One such family is the Baeder family. “We’ve been involved since the beginning, 17 years ago” said Doreen Baeder. Doreen’s son sailed at GBSA during the time when C.J. sailed, later on helping to organize the regatta. “We can’t imagine their loss,” she said. “It’s really an honor for us to [volunteer] each year.”

Though the regatta does charge an entrance fee, the majority of funds come from donors and sponsors. These funds go towards providing meals throughout the regatta, but also to helping less privileged young sailors “get out on the water,” said Buckley.

Apart from this charitable cause, the regatta is also special in its pace. Though there are 144 sailors participating in the regatta, there is a “constant cycling of the two teams over the race course,” explained Carter Buckley, Lucy’s husband and CJ’s dad. “They don’t sit around.” Simultaneously, there’s a round robin that ensures “a team will eventually be sailing against a team of equal ability,” he said, due to your number of wins and losses. Although you may initially sail against the “best or worst [sailor], you end up sailing against your own peers,” he said.

Many young sailors enjoy this quality of the regatta, which has become a staple of the sailing community. “Part of the reason kids love it is because it is fast-paced and well-organized,” said  Lucy Buckley. “Kids keep coming back, families keep coming back,” she added.

Unquestionably, the regatta keeps the memory of CJ alive. Said Baeder, “It’s a wonderful tribute to the young man.”

You can find out more about CJ and the regatta here.

Suraj Sait, a rising senior at East Greenwich High School, is an intern for East Greenwich News. He has written about the EGHS girls cross country team, vaping at EGHS, and Girls Softball state champions.