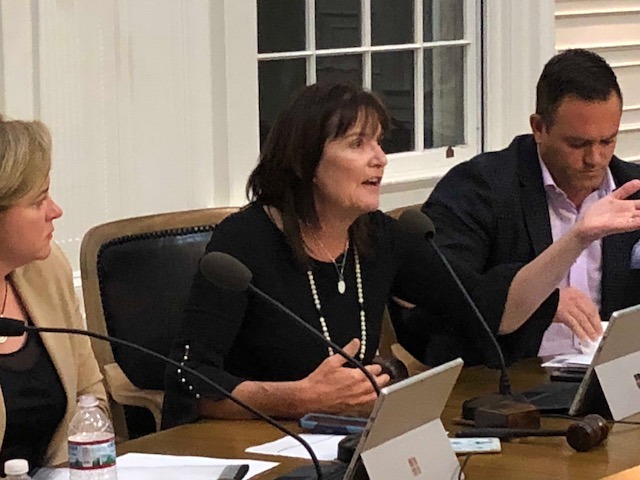 East Greenwich’s Sue Cienki won a four-way contest for chair of the state Republican Party Saturday, in the second ballot, taking over for two-term chair Brandon Bell, who did not run for a third term. Cienki lost her bid for re-election to the EG Town Council in November, after a tumultuous two years as president.

Across the board in November, Republicans lost in East Greenwich. In addition to Cienki, Andrew Deutsch lost his re-election bid and newcomer Charles Callanan also lost. For the first time, East Greenwich elected five Democrats to the Town Council. On the state level, Republican Anthony Giarrusso lost his bid for re-election to House Dist. 30 to newcomer Democrat Justine Caldwell. In the race for the open Senate Dist. 35 seat, Democrat Bridget Valverde defeated Republican Dana Gee.

Things aren’t quite that bad for the GOP on the state level, but they are grim. Republicans have been a small minority in state government for years but they lost more General Assembly seats in November, with only 5 state senators out of 38 and 9 state representatives out of 75. All state officeholders are Democrats.

Cienki spent much of her time as council president arguing that collective bargaining agreements were bankrupting the town. Under her tenure, East Greenwich property owners got a tax cut in fiscal year 2018 and the tax rate held steady in 2019. To get that flat tax rate, the 2019 budget relied on using $1 million in surplus, keeping vacant jobs unfilled, and continuing to underfund capital maintenance.

East Greenwich News is a nonprofit corporation. If you like what you’re reading, please help us keep doing this work – click on the donate button below or send a check to EG News, 18 Prospect St., E.G., RI 02818. Thanks!