A brochure mailed out last May said taxes increased 51 percent between 2011 and 2016; the actual percentage increase was less than 15 percent. 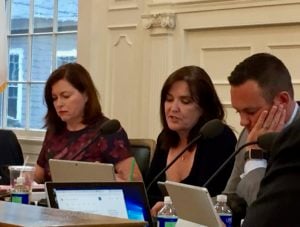 Council President Sue Cienki, center, during a Town Council meeting in June. Town Manager Gayle Corrigan is to her left and Councilman Sean Todd is to her right.

Town Council President Sue Cienki posted a notice on the town website’s homepage late Friday and included it in the weekly email to residents Saturday that admits a brochure mailed out by the Town Council in May had a significant error. The brochure stated that the median tax bill in East Greenwich increased 51 percent between 2011 and 2016. Cienki said the actual increase was 15 percent. (Find the brochure here: Town of EG May 2017 Brochure.)

Cienki blamed “former Town administrators” for the error and credited an unnamed resident for bringing it to the attention of town officials.

That resident is Eugene Quinn, a Stonehill College assistant math professor who thought the percentage increase looked way too high when he received the brochure in the mail.  His own tax bill hadn’t increased anything near 51 percent.

He first brought up the discrepancy at a Town Council meeting in June. Quinn kept at it over the next several months until he and another resident, Anne Musella, sat down with Cienki, Vice President Sean Todd and resident and informal council advisor Stuart Peterson in December to discuss that 51 percent figure as well as a couple other disputed statistics released by the town.

By the end of that meeting, Cienki acknowledged the 51 percent figure was wrong. But then at a Town Council meeting Jan. 22, Cienki reiterated that the figure had to be higher based on her examination of property taxes for about a dozen houses in town.

On Friday, however, Cienki admitted the error.

In May, 2017, a mailing distributed by the Town Council contained some data points provided to us by the previous Town administration that we have learned are factually inaccurate.

The Town’s current administration has reviewed the data and determined that the correct figures for the median tax bills in fiscal years 2011 and 2016 were $8,186.59 and $9,408.06, respectively, which equate to a median tax bill increase of 14.92% over that time period.

On behalf of my Council colleagues, I’d like to thank the resident who brought this matter to our attention, and Town Manager Gayle Corrigan and Tax Assessor Anthony Davey for providing us with the accuracy and precision we need from our Town administrators.

Quinn said he was glad to see the number corrected but he still had reservations.

“So on reflection I’d say that while I don’t entirely agree with the new numbers because I don’t think they include [properties with tax] exemptions and because the percent increase in the median is not the same as the median percent increase, I appreciate the time and expense the administration went to to produce them. . . .  And I think their willingness to do so is a step in the right direction, towards an honest, civil public debate on the town’s financial status,” he wrote in an email.

“I’m very pleased to see the correction,” said Anne Musella via email. “Ms. Cienki has repeatedly expressed a goal of transparency with the public. I hope this will be just one of many steps in that direction, as many residents’ questions to the Town Council remain unanswered.”

While Cienki’s letter blames the erroneous number on former town administrators, multiple sources have told EG News that work on the brochure was rushed and Town Council members, including Cienki and Vice President Sean Todd, were closely involved in the numbers that appeared in the brochure. Additionally, informal council advisor Stuart Peterson was also involved, including attending an April meeting with town employees about the brochure as a surrogate for Cienki. Yet, in an audio recording from the Dec. 20 meeting, Peterson distanced himself from the brochure.

Quinn: But when you finished the flyer and you look at that first page and it says the median tax bill went up 51 percent and the line below that says the tax levy went up 15 percent . . . anybody with any numbers sense should have been able to look at that and said, wait a minute, something’s off there.

Peterson: I would have if I’d been a part of it. A red flag would have gone off with me.

Requests to Cienki for additional comment were not answered.