Chromebooks: How Paid For? Why Before All-Day K? 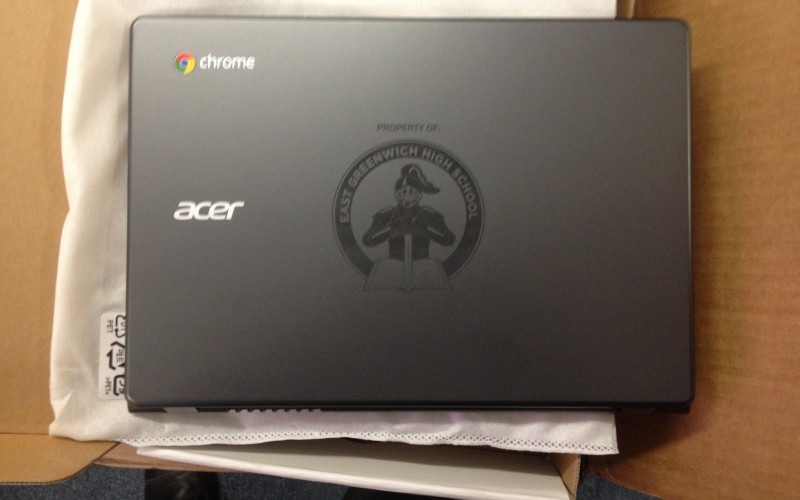 Some parents have raised questions over the Chromebook budget line item: Was that $60,000 coming out of the Technology Fund Balance being used to pay for repairs of uninsured devices? And, how did the high school get Chromebooks before all-day kindergarten was implemented?

With regard to repairs, the district has spent around $2,500 on repairs for uninsured Chromebooks, according to school officials. Supt. Victor Mercurio said the district was seeking reimbursement for the cost of those repairs.

When the implementation of Chromebooks was approved last spring, it was for a three-year lease plan at a cost of $110,000 a year. That figure was split between two parts of the overall EGSD budget, with some of the money coming from the Technology Fund Balance, a specific fund set up to pay for computer-type devices, and the rest coming from regular operating expenses.

According to the district’s technology integration specialist, Donna Wayles, less than 10 percent of Chromebooks have needed repair. Of those needing repair, she said, fewer than 1o have not been insured. The school district offering insurance on the devices at $31 for one year, $89 for three years (with no deductible).

Broken screens have been the biggest issue. Because they are touch screens, replacing them is expensive – $270, said Wayles. The total cost of a new Chromebook (without all the school district software) is just over $300.

Interestingly, nearly all the devices with broken screens did not have covers. Covers were an optional $30 purchase through the school or students could buy their own, or go without. Only one Chromebook with a cover has need a screen repair.

“Obviously, that’s pretty compelling evidence,” said Mercurio. “We need to look at that some more,” as to whether or not covers should be part of the Chromebook package. Currently, if a student with financial need wants a cover, the school refers them to outside entities for help. There is no mechanism in place to provide covers or insurance for students with financial need.

Because of the expense of repairing touch screens, Wayles said the plan for 1:1 implementation at Cole Middle School – which is pretty much off the table for next year’s budget – is to buy Chromebooks without them. The cost to repair a non-touch-screen device is $50 and can probably be done within the district.

“I don’t think it was purposeful to put one in front of the other,” Mercurio said. The then-School Committee voted 6-1 in favor of 1:1 at the high school a year ago, with Deidre Gifford casting the lone “no” vote.

The School Committee meets Tuesday night to continue discussions on the fiscal year 2016 budget; a vote is on the agenda.

And, if you want to keep reading news like this, consider supporting East Greenwich News by clicking here.