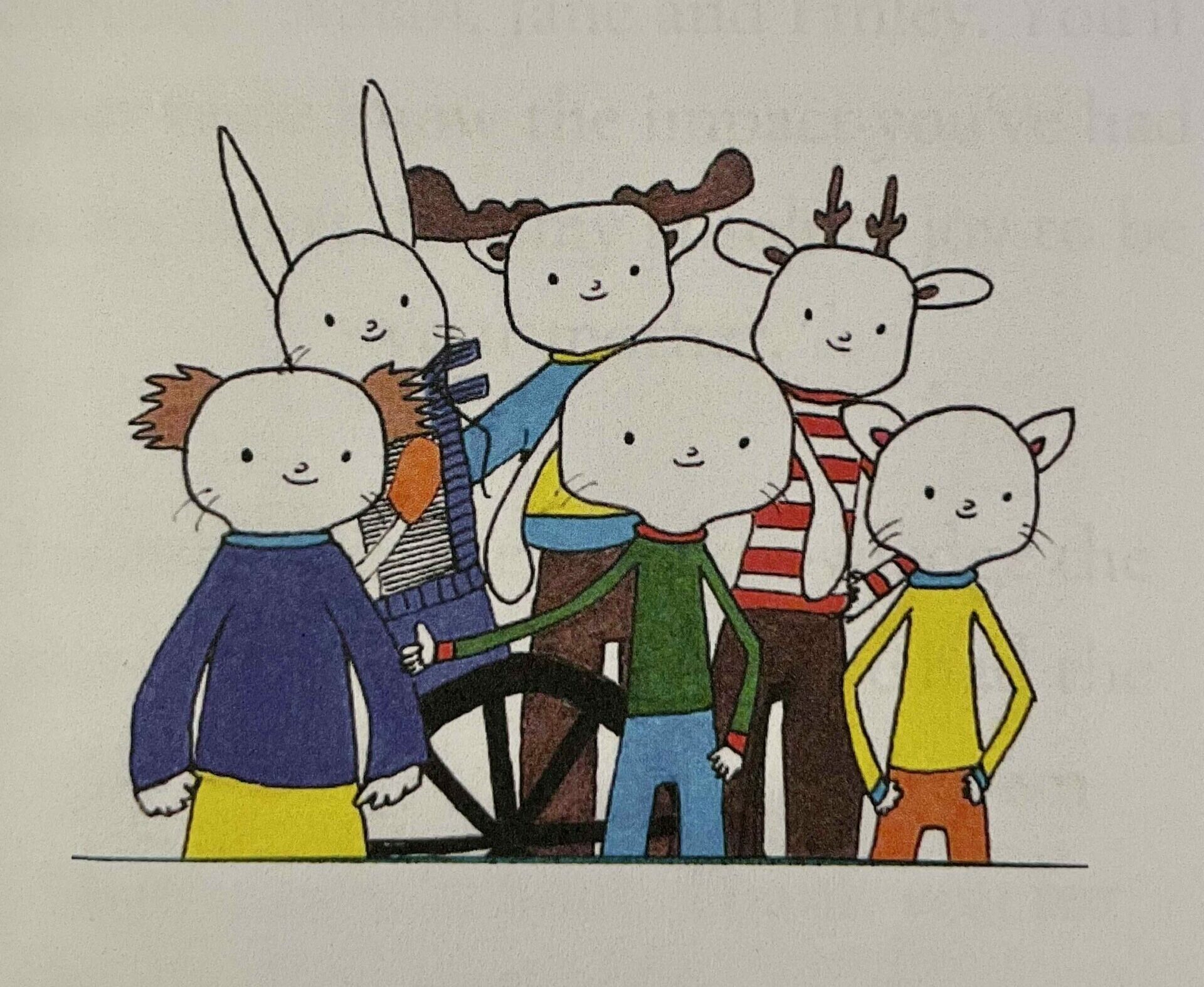 In Print and In P.E., Mrs. Carr Shines

There has been a constant reassuring and affirming presence at Frenchtown Elementary for the last 29 years in the strong, unassuming form of Physical Education teacher, Christine Carr. She first arrived at Frenchtown full of energy as a newly minted URI graduate, and seemingly little has changed as Carr has inspired and been inspired for the better part of the last three decades. She has made hundreds, if not thousands, of favorable impressions on those she has had the pleasure of teaching and working alongside. Life lessons of resilience, connection, not giving up, facing challenges head-on, and remaining open-minded taught through fitness and exercise are meant to stick with students well beyond their early elementary years.

To help her students understand and utilize skills learned in her class, Carr wrote and illustrated Corwin and Friends: We Can Do It, starring Corwin, a floppy-eared bunny, and his assorted long-legged animal friends. Together, the approachable characters impart wisdom learned through shared challenging experiences in their school’s Physical Education class, realizing they already have the skills to overcome difficult things, but the challenge is in using the right life tool, not the presenting situation itself. 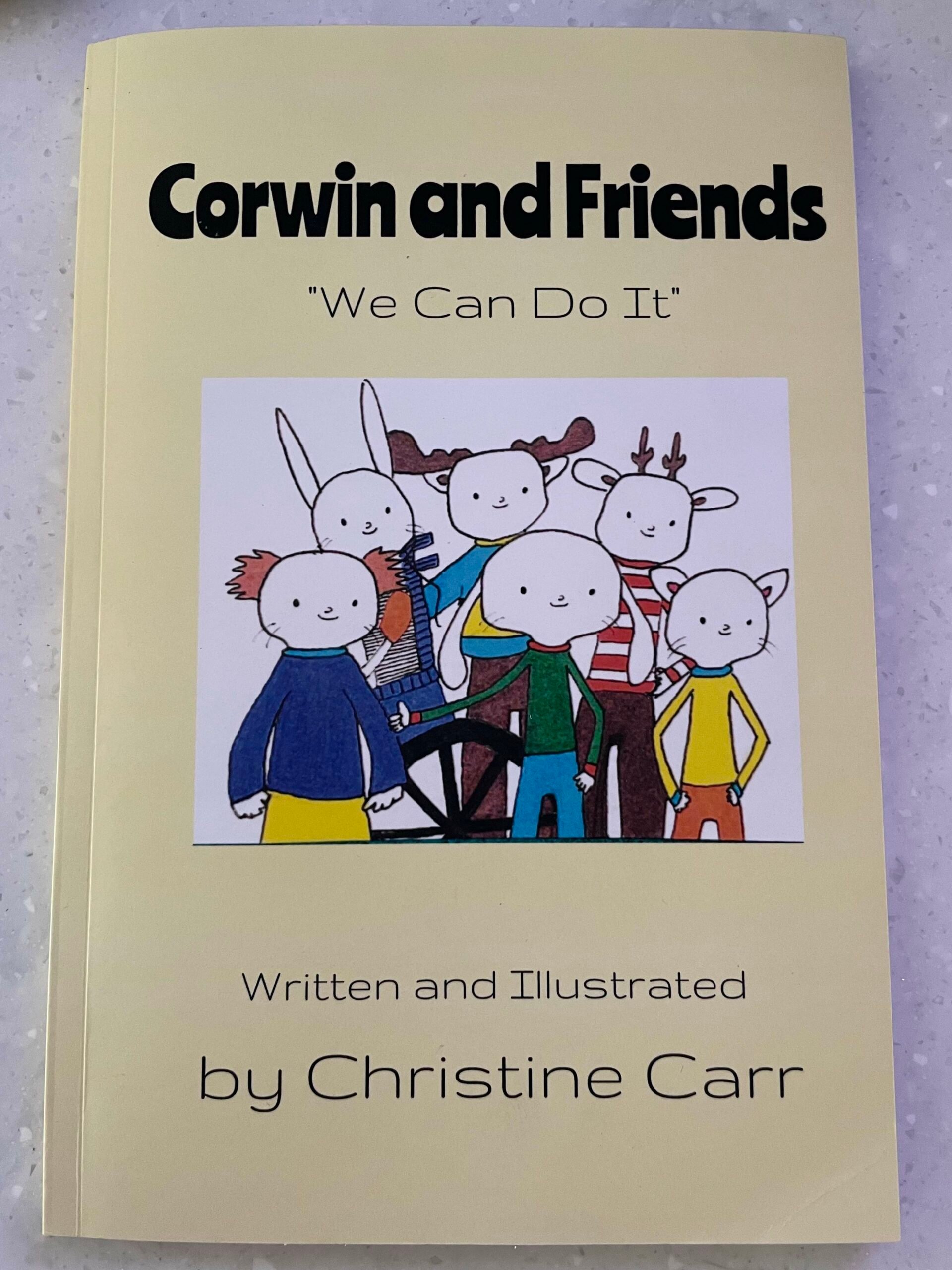 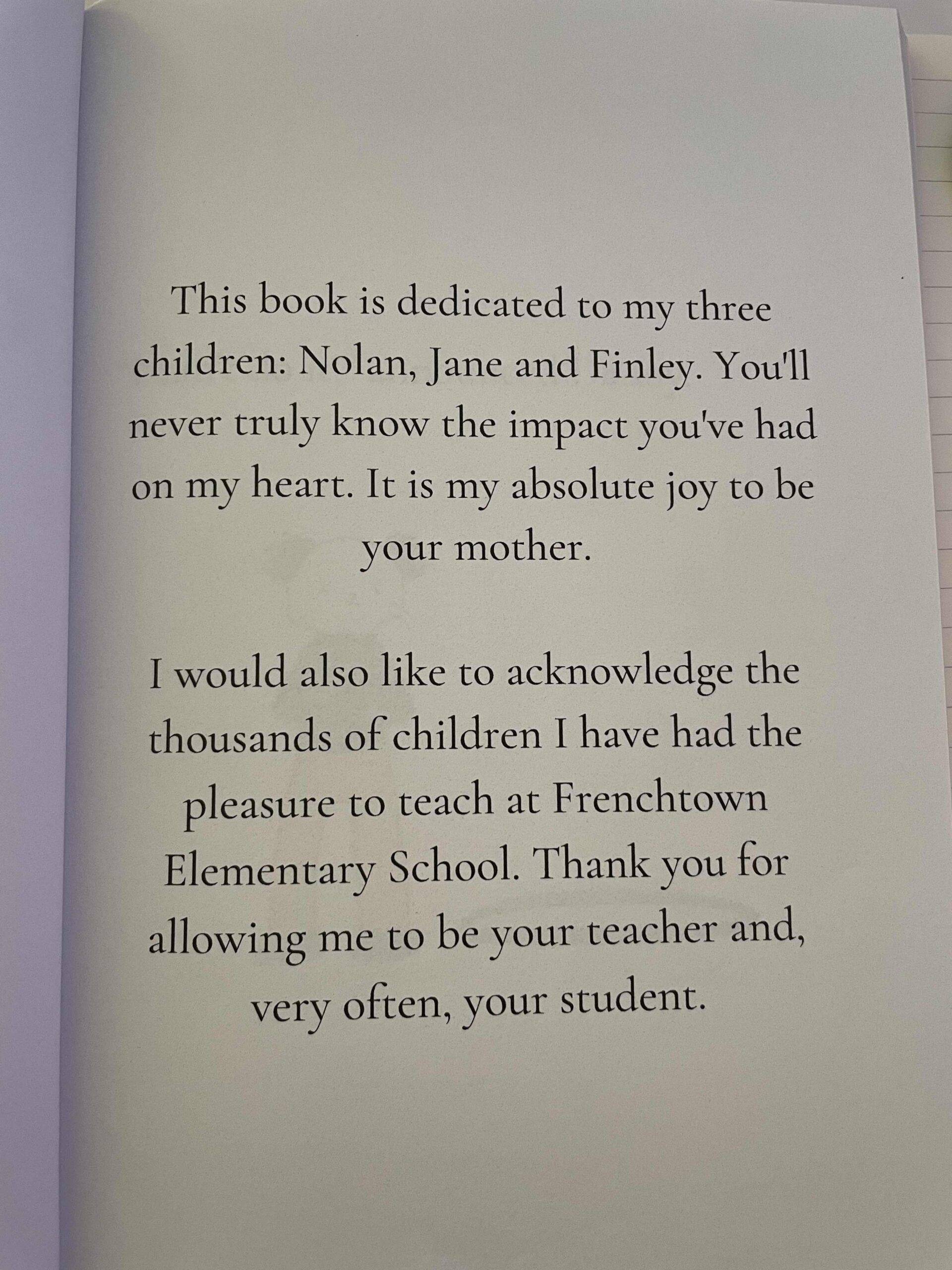 Many Corwin and Friends characters are named after wonderful educators and coaches from Carr’s own life that forever impacted her: there’s Mr. Campbell, a janitor in the story, named for Carr’s first basketball and softball coach as a kid that she remembers fondly; Mrs. Welsh, the story’s principal, is modeled for Carr’s own elementary school principal and who made a lasting impression in his willingness to engage with the kids on the softball field everyday at recess; Mrs. Gervais is named for Carr’s all-time favorite teacher in second grade.

A few years ago, Carr had received a present from her sister along with a note expressing hope that Carr would continue to develop her much-appreciated skills as an artist that were too often overshadowed by her propensity for athletics. Then, the 2020 Covid pandemic hit and upended everything. The abrupt change helped Carr make good use of the fine-tip markers and package of blank craft cards; she started sketching. Carr had no intention to do anything with her doodles other than to draw and color the cards as a personal and creative outlet, but good friends encouraged her to take it further after they saw some completed. Their encouragement made Carr question if it was time to face underlying fears that what she was doing might be silly, or not good enough if viewed more broadly, “We all need a nudge to get the ball rolling, and have to put in the work first to even get the nudge. I encourage my students day in and day out that they can be scared or nervous, but they can still do it. These sketches helped me to grow and overcome challenges in my own way too.”

“I’ve gotten so much feedback through Corwin and Friends that these characters are the bright spots in people’s days, that they’re really helping to instill the ‘believe in yourself’ mentality that’s at the core of everything I teach,” Carr shared. Carr is incredibly modest yet justifiably proud of the impact she’s making with her book and her drawings. Through her website ChrisCarrInk, on Facebook, and in several retail shops (including Bags by Iris and Heritage Glass & Gifts Studio in East Greenwich, Yes! Gallery and JW Graham in Wickford, The Purple Cow in Wakefield, Fuller Art and Frame Gallery in Jamestown, Gansett Goods and Crosswynds Traders in Narragansett, among others) Carr’s characters’ messages of resilience, determination, friendship, and open-mindedness are popular. They have also recently been purchased for posters for Boston Children’s Hospital, for positive messaging in local pediatricians offices, to complete summer packets for children for Family Services of RI, as a part of graduation gifts for Sweet Peas preschool graduates in EG,  and by educators in California to further the elementary-level social-emotional learning curricula in place there. 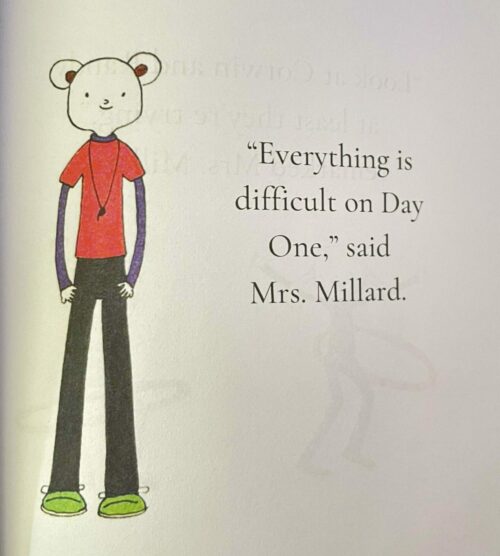 Carr’s passion for her off-shoot role as an author and illustrator is as genuine as her love for her career as a Physical Education instructor, and she’s always open to partnerships and collaboration with others to further the impact her positive messaging can make. Through a partnership with Anchor Paws, Carr donated proceeds of her retail items to pet adoption agencies. “Random Acts of Corwin” helped Carr to bring awareness to mental health concerns around the holidays last year, and she generously donated the proceeds of her sales to those that had expressed a need for help. She enjoyed collaborations with local Parent Teacher Groups while students were primarily learning in virtual environments, helping them have access to engaging, fun, and meaningful paper-based learning resources. Giving back to the community is another way Carr positively impacts those she touches.

Carr’s guidance from Stan Ruder, former owner of Allegra Printing in EG, helped to initially cull her early sketches down to 20 cards and 50 images fit for print. From there, help from other friends helped her to create a website and an online store to distribute the cards. Feedback from those that had received the cards or had sent them was wonderful; Carr heard that receiving them and sending them was more meaningful than texts, emails or other communications and that the adorable, relatable characters had staying power.

Corwin, whose name means “Heart’s Friend,” became a “Daily Doodle” shared on Carr’s Facebook page. The messaging morphed from cards to t-shirts, face masks, mugs, social-emotional coloring books to support school curricula, and more. “The pandemic was a time of great need for personal and emotional awareness,” said Carr, “especially amongst students as they coped with solidarity and uncertainty.” Recognition for Carr’s value as an artist, illustrator, and children’s educator includes recent orders by Hasbro Children’s Hospital in Providence for posters of Carr’s characters for  their pediatric cardiac ward. To say Carr’s skills beyond athletics have been tapped is an understatement, and one that likely makes her sister very proud, even if self-promotion through her writing and drawings still takes Carr out of her comfort zone.

While her foray into publishing and her path to become an artist and illustrator is marked with help and encouragement from friends and connections from the community along the way, it all started with daily inspiration from Carr’s students. Students like Isaiah, her wheelchair-bound former student who moved on to third grade at Eldredge this year, have overcome extraordinary challenges every day but rarely realize the extent of their own positive impact on peers and even educators. Corwin and Friends’ “Billy” is modeled after Isaiah, and is meant to show his appreciation and empathy for even simple or difficult moments despite his physical circumstances. Like Isaiah, Billy comes forward with wise words to share his perspective with other students, showing that lessons can be learned and modeled from unassuming teachers. Isaiah is genuinely appreciative of life’s smallest moments and models true empathy for others, a life skill Carr deemed worthy to emulate in her first book. Using a toolbox analogy, Carr helps children to understand they already have within themselves the skills to navigate challenges of any size, but accepting the circumstances, asking for help, and feeling uncomfortable are just steps along the way to overcoming it. 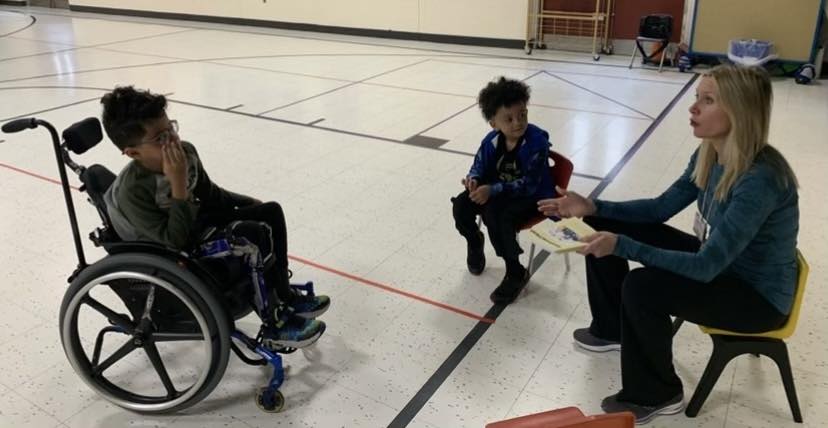 Christine Carr (R) sits with EG students Isaiah (L) and his younger brother, Bryson (Center), to present them with the book in which Isaiah is the inspiration of a prominent character.

My own 7-year-old son, Henry, is a current student of Carr’s at Frenchtown. When I shared with him that I would be writing a feature on the great things Mrs. Carr is up to outside of school, he was excited to help with the interview. Since we had already purchased the book, Henry was curious if Carr has future plans to make it a series, and if the hardest part about the endeavor was the writing of the story or the drawing of the pictures. Graciously and eagerly, Carr answered his questions: she would love to write more about Corwin and his friends. Perhaps a pre-quel about how Corwin became so wise, and what of his own life circumstances or experiences have helped him along the way will be next. Drawing the illustrations were the most fun for Carr, because the storyline was such a natural thing for her as it’s based on so much of her real-life daily experiences as an elementary school Physical Education teacher. And although Carr had fun creating the illustrations, it was frustrating at times because even the smallest slip of her marker outlining or coloring them in would send her back to step one – especially when it happened a few times in a row!

Carr has enjoyed the connections and reconnections that her experience writing, illustrating, and publishing have brought to her, and looks forward to any insight members of the community are able to bring forward for new directions for Corwin and Friends. Her friend recently digitized some of her cards and the book characters, which has left Carr looking inward, again quieting self-doubt, “Imagine you could help someone, but you were too afraid?” Carr’s hesitation to explore how her characters and their life lessons, applicable to children and adults, left me hopeful she will find a way.

Author’s Note: Carr will be hosting a talk about the messaging of friendship, overcoming challenges and fair play central to “Corwin and Friends: We Can Do It” on October 20 at 6:00 p.m. with the East Greenwich Parks and Recreation Department. It is free and all ages are welcome, but an RSVP is required HERE.