Charlie Preble Has Left The Building 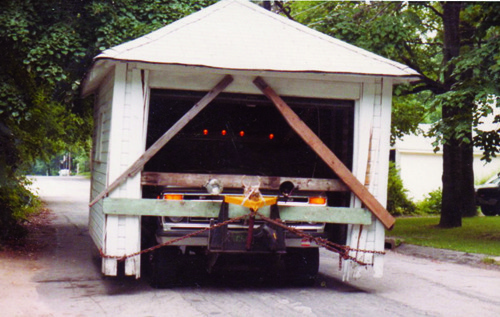 Photo Caption: If a picture is worth a thousand words, this picture is priceless. Charlie, inside the truck, driving the garage down Beachwood Drive on its way to a new home in North Kingstown on Sunday morning. Photo courtesy Kerri Preble Godfrey

October 14th was the third anniversary of Charlie Preble’s departure. This is a momentous occasion for a lot of us and it’s only proper that we have a moment of silence, a rare commodity when Charlie was with us. Some might even want to reread the eulogy I wrote for the occasion and remember this big doofus teddybear who was so much a part of our lives that we miss him still. This column, updated some, originally ran in the October 20, 2011, Pendulum:

Charlie Preble has left the building.

I was sitting in Dunkin’ Donuts a few years back when Charlie Preble pulled up a chair and asked me if I was interested in a broken iPhone he’d found. Charlie was a master accumulator. And then he told me he was going into the hospital the next day for minor surgery. That next day he died on the table and for many of us, the world will never be the same.

I have few heroes in my life. People who have earned my regard and respect, not for what they’ve done, but for who they are. Only four come to mind right now and Charlie was one of them. Charlie took up a lot of space. He had a lot of stuff. He had a lot of heart. He had a lot of conversation. He was a bit more than most.

Although in a coat and tie rather than the customary flannel shirt and camouflage workpants, here’s Charlie Preble as most of us will remember him. Photo courtesy Dave Daniels

He was a self-employed carpenter and handyman by trade and plowed snow in the winter. He drove big Ford pickup trucks. Charlie would buy a new F-250 pickup and begin denting it the next day. By the time a year had gone by, it was a total wreck. Then he’d feel right with it and use it for 10 more years. I recall the day after the Russell mansion at Goddard Park burned to the ground in the mid ’70s, Charlie was there tossing chimney bricks into the back of his brand new truck. I don’t think he ever accepted there might be limits on what he could get done. He would help anyone do anything and often for nothing more than a thanks.

When I had my office down at Quonset, they were clearing out Dogpatch, one of the old summer house areas by the water. There was a 1930s-era two-car garage due to be razed and I could have it if I got it out of there fast and didn’t leave a mess. I knew that this was a job for Charlie and he agreed to move it. It was much too wide to take along the road in one piece, the usual way Charlie moved garages around.

He first poured a foundation for the garage in my yard and then he attacked the garage itself. After tossing all the roof shingles into a dumpster, he color-coded the roof-boards with spray paint so he’d know where they went, and then took out each nail without destroying any of the boards. When he had the roof off, he disconnected the walls at the corners and laid them down. Gathering up some of his stronger buddies, he put all the pieces on a flatbed trailer and brought it up to my yard where he proceeded to reassemble it on the new foundation, a procedure the reverse of how he’d taken it apart. The end result, a great garage for a third of the cost of a new one and of superior materials, as far as I’m concerned.

There’s another, more legendary garage story told: Charlie was asked to move an old single-car garage from Potowomut to North Kingstown. His plan was to back his big pickup truck into the garage and, using jacks inside the truckbed, lift the building off the ground and drive it, truck inside, to its new location. For traffic reasons, he’d chosen early Sunday morning to do this, plus he probably didn’t have a permit. There probably is no permit procedure for this type of activity.

The story goes that he was driving the garage along the Potowomut Road when the overhead door came down and blocked his view of the road. He couldn’t get the truck’s door open enough to get out and while he was wriggling his way out of the window to get the garage door back up again, a cop drove by, saw the garage in the middle of the road, got out of his car, looked up under the garage and seeing Charlie, he walked back to his car shaking his head, not wanting to see, hear, or know anything about it. Reportedly, the rest of the trip went without a hitch. See the picture!

But that was Charlie, the ultimate handyman. The man you would call when no one else could, or often would, do it.

Sometimes affectionally known by friends as “Crazy Charlie,” he lasted a lot longer than some of us would have thought. There were accidents that would kill most of us but he survived them. Things like falling off a roof into a nest of hornets. One day at my house he walked under the ladder just as I dropped a hammer. Hit him square on the top of his hatless noodle. I know he saw stars. He just wobbled around cross-eyed a couple minutes rubbing the top of his head and then got back to business. He didn’t lose his temper. I don’t think anyone ever saw him lose his temper.

Charlie was one of those guys who come to mind when you think of the term “Yankee ingenuity.” He knew how to solve problems. He knew how to get things done and usually had the stuff to do it. Stuff? He had a yard full of stuff, vexing newer neighbors to the area. I once asked him if he had a couple of windows for a shed I was building, he came over with two brand-new casement windows that he’d found in a dumpster. Perfect. If you needed something, chances were he had it out in the yard there somewhere. Throwing potentially useful stuff away wasn’t part of his game plan.

He was also a great conversationalist. He was so good at it that you could interrupt him, yawn, you could even lay down and take a nap while he was talking and he still wouldn’t stop, obviously figuring you would pick it up again when you woke up. And he was the one who knew what was going on because he talked to everybody. He was news-central. There’s no telling how many conversations he would have in the course of a day.

Charlie was the oldest of five siblings and he kept his family together when their parents died while they were young. The brothers, Charlie, David and Rick, would meet and have breakfast mornings at Ed’s Roost restaurant for years, their trucks lined up in the street. Brother David stretched the funeral parlor walls a few months earlier and a great line formed to say goodbye to Charlie too.

Charlie and his wife May were married for 40 years. I remember one day a long time ago when I was shopping down at the Zayre store when it was on Frenchtown Road. Charlie walked by and told me that he was getting married. I joked, “Who would marry you?” He was elated and went on to explain that, as odd as that might seem, he had found someone and sure enough, he and May were married shortly thereafter. They have daughter Kerri, now Mrs. David Godfrey, and the Godfreys have two children. It is indeed a shame that they will not know this wonderful, crazy guy who was their grandfather.

This loss is immeasurable. There are no more Charlie Prebles out there. The earth quivered a bit the day he died, things got quiet, never to get quite so noisy or interesting again. Charlie Preble has left the building.