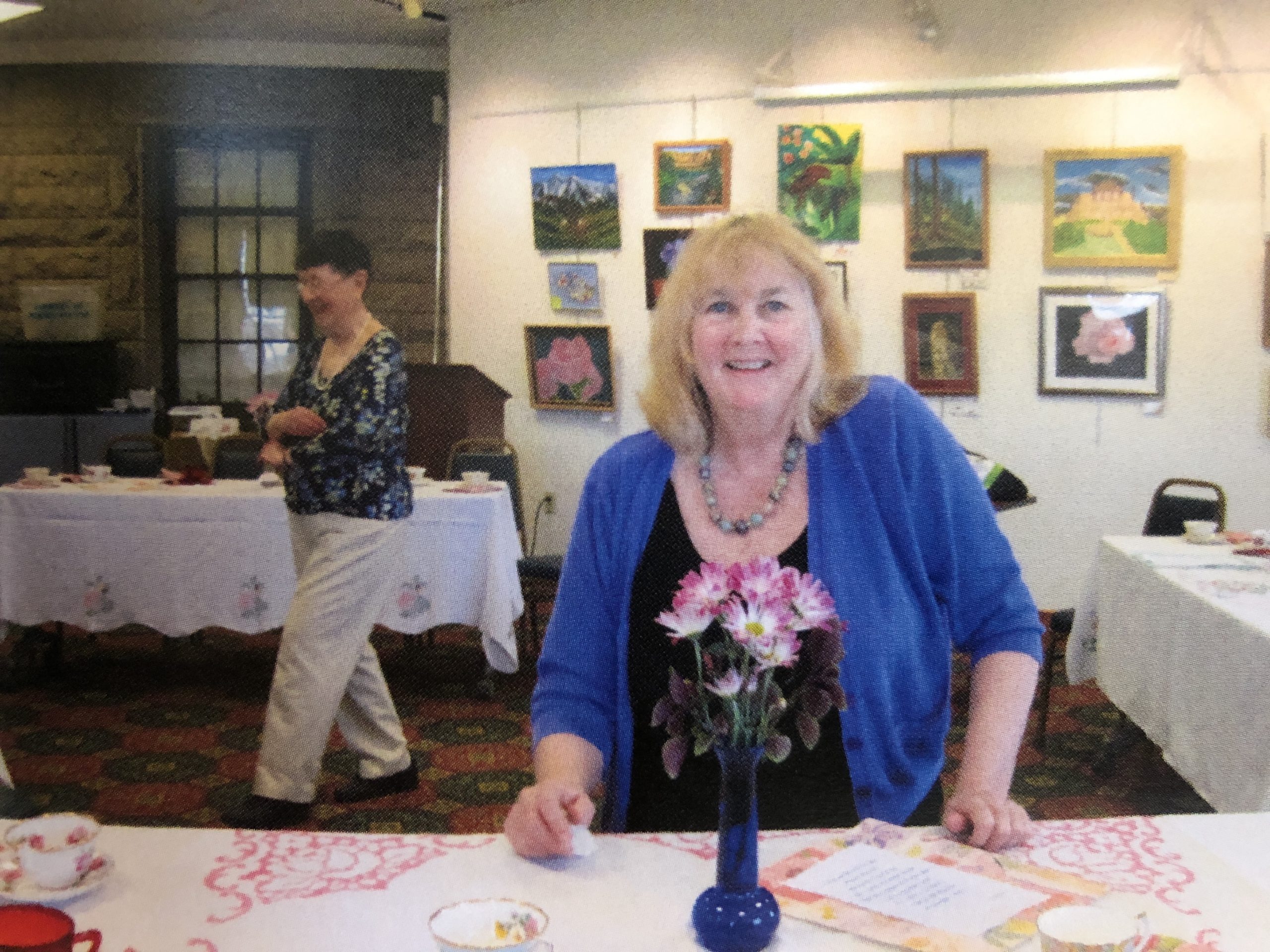 Karen Taylor got into library science after a stint working on a political campaign in Albany, N.Y. after college. She thought she’d wanted to go into politics but she was discouraged by what she saw as a lack of information when it came to issues during her time in Albany. She pulled the plug on her brief political career and went back to school at URI for a master’s degree in library science.

Karen Taylor with Girl Scouts circa the 1980s.

“People need information before they can act on anything,” she said from her home in East Greenwich recently. Libraries provide that. Taylor said working the reference desk in the days before Google was exciting. “So many questions every day about all kinds of things!”

Someone might ask about the difference between front wheel drive and rear wheel drive, or when’s the best time to plant pumpkin seeds, or who were Rhode Island’s senators in 1926 (Peter Gerry and Jesse Metcalf, fyi)? Of course, today we have all those answers and a million others at our fingertips but not all that long ago, many people relied on librarians to find the answers.

Taylor came to the EG Free Library in 1980, as assistant director and children’s librarian, but within two years, Director Peter Fuller left and Taylor moved into the top spot, a job she held until a couple of months ago.

Her replacement, Adrienne Girard, started Monday. More on Girard in a minute. Let’s first consider some of the highlights of Taylor’s tenure.

Pirate Taylor with the Cat in the Hat, at a town parade a few years ago.

For many years, the challenge for the EG Free Library was its quirky location. When most of the town’s residents lived in or near downtown, the Peirce Street building was handy. Many patrons walked to the library. But as the townspeople spread out and the population grew – primarily in the 1960s and 1970s – there seemed to be a need for a modern facility with ample parking. By the 1980s, the search for a new location was on.

Taylor said they considered several locations, including the site of the old East Greenwich Dairy, across from Bostitch on South County Trail. They settled on the southwest corner of Cedar and Post roads, a vacant lot, to build a modern structure with plenty of parking. The town decided against a new building and it was back to the drawing board. (Later, the EG Fire District tried to get that land for a new fire station. Again, no go. Native American remains were found on the site and it remains open – probably unbuildable – land).

It was back to the drawing board for library officials. During the ‘90s, both the upstairs and downstairs were renovated but space remained tight. Finally, in the early 2000s, the library raised enough money to put on an addition. The result was the larger space we all know today.

Karen Taylor saw one more significant change to the building and that was in 2015, with a renovation that included a “reading terrace,” so you could enjoy the library even when it wasn’t open.

Taylor said now she’s glad the library stayed downtown. “It’s very important to be in the center of the community – to be accessible to people without cars,” she said. “The site is tough but I think we did a beautiful job. The building – I love it.”

Like the good librarian she is, Taylor, who lives in East Greenwich, said she’s looking forward to reading more in her retirement. Her favorites: thrillers, mysteries and beach reads. See you in the stacks, Karen! Thanks for everything.

Adrienne Girard comes to the East Greenwich Free Library by way of Cranston, most recently from the lovely William Hall Library on Broad Street. Gallo brings with her a boatload of enthusiasm and a passion for libraries.

“I felt this was a once-in-a-career opportunity,” Girard said. “These [positions] don’t come by very often.”

She acknowledged the vast changes that have swept the library scene in recent decades.

To that end, Girard envisions getting more computers for the library. She also sees offering do-it-yourself-type classes and other activities.

“Libraries aren’t just places where you go and get a book and go home,” she said. “They are community centers where people connect.”

At the Hall Library, there were concerts on the lawn and they held ping pong nights. Maybe those aren’t what the EG Free Library can offer but there are other ideas, Girard said, like dessert nights for EG business owners or smaller music performances.

“Obviously, when we can all be together again,” she said, referring to the COVID-19 restrictions.

The goal, she said, is to get adults and children excited about the library. “Libraries are open and they’re going strong and we have a lot to offer,” she said. “I can’t wait to meet people and get to know them and find out what their goals are and what they would like to do.”

During the COVID crisis, EG Free Library hours are limited and visits are only to return or check out books. Mondays and Fridays, 10 to 2; Tuesday through Thursday 10 to 5.