Catch ‘Cinderella’ This Weekend at EGHS 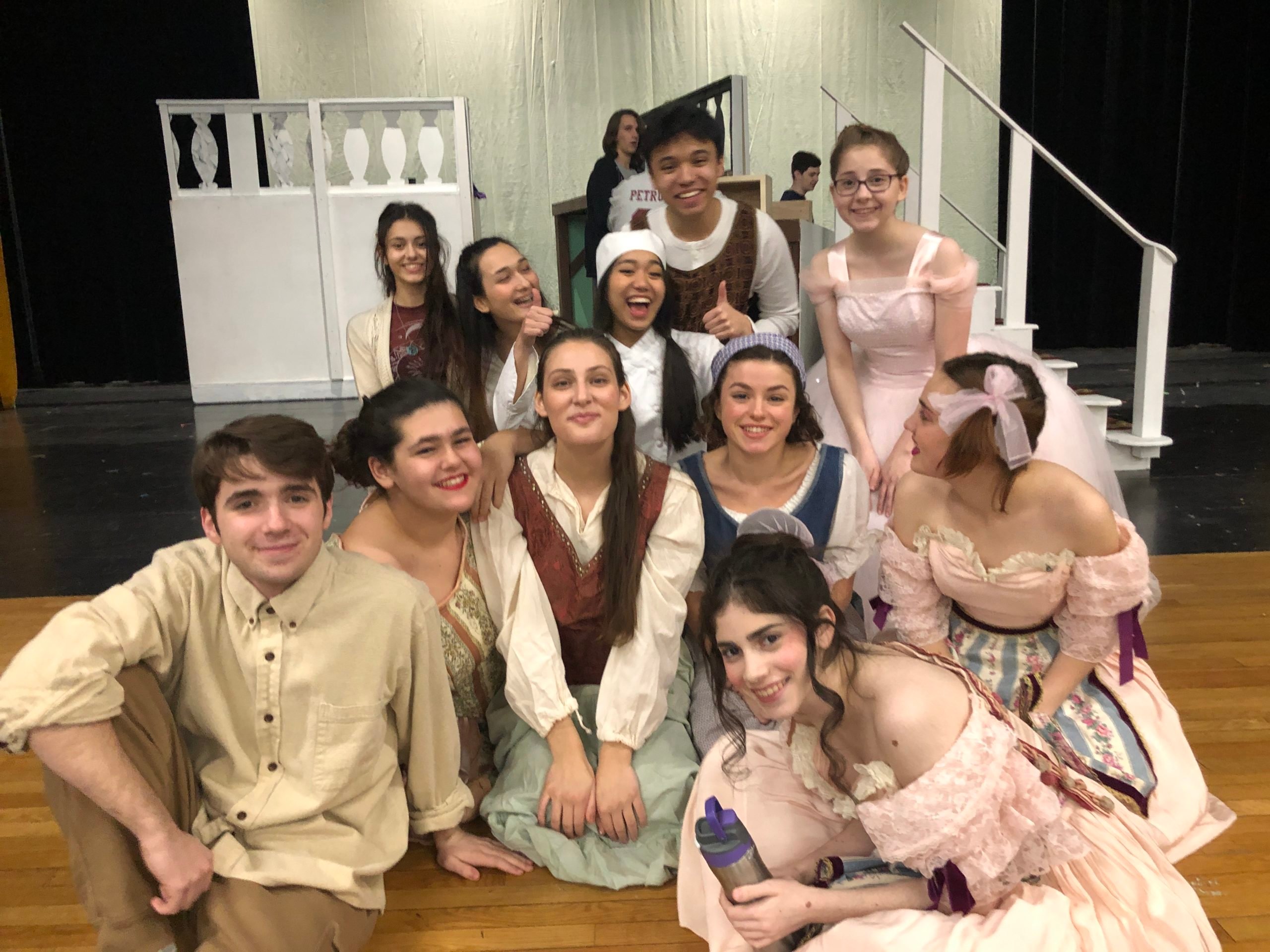 The EGHS Drama Club presents Rodgers and Hammerstein’s “Cinderella” Thursday through Saturday (Jan. 9-11) in the auditorium at East Greenwich High School. This version is known as the “Enchanted” edition, based on the 1997 TV movie with Whitney Houston, Brandy, and Whoopi Goldberg.

“It has more of a modern swing to it,” Jack Larson, one of the two Prince Charmings, explained Monday before rehearsal. “It’s a good contrast to last year,” said Noelle Salisbury, one of the two Cinderellas. Last year, they put on “Newsies,” a very physical musical with lots of dancing. “This play has more classic charm,” Salisbury said. “It’s just magical,” said Jackson Morin, Prince Charming #2.

Lily Mollicone said for her one big difference this year: she’s not playing a 9-year-old boy. Indeed, Mollicone is playing the other Cinderella.

It’s not just the leads that are double cast – all speaking parts are. That makes it a little more complicated for the tech crew, but for longtime director Rob Petrucci, it’s a great way to involve as many students as possible.

More than 100 high schoolers are participating in the production in some way: performers, musicians and tech, making it the largest club in the school. Petrucci, who’s been directing EGHS productions for the past 18 years, is happy to juggle the large numbers.

“Our feeling is that if a student wants to be on the stage, they should be able to,” he said. “I love the fact that there is an opportunity for all students to be involved,” he said. “These kids are all grade levels. We’re all just one big family.”

He isn’t the only one who feels that way.

“You build a bit of a family,” said Rylie Paull, a senior who’s been part of the tech crew for the past three years. “To be part of something so big is fulfilling.”

Joe Kulik and Alexandra Russo, other senior members of the tech crew, agreed. “It’s a lot of work but it’s a lot of fun,” said Kulik. Chris Teng, a senior, is playing the synthesized oboe using a keyboard and his computer, part of the production’s 18-piece orchestra.

This is the first production for junior Josh Land, who’s playing one of the two kings. “My friend told me I should try out because I can sing.” He said he was surprised to land the role of the king, but was having a great time.

Some of those involved are parents helping pull together props, including Jenny Souther, the mastermind behind the largest of the props: a gorgeous pumpkin carriage. Souther first started helping out with props when her daughter was at Cole. Today, her daughter’s a junior and no longer involved in theater but Souther is. She built the carriage with help from Matt Salisbury, whose wife, Danielle, is also involved with props. They have two children in the program (including Cinderella Noelle).

Danielle Salisbury also heads EG’s Cultural Organization for the Arts (COA) which raises money to support art programs for students. COA has contributed to the high school production every since at least 2000, she said. This year, COA gave the club $1,000 for the production. In addition to parent volunteers, the EGHS Drama Club has another secret weapon: alumni talent. School music director Brendan Carniaux; tech adviser Mike Hyde; and choreographer Mimi Scheff all graduated from EGHS. Hyde has been volunteering his services to the productions since he graduated in 1984 (!). Scheff has been doing it since she graduated in 2011. Scheff was part of Hyde’s tech crew during her years at EGHS.

“Every year it feels like a family,” said Scheff. That word again.

Performances are Thursday, Friday and Saturday evenings at 7 p.m. and a Saturday matinee, 1 p.m. Tickets are $12 before Thursday (at EGHS or from a member of the cast or crew); $15 at the door.