Caring to Make a Difference 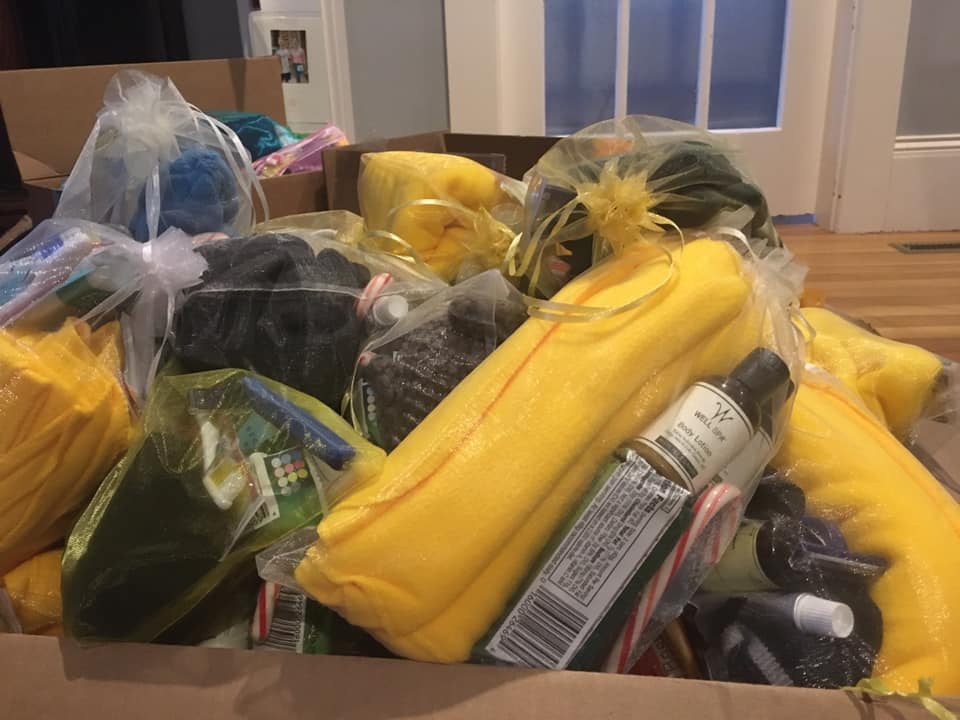 The kids arrive at Amos House with their care packages.

It’s two days after Christmas. Most of us are still digging out from the annual food-and-present barrage. Or taking in the latest Star Wars movie, or hunting down some post-holiday bargains.

But a collection of kids from East Greenwich, Warwick and Barrington spent their afternoon Friday at Amos House, a social service agency in Providence with the largest soup kitchen in the state, distributing 100 care packages they’d put together.

The idea was born a couple summers ago, when Lily and Emma Stark of East Greenwich, and their friends Ava and Isabella Hentz of Barrington and Lily Lockhart of Warwick, decided they wanted to make care packages to help people in need after a trip to New York City, where they saw a number of people living on the streets.

They thought, instead of giving people some of their spare change, wouldn’t it be great to be able to hand them a care package with a bunch of things they could use, like toiletries and socks.

The girls, together with siblings and other friends, have delivered care packages four times so far, including the Dec. 27 run to Amos House.

They’ve been raising money through lemonade stands and baked good sales as well as donations of goods or cash from supporters. At the Veterans Day Parade in November, they raised $137 selling baked goods. Turns out, people are happy to give a little more when they hear what the money’s going to be used for.

There has been a learning curve when it comes to the actual care packages. The first trip, up to Crossroads in Providence, they bought fleece blankets and other things, putting together six really nice care packages. But with only six bags to distribute, the visit was over before it began. They decided they’d rather help a larger number of people, which meant paring down the contents. The 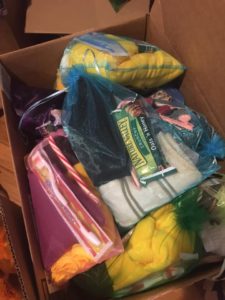 Some of the care packages.

next run they had toiletries for 150 bags and they went to Atria Bay Spring Village in Barrington, where the residents helped the youths prepare the packages. No socks in those bags, though. Couldn’t afford them.

For the trip this week, they decided on 100 bags, each containing a toothbrush, toothpaste, soap, shampoo and conditioner, a razer, deodorant, sanitizing wipes, a pair of socks, a granola bar and a candy cane (‘tis the season). Each bag also contained a hat, a scarf or gloves, and women’s bags got a few tampons. They also brought a few bags for children.

Lily Stark, a freshman at EGHS, said she only worried the clients would feel like the kids were looking down at them. “We just want to help,” she said. “Most of the people are awesome and thankful.”

“It’s been as good for us as it has been for them,” she added. “We get to see their reactions.”

Other helpers on the Dec. 27 run were Lily’s brother, George; Nat and Atticus Thompson, Lily Lockhart’s brother, JP, and the drivers, Kristie Stark and Jeff Lockhart.

The group has a website, NewEnglandCarePackages.Weebly.com and you can find them on Instagram too (@necp2019). If you are interested in donating or joining their effort, you can reach them at [email protected].

If you like reading about the people of East Greenwich, consider supporting East Greenwich News. We are a 501(c)(3) nonprofit and donations help us keep reporting the news. Use the Donate button below or send a check to EG News, 18 Prospect St., East Greenwich, RI 02818. And, thanks!