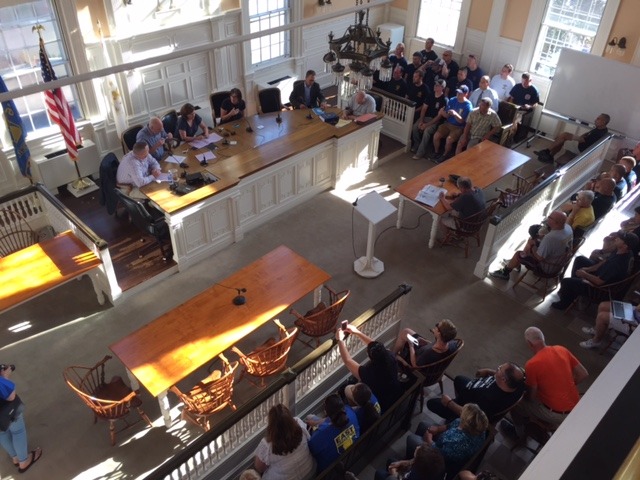 The Town Council voted 4-0 to appoint Captain Thomas Mears as acting fire chief in an unusual Saturday morning meeting at Town Hall that was filled to overflowing. The action ends three days of fierce speculation and uncertainty over just who Town Manager Gayle Corrigan was planning to recommend to the Town Council.

During the brief meeting, Councilman Mark Schwager questioned the necessity of the meeting. Fire Chief Russ McGillivray went out on a medical leave Thursday (8/17) and had named Mears to cover for him during his absence, something he had done several times before, both he and Mears confirmed Saturday. 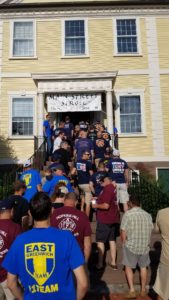 Firefighters and others arrive for the Town Council’s early morning meeting Saturday to name an acting fire chief.

“The reason this meeting was necessary is because according to our charter, the town manager shall, it’s not a “may,” it’s not a “can,” it’s “shall” make a recommendation to the Town Council when the fire chief is out on a disability,” Town Council President Sue Cienki responded.

Cienki said McGillivray had recommended Mears for the job.

“All we’re doing is confirming his recommendation,” she said.

“By putting out an agenda and calling a Saturday morning meeting, you’ve created a tremendous amount of anxiety and insecurity,” Schwager said. “The chief is due to be back to two weeks. The charter calls for an appointment only in the event of an extended absence.”

The clause in the Charter reads: “In case of the extended absence or disability of the Fire Chief, the Town Manager shall appoint an Acting Fire Chief with the approval of the Town Council.”

After the meeting, Capt. Mears (the now acting fire chief) said he had not been told he was the person the Town Council was appointing and had never met or spoken with Town Manager Corrigan. On duty at the Fire Department Saturday morning, Mears had arrived at Town Hall only minutes before the meeting having been called there because of possible overcrowding. He said he had covered for Chief McGillivray perhaps 10 times in the past.

“I wasn’t sure what exactly was going on,” Cienki said after the Saturday morning meeting. She said the meeting needed to be held and that it “was not trolling of the fire department.”