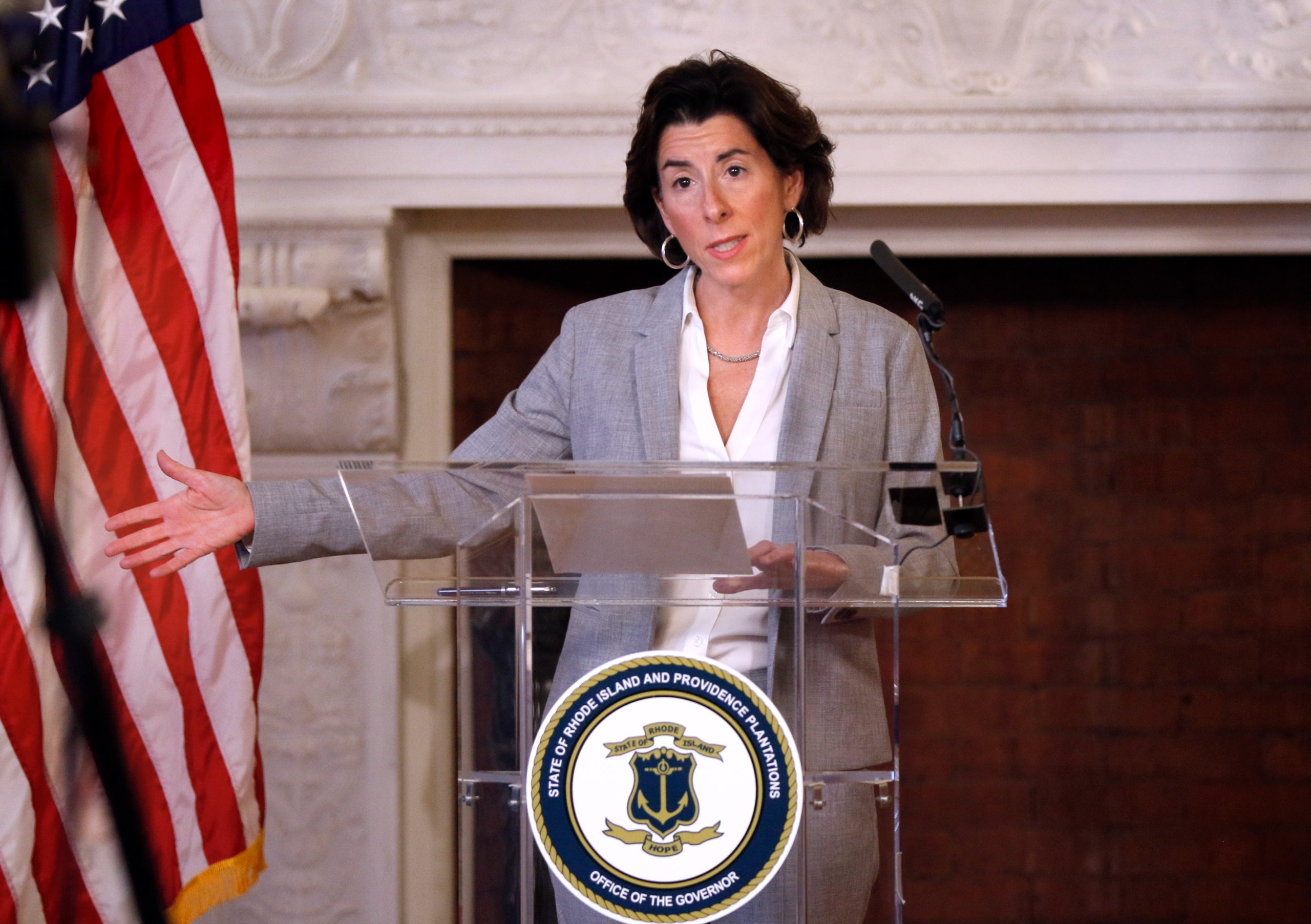 COVID-19 numbers Wednesday showed increases, with 321 new coronavirus cases (from 218 Tuesday) and 12 deaths (up from 6 Tuesday). There were also more tests 2,472 versus 1,808 Tuesday. The number of confirmed cases in East Greenwich remains at 38. The people who died were primarily in their 70s, 80s, and 90s. Hospital

numbers remain stable. Gov. Gina Raimondo said Wednesday she thought the state was at its peak and was plateauing. “It doesn’t mean we’re out of the woods,” she said. “If our numbers continue to look like this, flat or lower, then it is my plan to reopen May 9.” You can find all the data at the DOH website HERE.

At her daily COVID-19 new conference Wednesday, Gov. Gina Raimondo announced there would be no large gatherings this summer.

The governor did say it was possible there could be weddings in August – “but I can’t promise you that now.”

She said one of the main reasons for her action was because she really wants school to be able to resume in the fall. To that end, the Town of East Greenwich cancelled its Memorial Day parade a few days ago.

Immediately, festival organizers were reaching out to ticket holders, explaining the cancellation and asking patrons to consider donating their ticket money to the organization.

“It is with the heaviest of hearts we announce the cancellation of the 2020 Newport Folk Festival. As devastating as it is to write those words, it’s balanced with a renewed sense of, well, HOPE. It’s Rhode Island’s motto for good reason and it’s also the feeling you, our festival family, constantly exudes when we come together in good times and perhaps more importantly, in difficult times as well.”

While the festival is offering full refunds, Sweet said he hoped patrons would consider donating their tickets.

Raimondo also offered a broad outline Wednesday of how federal stimulus money would be spent.

“In a state the size of Rhode Island, $1.5 billion will go a long way. I will say, we will need every penny of it,” she said, praising U.S. Senators Jack Reed and Sheldon Whitehouse and Representatives Jim Langevin and David Cicilline.

Among the recipients for the stimulus dollars are nursing homes and other communal living settings already. Going forward, she envisions money to stabilize hospitals, cover overtime and out-of-pocket COVID-19-related public safety expenses, and help offset the losses faced by municipalities, something Town Manager Andrew Nota said Wednesday he was happy to hear.

“Rhode Island cities and towns appreciate the recognition that the governor has publicly acknowledged as to the critical role that Rhode Island’s cities and towns will play in the recovery of the state,” Nota said. “The funding of education, appropriated and pass-through state aid all represent priorities for each city and town, as we anticipate seeing an erosion of various other forms of revenues and an impact to our tax collection efforts in the coming year.”

Nota added, “Today’s comments represent hope for Rhode Island’s cities and towns, our municipal employees, local businesses, relief for our residents, and support to preserve our way of life and the unique character of each of our individual communities.”

Gov. Raimondo’s press conference Thursday will be for children. It will begin at 1 p.m. You can find a link to the live feed HERE.