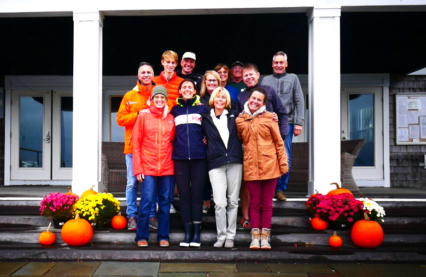 Above: Cally Duncan, second from the left in front, and EG friends at the boatyard in Noank before she headed south.

This is the second part of a two-part story. Find Part One HERE.

In February 2020, Cally Duncan and a friend set sail from Australia on the friend’s catamaran. They planned to sail the Pacific. Then COVID hit. Out in the middle of the Pacific Ocean, however, with just a satellite phone to connect with the world, it was hard for the sailors to understand what was happening. 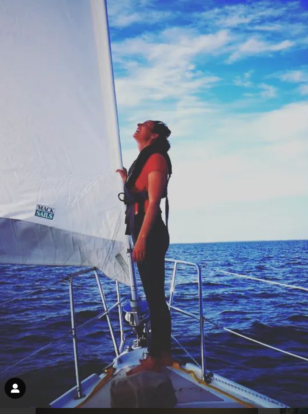 “Covid hit 3 days in, so for 28 days we were wondering what the heck was going on with the world only getting snippets of news over the sat phone,” Duncan said. She ended up being evacuated by the embassy from French Polynesia and spent the next 11 months in Alberta, Canada, with her parents. Ironically, that is where she became an Australian citizen – in her parents’ backyard, via Zoom. She used the time to save up some money – she has a few bookkeeping clients she’s able to keep working with thanks to the magic of the internet.

“It was really great to spend that time with my family after seven years away,” said Duncan.

Last April, Duncan signed on to help friends from Australia (a family of five, including three kids under age 12) sail from the Azores to Gibraltar. While in Spain she started looking for a boat of her own to buy – it turned out all the boats she was interested in happened to be in New England.

“Why am I sitting in Spain looking at boats in Connecticut?” she said, deciding to return once again to East Greenwich.

Getting into the U.S., however, proved impossible.

Duncan flew from Spain to Boston (via Germany), only to be denied entry to the country at Logan Airport because at the time, the U.S. did not have a travel agreement with Spain.

“Even though I had called border patrol ahead of time and got the okay with my paperwork,” she said. They deported her back to Frankfurt (where she’d picked up that connection flight) but once there, she was deported to Canada since she was no longer qualified for doing essential work (aka delivering a boat). But they didn’t send her to Alberta. Instead, she was sent to Montreal. Where she didn’t live and had no family and was required to quarantine for two weeks. Fortunately, family friends had an apartment there she was able to use. Eventually, she got a flight back to Alberta. By August, she was ready to try again to get to East Greenwich.

This time, it was Carolyn and Ed Cure (other Hill neighbors) and their son, Tim, who offered her a place to stay.

“Tim asked me what I thought their relationship would be like and I said it would probably be like having an older sister which he really embraced because he always wanted a sibling,” said Carolyn. Tim is a senior at EGHS (and an avid sailor, as is the whole Cure family). “They bonded really well.”

Carolyn had liked Duncan when she met her four years earlier – the Australian-Canadian’s particular magic was not lost on Carolyn.

“When we met her four years ago, I immediately recognized something in her that I liked and respected. I also thought, who is this young woman from Australia who brought me closer to people on my own street? I didn’t know the Bialys well, and didn’t know the Shoers at all…. It was because of her I got to know my neighbors better.”

Carolyn also liked the idea of being able to help a sister sailor.

“There’s also a long tradition of sailors needing a place to stay when in town not on their boats and people using their personal networks to help with that so I liked honoring that tradition as well,” she said.

But even Duncan’s trip from Alberta to Rhode Island proved a challenge, with delays and cancelled flights. By the time she arrived at the Cures’ Spring Street house, it was 3 a.m., Aug. 3. As tired as she was, Duncan noticed the “welcome back” balloons flying from the fence, courtesy of Cindy Bialy.

As the Bialys had learned in 2017, Duncan was an easy guest.

“It was like coming home to a favorite roommate who was consistently cheerful, helpful and grateful. She helped out by doing any chores around the house, grocery shopped and made dinner frequently,” Carolyn said.

Duncan found a sailboat in Connecticut, a 1981 38-foot Erickson. Naturally, the boat presented more kismet. It was owned by a New Zealand couple and they were thrilled when they learned of Duncan’s plan to eventually bring the boat back “down under.”

“This is my dream boat,” she said of the boat she’s christened Tala. In naming the boat, she said, “I wanted a throwback to the New Zealand heritage of the boat and Tala means ‘story’ in Maori – since it’s a bit of a story how I even came to live on a boat and to Rhode Island, etc.”

“I know I can handle that size of a boat,” Duncan said.

Which is a good thing because this is to be her voyage.

“Last time [in 2018] was a bit of a bath of fire … learning weather, customs, paperwork … I’ve learned a lot of hard lessons,” she said. “The next challenge is doing it on my own.” But, she added, the new boat has a spare room for a reason – she’s happy to have company. So it was that Carolyn joined Cally on the second leg of her journey, sailing from New Haven, Conn., to New York City. 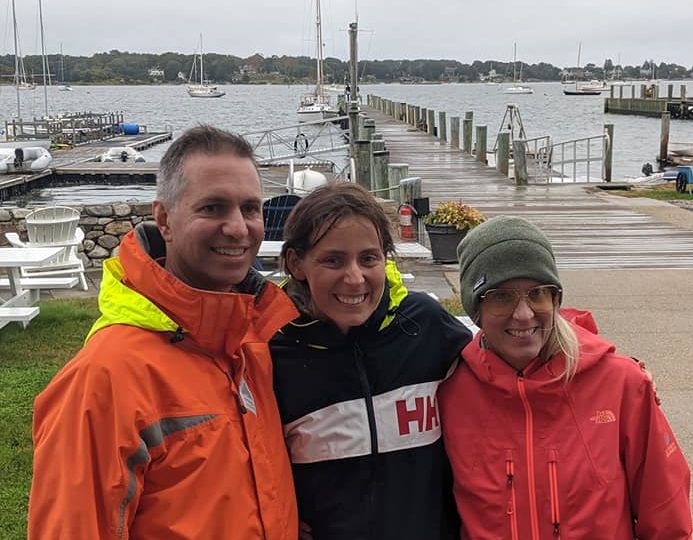 The Cures, the Bialys and several other local friends were in Noank, Conn., to see Duncan off. She sailed to New Haven – docking on her own for the first time – picked up Carolyn and they set off for the Big Apple.

Carolyn took the story from there: “We woke up at 5 a.m. in Port Washington to get to the ‘staging area’ by Hell Gate where there are usually other boats waiting to make the trip as well. Luckily there were just a few fishermen as we caught the sunrise and timed it within two minutes of our goal. It was magical passing through as the sun was rising and commuter traffic was just under way. We were carefully watching all the buoys to stay in the channel and out of the way of commuter ferries which do not move for anyone. Being on a sailboat surrounded by skyscrapers and huge tankers is a little intimidating…. Seeing the Statue of Liberty come into view around a corner of the river was a great relief, that yes, we’re going in the right direction and are going to be okay.”

Now Duncan has to get to south Florida before her visa runs out Jan. 31.

“I need to cover nearly 1,000 nautical miles – and that is as the crow flies,” she said. “There are a lot more miles when you add in the in-and-out of anchorages and following the coastline and I can only do about 60 miles/per day in daylight hours when I am on my own.”

And maybe no miles at all on stormy or blustery days.

But this is the challenge Duncan was looking for. While doing something she loves.

Where to from Florida?

“I did enjoy the Bahamas and Saba a lot in the Caribbean, but I never got to see Antigua and Barbuda or St. Lucia or St. Vincent and the Grenadines, which are all high on my list,” she said.

But the places she’s most eager to see will come later – Tonga, French Polynesia and Galapagos.

It’s all before her.

Happy sailing, Cally! May you have fair winds and following seas.