Earlier this month, I joined my son, James, at Camp Wannagoagain (say that name aloud … get it?). This was James’s third year at the camp, which is run by the Autism Project. James has Down syndrome but also some autistic tendencies and before Camp Wannagoagain, he’d never been to summer camp. 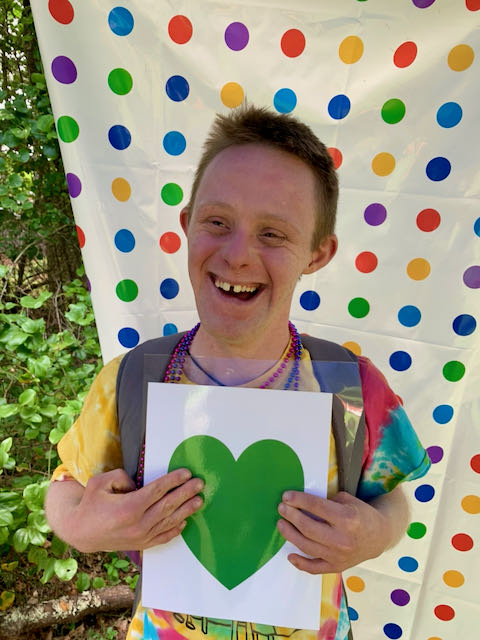 “This camp gives the campers the experience other kids have but in a supportive way so they can be successful,” explained Executive Director Joanne Quinn. “For a lot of our campers, this is the last chance camp. Other camps don’t have the staff or the know-how to do this. A lot of our staff work with these kids with our groups or in school during the year and they know them.”

It makes a difference.

The staff know how to bring the best out in their campers, as well as understanding how to anticipate when a camper might feel challenged or out of control.

Campers are divided into teams, which are color-coded in matching t-shirts as they walk across Camp Hoffman in South Kingstown, the site of the camp this year.

The first week of camp is open to those with better verbal skills.

“Especially for our first-week campers who are more verbal, they can be themselves. They can come to camp at 14 years old with cat ears on with glitter everywhere and everybody says, ‘Oh my gosh, look at you!’” – instead of how they might be treated at school or in groups with more typical kids.

James attended during week two, where the campers need more one-on-one support, which was why I was there for two of the days. Staffing was difficult this year and we signed James up late. They were happy to have him, but we needed to supply that one-on-one.

Yet, James’s team – tie dye – had some peer campers who provided James with enough fun and attention, and I was able to step back and watch. Marvel, actually — at the joy. There’s the camper who repeatedly calls to a staffer, who calls back to be greeted with a booming, “OMG!”

And the camper who nails every phys ed challenge and just delights in the applause. Or the camper who keeps hoping someone will let him drive the golf cart, not just ride in it.

But some of the successes were harder for newcomers to see. Like the camper who spends most of her days at home in her room, and at camp had her own retreat space, but joined the tie-dye group for a walk one day. Or the camper who wears a foam helmet because he can hurt himself if he gets too excited. Joining in group activities would be too much for him but he was group-adjacent most of the time.

“We don’t want them to think, ‘Oh, if I have a really bad day on the first day, I don’t have to go back,” because they’ll never leave their house. They’ll use that as a coping skill,” said Quinn. “We are prepared as much as we can be. And they know what to expect. The routine is the same every day.”

This was Camp Wannagoagain’s 19th year, though it’s first at Camp Hoffman, the Girl Scout camp in South Kingstown. A Boy Scout camp in Pascoag had been the home for many years but it hasn’t opened the last two summers.

“The Girl Scouts came to our rescue with these two weeks here,” said Quinn. “It’s late in the summer and a lot of our staff are teachers and they have to go back in their classrooms a week after camp so we’re really grateful that they did this. But it’s worth it.”

Quinn dreams of the day the Autism Project can have its own camp, not just for two weeks in the summer but for year-round programming. And financial support is always welcome.

One such staffer was Amanda, who was the one-on-one for a young woman she works with outside of camp.

“I think camp is really good, especially for helping [campers] to learn socialization with peers,” Amanda said. “Out in the community, it’s an uncontrolled setting so everybody kind of has a higher chance of getting overstimulated. Here, there are expectations and it’s consistent and even if someone does feel oversocialized, they feel safe. Which is huge. It helps them learn how to learn how to be a team. I see huge benefits in that.”

“I really liked how they encouraged everyone to be independent in the activities,” said Logan Stevens, who was with James the other days of the week. “A lot of times I find it’s hard to create activities that everyone can be able to do independently. It worked because they used so many different resourcnes with visuals and verbal cues and reminders, making it accessible for all the campers.”

Ryan Silva, an adaptive phys ed teacher in Coventry, led the sports activities, which were built around an Olympics theme this year.

“I just love coming back, seeing the smiles on their faces, and making a difference in campers’ lives. I love allowing them to experience camp and fun activities with their friends and meeting new people,” Silva said. In terms of the sports activities, “some kids probably won’t be able to combine certain skills, but even if they just do one skill, that’s success for them. Individual success is the most important thing here. For some kids, even if they don’t participate, if they’re just with their friends and their teams, that’s a win for them.”

For James, who’d spent most of the past 17 months with his two 60-something parents, getting to hang out with other young people was a treat. And he managed to surprise his old mom. James is not a very physically adventurous person. But three different times during his week at camp, peer campers (there were 35 peer campers – typical kids – this year) got him to climb up a fairly steep inflatable water slide and then actually slide down … eventually.

As that Tie Dye team camper would say, “OMG!”