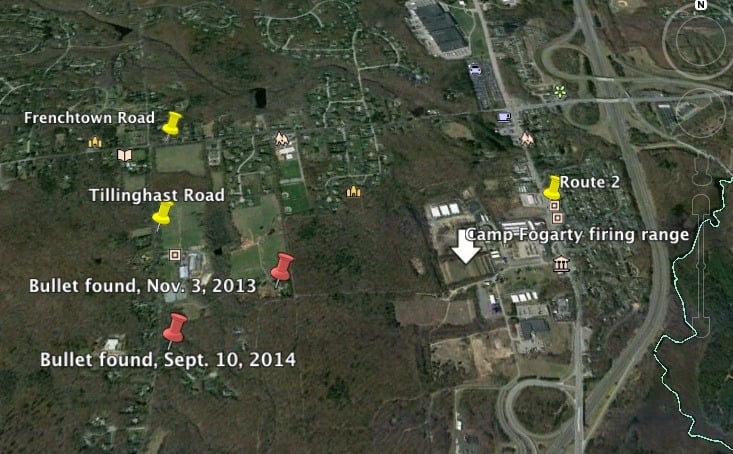 The Rhode Island National Guard is still investigating the incident of a bullet that found its way into the second-floor window of a house on Pardons Wood Lane Sept. 10. EG police believe the bullet came from Camp Fogarty, which is located less than a mile east of the house.

“More than likely it came from there,” said EG Police Chief Steve Brown. “Our report could not tie it down definitively.”

Based on the police report, the Rhode Island National Guard suspended use of the firing range, pending results of the investigation.

Bullets like the one found at the house – 7.62mm/.30” caliber lead – can travel miles, depending how they’re aimed, Brown said, noting that those types of bullets leave the barrel of a rifle traveling at about 3,000 feet per second.

“You can imagine, pointed up in the air, at a certain angle, it can go pretty far, pretty fast,” said Brown.

He said it was possible the Pardons Wood Lane bullet came from some other source.

“That’s why our report stated that we can’t definitively state it came from the firing. It could be a hunter, or somebody test firing a gun outside their house,” he said. “But everything we have points more from it coming from the firing range.”

The Capuanos have lived at 1 Pardons Wood Lane since 1998, and they have always been aware of the shooting range, which is 1,290 yards away as the crow flies.

“It’s not like it’s right in the backyard, but you know they’ve got range practice,” said Paul Capuano last week.

“Police told us there were Navy personnel shooting that day. There was activity at the range,” said Capuano.

Lt. Col. Peter Parente would not confirm who was using the range Sept. 10, saying that was part of the ongoing investigation. During a tour of the rifle range Wednesday, he did say National Guard units use the camp on weekends (whereas the Capuano incident took place on a Wednesday) and that the range can be used by anyone with a Department of Defense card and authorization to fire a weapon. Read more about firing range procedures here.

Capuano said he’d left two phone messages with the R.I. National Guard but, as of Oct. 9, no one had contacted him.

He said other Pardons Wood residents have expressed their concern, in particular a family new to the neighborhood, with two young children.

“They were like, ‘This is happening around here? What if our kids are out in the yard?’” Capuano recalled.

“What are the odds of that bullet coming in that little half-size bathroom window?” he said. “If it hit the siding of the house, it probably would have fallen down in the dirt and we wouldn’t have seen it. Or, are there others we haven’t seen?”

Paul Capuano points to the hole in the screen where the bullet passed through. It then hit the sill and ricocheted to the ceiling before coming to rest on the bathroom floor. Credit: EG News.

Chief Brown said the bullet appeared to be travelling relatively slowly by the time it came through the screen of the second-floor bathroom window. It struck the window sill, then the ceiling before coming to rest on the floor, where Capuano’s wife, Sharon, found it after arriving home from work around 5:30 p.m.

Soon after the Capuanos went public with the incident, they heard from their neighbor Midge Gordon, who lives at 888 Tillinghast Road. She found a bullet in her 2nd floor bedroom Nov. 3, 2013. She contacted the R.I. National Guard after the incident and they suspended range operations while they investigated.

“We believe we are dealing with a ricochet in which a round was fired, but while enroute to the berm in place on the range, encountered a rock, stone or some type of debris. We believe this caused the round to skip up in an arching motion and depart the range, thereby impacting your house. We believe that the debris became a factor due to repetitive firing on range which resulted in dirt (soft earth material) being slowly grazed away eventually exposing a rock or a stone.”

Callahan wrote that they inspected the berm and removed “virtually any potential ricochet hazard from the range.” He said “fiscal and engineering teams” would also be looking at building a new berm closer to the firing line and using packed sand as the primary material on the ranges. The status of those potential changes is unclear.

Gordon, whose house is 762 yards from the firing range, lived through an earlier incident when she and her husband owned the horseback riding facility next door. Ten or so years ago, bullets came into the riding ring while it was filled with young riders.

The instructor had the girls lie on the ground and crawl to safety. As a result of that incident, the R.I. National Guard made significant safety modifications to the firing range, according to Police Chief Brown.

Now that it’s happened again, and in her bedroom, Gordon is frustrated.

“I just feel it’s unnecessary,” she said in an interview last week. “We’re in a neighborhood. There are children, animals, people.”