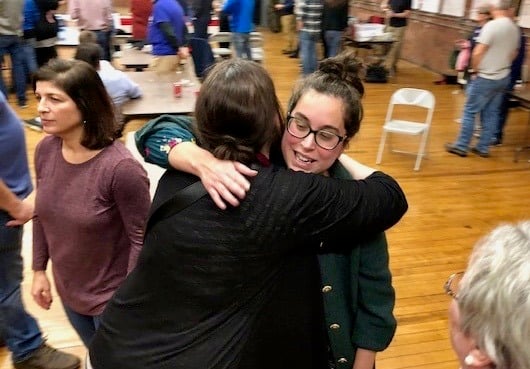 In one of the more contentious state races this year, newcomer Justine Caldwell (D) beat incumbent Anthony Giarrusso (R) Tuesday, 51 percent to 48.9 percent, for the House Dist. 30 seat, which includes all of East Greenwich and a small section of West Greenwich.

Giarrusso was elected in 2012 in a contested race but ran unopposed in 2014 and 2016. Caldwell did not finalize her plans to run until June but started putting feelers out many months earlier, including sending out press releases questioning Giarrusso’s stand on issues and going door to door to meet voters.

“I feel great. I feel happy about the campaign we ran,” Caldwell said Tuesday night at the Varnum Armory, where the EG Democrats were headquartered for Election Day.

When questioned about the divide in the electorate, Caldwell said, “I’m going to work hard to represent everyone. That’s why I campaigned at every door.” 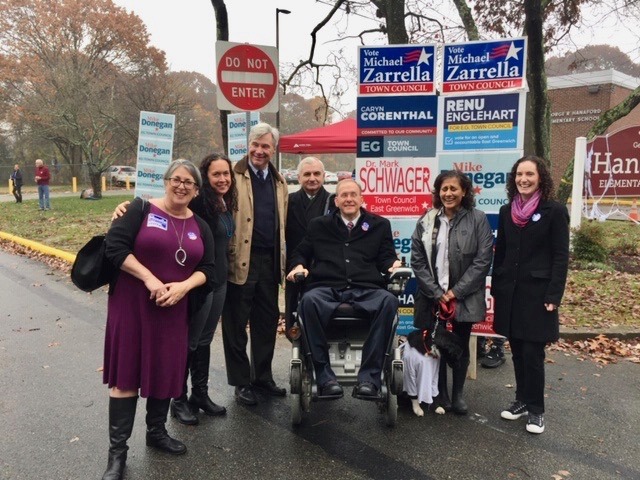 Democrat Bridget Valverde came in ahead of Republican Dana Gee, 53.9 percent to 46.1 percent in the Senate Dist. 35 race Tuesday.

Both Valverde and Gee were newcomers but Valverde began campaigning early in 2018 while Gee stepped in to run for the seat after her husband, Mark Gee, decided in June not to seek re-election.

Valverde lives in North Kingstown, one of the four communities to make up the Senate district (it includes EG, NK, and smaller parts of Narragansett and South Kingstown). Gee lives in East Greenwich. Gee did better in East Greenwich than overall, but Valverde still came in ahead of her by more than two percentage points.

It was a tough night all around for Republicans in East Greenwich, with hometown U.S. Senate candidate Bob Flanders falling to Sheldon Whitehouse, 43.3 percent to 56.6 percent in EG. (Statewide, Flanders lost by more than 20 points to Whitehouse.)

Find all the results here.