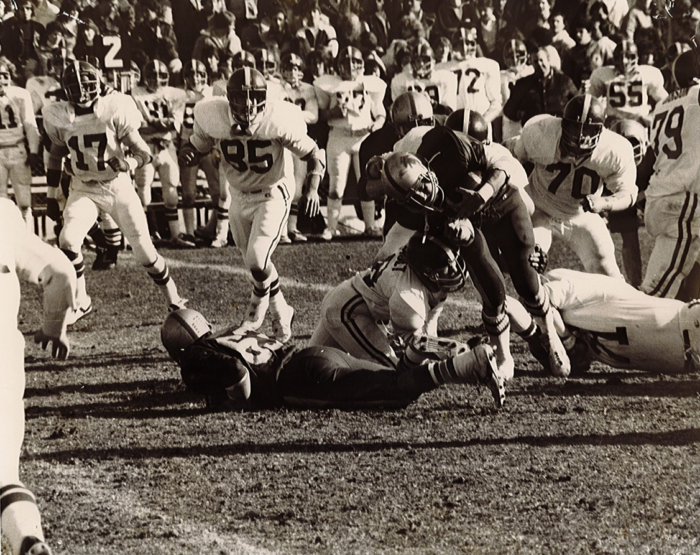 Above: Kenny “Bubba” Mahoney breaking a run vs East in Thanksgiving Day Game.

Came across an email the other day. Came to me a year ago or so. It woke up memories of a good year, and a good bunch of kids. It awakened in me a story and I want to relate it to my grandkids and any kids who will listen. Maybe, even, a few oldies can relate, or relate it to their kids and grandkids.

My grandson is going through a rough patch now. Football is ending. Probably the last he will play. The Marines rejected him initially. He graduates college in May, finishing up in three years. His life stretches out on a long trail in front of him. He made Dean’s List every semester so I know he will be successful whatever he chooses.

But … I want to give him this gift. A saying from his grampa. And a story of another boy, who was told he couldn’t make it. Some of the men reading this who were teammates and schoolmates also may have been told the same thing. They are all successes today. I want to tell him this :

Rejection is just another chance to prove to people they were wrong! – BRM

Bubba came into my office. He was a halfback on a team that went 10-0 in the regular season. He was 5-10 and 190 lbs. One college coach said that size player was “a dime a dozen” and wasn’t interested in his services.

Bubba was a hyperkinetic kid. Could talk the ears off a jackrabbit. He was half Italian–half Irish. That’s a volatile mix. The kid was a bundle of energy.

Like a lot of kids during that time, he had adapted the talk and rhythms of the rap culture and used to do impressions of the rappers during team breaks and in the locker room.

Oh boy, I thought. Here we go. Where is this going to lead.

“Let me hear it, Kenny.” (Kenny was his given name). And hear it I did. It was five minutes long. It was also good. I liked it and said that he could perform it at the banquet.

Well, it being Cranston, and it being that the team had experienced a lot of losing before I came. And, it being that Cranston is a political city like I had never experienced, we had over 500 people at the banquet. Everybody loves a winner. I used to tell them that we (their coaches) loved them win, lose or draw. Everyone else, including their parents, only loved them when they won. Anyway, all the politicians were there. Mayor. Senators et al.  Not my bag of tea, but the parents loved it. The sun was shining on West. They loved their Falcons.

Bubba’s time came. He got up to the mic to do his Championship Rap. It was five minutes long. He memorized it. He didn’t miss a beat. He got a standing “O.” It would end up making his life.

A few weeks later as I was calling players in to see what their plans were for their future. I came to Kenny.

“What are your plans, Bubba? College? Work? Service?”

And then. One of my best intuitions. One of my best lines. Where do they come from, I don’t know. They are inside all of us and if you say them at the right time they can make a difference.

“Bull,” I said. “If you can write a rap like you did for the banquet and stand up in front of over 500 people and recite it and not miss a beat, you can do college work.”

To make a long story short, I had a contact at a junior college in upstate New York. It was a four-hour drive but I drove Kenny and another player up there with film, to meet the coach. Both boys were accepted to the school, but the other boy, unfortunately, dropped out.

As most of you know, junior college is a two-year experience. It took Kenny three years. But, another thing happened. He met a professor, who sparked that “light” that comes on for all of us at different times of our lives. That spark that puts learning on a different plane above the drudgery most people associate it with.

The football went well and Kenny graduated from Hudson Valley College and was picked up by West Virginia State. He headed south to finish his education and his football. BUT, more important to this story, Kenny “Bubba” Mahoney, the hot-shot half Italian–half Irish halfback, who finished his high school career 471 out of 472 in his class, and was told he was going nowhere ended up being named a COLLEGE ACADEMIC ALL AMERICAN!

When you read the little note he sent me, which, by the way gives me a better feeling than any money, trophy, or title ever did, you will understand why, in life, when you are dealing with kids, you have a tremendous responsibility and, as at least two people reading this can tell you, my first priority as a coach was to help as many kids as I could. The second was to be the next Bear Bryant.

I failed at the second but when you get a note such as I got from Ken, it still makes you feel oh so good. As good as winning anything ever! Here’s the note:

Hi Coach,
I hope you and Mrs M are doing well and are safe and healthy!
I had a dream about you the other night. It was a big game and I did something that you were happy about. That is about all I can remember.
Thanks again for everything you have done for me throughout my life. You have no idea of what an impact it has made.
Love and best wishes,
Stay safe.
Kenny “Bubba” Mahoney 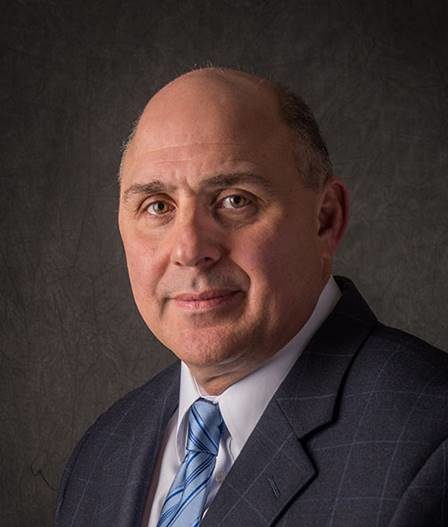 Half of being a success in life is to show up. The second is to persevere. Bubba showed up. It took him a little longer but he showed talents that his high school teachers couldn’t see. That one request of his ended up changing his life. He fulfilled my request for any and all of my players.

Not being a pro but being a successful father, husband with a family, and being a contributor to your community, to your state, to the world. Then you are truly a success in my eyes. Ken “Bubba” Mahoney has done this along with several other of his team mates.

It’s why sports are important. They truly are an important part of education. What didn’t show itself in the classroom, showed up on the field and eventually proved to be a turning point in Bubba’s life as it has been for many other young men.

Mens sana in corpore sano. A sound mind in a sound body. It is the ideal we should have all kids strive for.

So, for my grandkids, nieces and nephews: Show up! Stick it Out! Don’t let anybody tell you that you can’t do something. You know what you are capable of and most of us are even more capable than we think we are.

If you get rejected, dig in and work harder. Rejection is just a chance to prove people they were wrong. Tom Brady, Aaron Rodgers, Steph Curry, Dustin Pedroia, Baker Mayfield, Cam Newton were all rejected at some point. Told they couldn’t make it. Not given a scholarship. Drafted low. There were a lot of others.

One of my personal heroes was a little, small Texas boy who was rejected by the service six times. He finally got into the Army and went off to fight in World War 2. He captured hundreds of enemy soldiers. He killed plenty more. He ended up as the most decorated soldier of WW2.

His name was Audie Murphy. He later became a movie star in Westerns.

As you graduate and step out into life, remember, you can do anything you put your mind to. Good luck in your life. Grampa hopes to be able to see at least some of the rest of it.

And, Bubba, thanks for the reminder.

With much love, in the heart of all that is, and in the spirit …