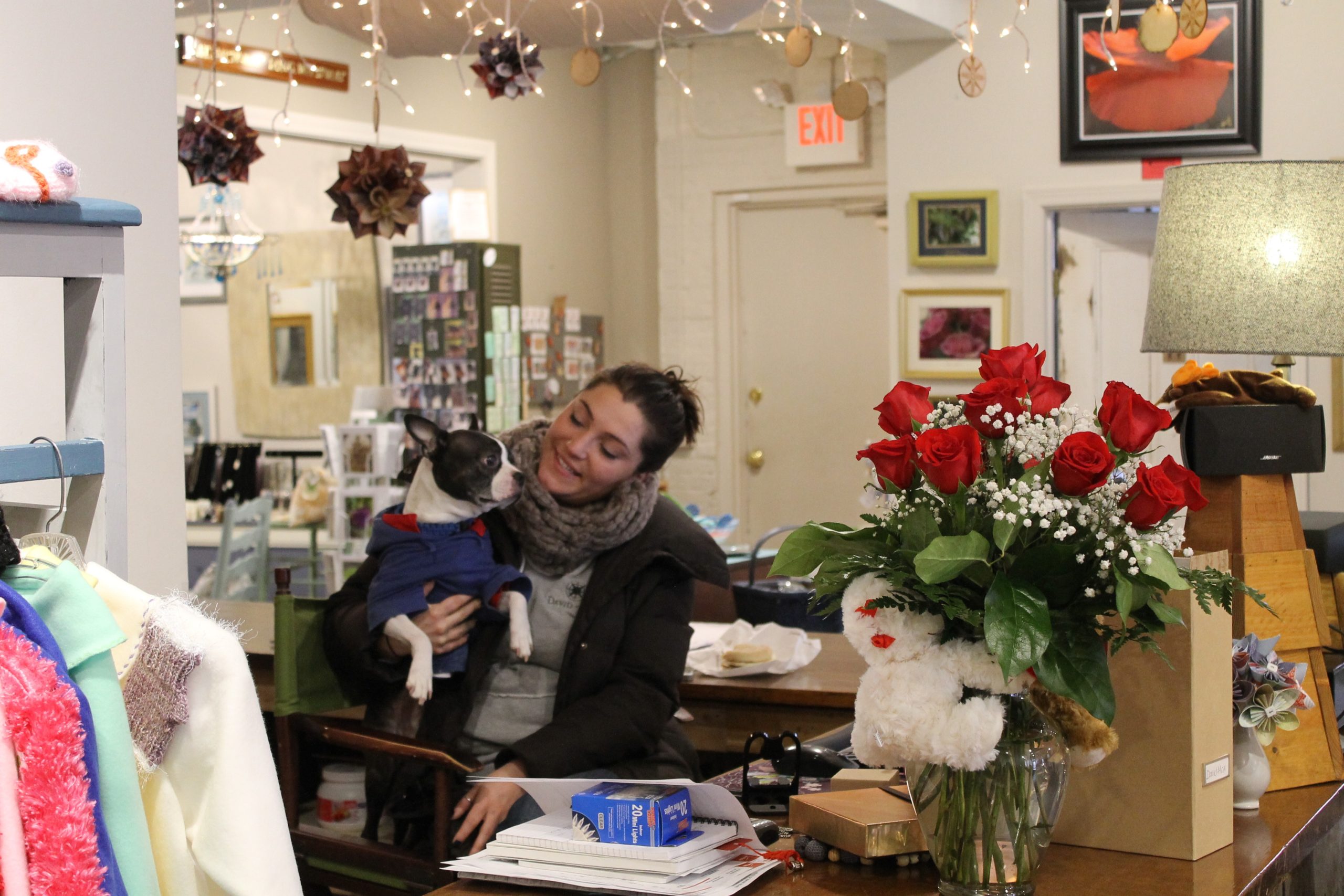 A Boston University sports fan dropped David-Max to pose for a picture with the school’s field hockey team mascot.

“Brolin,” the Boston Terrier who doubled as the mascot for Main Street’s David-Max and the Boston University women’s field hockey team for the past year, is sidelined from both jobs after an attack by another dog resulted in his left eye being removed in surgery.

The little black-and-white terrier owned by Courtney Grady-Calcione, owner of David-Max, 187 Main St., is resting at home these days recuperating from his surgery.

“He is doing well, and he is in great spirits,” said Grady-Calcione. “He spends a lot of his day sleeping, resting. He’s fine. Now it is a matter of him having the ‘man flu’ and milking it a little.”

Brolin, 5½ years old, was an impulse purchase for Grady-Calcione one day when she was at the mall to buy a pair of shoes to wear on a cruise.

“I walked by the pet store and saw this little puppy sitting all by himself in a big cage, shivering, and that was it for me,” she said. “I am such a soft touch. I went to the mall to buy a pair of shoes and come home with an $1,800 puppy.”

Brolin quickly established himself in David-Max. He walks around the place like he owns it and he loves to cuddle with Grady-Calcione when business slows.

“He is such a well behaved dog; I’ve never had training for him,” she said.

And that strong character and friendly demeanor caught the attention of one of Grady-Calcione’s friends who works in the Alumni Office at Boston University. Brolin appeared in videos for the school, posed for pictures with fans, made appearances on the field and performed during the pre-game warm-ups by chasing balls to amuse the fans.

The job was his until the attack two weeks ago when Grady-Calcione’s roommate walked the dog for his daily exercise. She called Grady-Calcione to tell her the dog had been severely injured.

“We brought Brolin to Ocean State Veterinary Specialists (in East Greenwich) and at first they thought they could save the eye, but after we got him home the iris ruptured and started to bleed,” she said. “We brought him back and he had surgery.”

The surgery cost $2,800, which is a big bite for a small business owner – the store sells home goods and good produced by local artisans – so Grady-Calcione created a fund-raising site to  defray the cost of hi

Brolin’s future as a mascot for BU is uncertain, Grady-Calcione said. But he will continue his job at the store welcoming customers.

“I just don’t know if they could use him going forward as the hockey mascot,” Grady-Calcione said.

Grady-Calcione is designing a new logo for the business that is in the style of a traditional tattoo with Brolin wearing an eye patch.

He may be have lost an eye, but Brolin will still be styling.

Finding the amusing in a hard situation, Grady-Calcione said with a laugh that Brolin has a double tooth near his canine incisor on the left side of his mouth.

“So I tell people I have a one-eyed dog with a double tooth; God compensates,” she said with a laugh.

The web site for David Max with updates on not only the store, but also on Brolin is at http://www.david-max.com.